May 28, 2019 Updated with the final price the world’s most dangerous laptop sold for.

If you were going to spend $1.3m on a PC what would you look to get out of it? Obviously you’d want it to be able to run Crysis, but you’d also be expecting some serious computational chops on the scale of a monstrous server machine. Maybe something that will ray trace your games at 144Hz on a 4K screen, or render 8K special effects without breaking a sweat.

But what you might not be after is a Samsung netbook (remember them?) so infested with the world’s most dangerous malware if you were able to connect it to a network it would take any linked computer down before you can say Matrix. But, in an online auction, The Persistence of Chaos 10-inch NC10 netbook was made available for anyone to buy, and the final, winning bid was a hefty $1,345,000.

In order to get around the fact that this is arguably the world’s most dangerous laptop, and someone is set to make a quick buck off it, the machine in question is being auctioned off as art. Hence the borderline pretentious name.

On The Persistence of Chaos (via Gamereactor) are six of the most costly pieces of malware ever spread, with a combined bill of $95bn between them. You may recognise some of them… there’s the ILOVEYOU virus, the MyDoom and SoBig worms, the WannaCry ransomware, the DarkTequila malware, and the BlackEnergy rootkit which caused a large-scale blackout in Ukraine back in 2015.

Read more: These are the best gaming monitors around today

Think of it like the Arkham Asylum of malware, and you can play Batman by purchasing the netbook for an exorbitant sum in order to keep them out of the public domain and inflicting more damage on the world. Though obviously at some point the malware will escape the confines of the asylum/netbook and run amok, leaving you to don your cape and take them down.

Or maybe I’m overthinking this. Or underthinking. One of them. 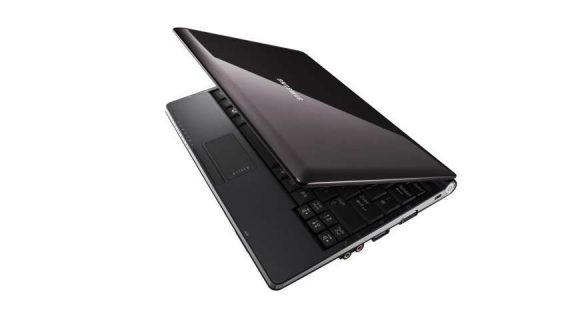 To avoid this box of delights being opened again the artist, Guo O Dong, will airgap the netbook prior to shipping. This is the process of removing any network interfaces from a potentially dangerous device, kind of like a digital muzzle for a rabid dog.

“Upon the conclusion of this auction,” the auction page reads, “and before the artwork is shipped, the computer’s internet capabilities and available ports will be functionally disabled.”

The livestream of the nightmare laptop is still going, which might actually mean the device is potentially still active and dangerous. Maybe someone should keep an eye on the stream just in case it manages to find a rogue ethernet cable from somewhere and get online.

But if you did bid for the dangerous machine you had to pinky swear that “you’re purchasing this work as a piece of art or for academic reasons, and have no intention of disseminating any malware.”

I have to say I was kinda hoping there would be some kind of bonus performance art once the timer hit zero, but nothing has happened and the laptop is still sitting there on the livestream. If this were a Banksy auction there would have been some kind of explosion at least.

If you missed out on this marvellous opportunity to hold the world to ransom like some latter-day Bond villain, or didn’t feel you could justify spending over a million dollars on a dangerous netbook, it’s actually very easy to make your own. This one’s sold for just £50, and there are others out there. All you need do is disable the built-in and third-party security features, go searching for torrents, and watch some pr0ns for an hour. That should see you nicely malwared up on the cheap.

Then you’ve just got to give it a pretentious name – The Illusion of Safety works for me.