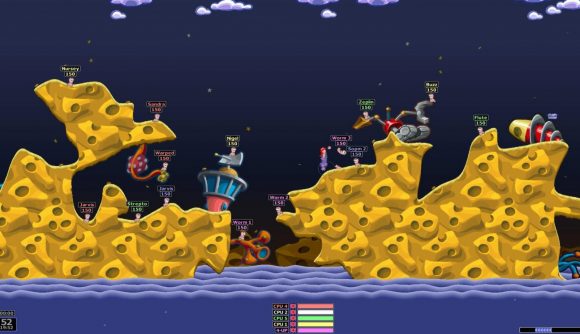 Remember Worms Armageddon, Team17’s turn-based tactics game about little pink invertebrates blasting bazookas and flinging holy hand grenades at each other? The strategy game’s turned a whopping 21 years old, which means one thing – it’s got an all-new patch. Yes, you read that right – now, in July 2020, we’ve got more Worms Armageddon fun to delve into thanks to patch 3.8.

As announced on Steam, the update means the chance to “customise your matches in weird and wonderful ways” with a hefty batch of new scheme options – more than 70, in fact. You can tweak the game’s physics, the post says, send the artillery-happy anthropomorphic worms bouncing around the landscape, or even use more than just the one weapon in a turn. The thought. The only requirement for accessing these options is being a “seasoned Worms veteran” – so, completing single-player mode and unlocking The Full Wormage.

In addition, the wormy war game’s patch makes your little critters’ epic treks and flips around the map look sleeker than ever – with 3.8 you can “experience the fully silky smoothness of whatever frame rate your hardware can support”, the dev says. Lovely.

Worms Armageddon has also now got an all-new windowed mode, some handy streaming options, CPU teams for online games, hundreds of fixes, various changes, 61 new features, and some compatibility adjustments making it easier for anyone to dive in, regardless of rig.

As if we'd ever forget our turn-based Worms fans!

By popular demand you can now celebrate the 25th anniversary of Worms with a huge free update for the one, the only…

Plus, there’s a new ‘Mapshot’ option which lets you essentially take a capture of a map’s current state – no matter how demolished or devastated by wormy warfare – and keep it of launch another match on. Neat.