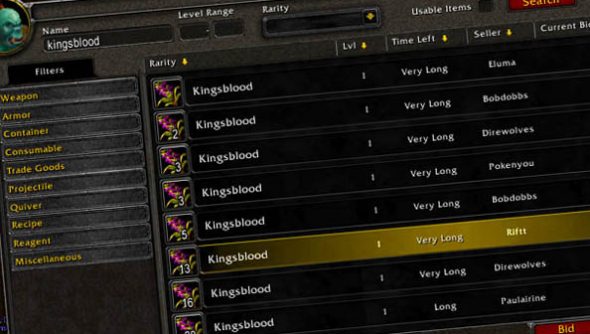 Alarmed whispers in the dead of morning yesterday had it that World of Warcraft’s Mobile Armory, which flatpacks the game’s auction house for ease of profit in motion, had been compromised. Now Blizzard themselves have reported a slew of unauthorised account logins via both the mobile companion app and the official WoW site.

The Big B are in the process of notifying affected players, knocking on doors and firing off emails with instructions for the resetting of accounts. They’ve also pulled down mobile access to the auction house for the time being – though it’ll remain open in-game and through the game’s official site.

Huge quantities of gold have been laundered from hacked accounts via overpriced junk items. Thankfully, WoW customer support will restore in-game items and gold upon request.

Blizzard seem to imply that players in possession of a battle.net authentication doo-dah – the subject of a recent lawsuit which deemed them necessary for account security – have been sheltered from the storm. However, some players have reported losses of hundreds of thousands of gold despite having secured their accounts with authenticators.

“While no means of account security is guaranteed, every precaution you take to secure your computer and your account – including changing your password periodically – adds another defensive barrier,” say Blizz, with a wag of one massive finger.

“We strongly encourage everyone to take a few moments to read through the security tips available on our support website and follow the suggestions posted there.”

Sage words that come more than a few moments too late. If you’re a victim of this recent round of hackings, let us know in the comments.