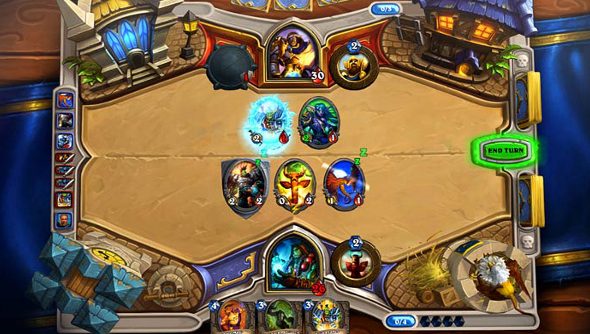 If you’re not already playing Hearthstone, there’s a good chance that you’re slowly descending into madness. Perhaps you’ve vandalised a deck of playing cards by drawing the faces of Warcraft heroes on them so you can pretend that you’re playing. You’re insane, obviously, but I understand.

Open beta draws ever closer, though, and with it, your chance to finally play. But it’s not quite ready yet, as Hearthstone production director Jason Chayes revealed in a post today. “[T]here are still a few things that have come up that we want to fix before we leave the closed beta phase,” he explains.

“[W]e believe the right thing to do for the game is to not rush it out into open beta, but to instead hold onto it a little longer to make sure it’s ready for wider testing,” Chayes continues. “At BlizzCon, we mentioned that we hoped to get the game into a state where it’s ready for open beta this month, but we’re just not quite there yet. The development team has been working hard to get this out before the end of the year, but our highest priority is that Hearthstone has an awesome launch when all gates are lifted and everyone can download it and play at the same time.”

It’s close, though. Very close, Chayes reassures everyone. And to soften the blow of the delayed open beta, Blizzard has sent out closed beta codes toeveryonewho opted into the beta test prior to Monday, December 16. If you haven’t received your code yet, make sure to check your span folder and ensure that it’s the address you have connected to Battle.net. If, after that, you still can’t find it, then don’t worry too much. Blizzard will be making a list of every account that opted in but hasn’t activated their code, and flagging them for beta entry in the first few weeks of January.

Furthermore, if you opt in before January 7, you should get an invite some time before the closed beta ends and the open beta begins. So it looks like you’re actually going to have to be really forgetful to not get a chance to play. If you’ve yet to opt in, you should probably do so now.

{"schema":{"page":{"content":{"headline":"The Hearthstone open beta has been postponed, but more closed beta invites are being sent out","type":"news"},"user":{"loginstatus":false}}}}