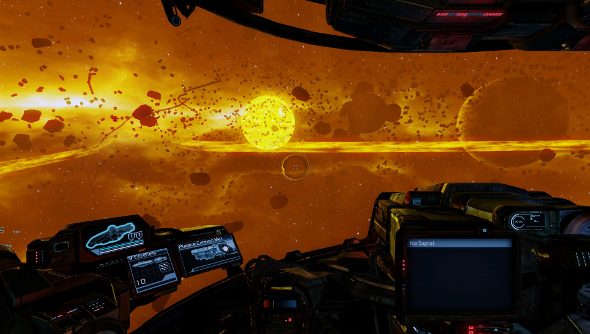 I’m zipping in between gargantuan floating monstrosities, dark cities and factories dappled with tiny fluorescent lights and advertisements, trying to avoid the space lanes filled with traffic and patrolling police. Lights are blinking in the cockpit, a minor distraction, but my focus returns as a target pops up in front of me. I’m chasing a ship, and it almost gave me the slip.

I fire my plasma cannons and, with a dramatic explosion, it’s nothing more than floating detritus. I pick up the conveniently dropped cargo it carried and plan my next move. Map called up, I wait, but nothing happens; somehow I have sunk inside my chair. Frustrated, I go back to the main view, but I am instead transported to a slide show. It also transpires that my trade transport ship is stuck. In this great big galactic sandbox, where you can be a trader, bounty hunter, business owner or hero, you’ll likely spend most of your time fighting bugs.

X Rebirth has had a complicated birth. 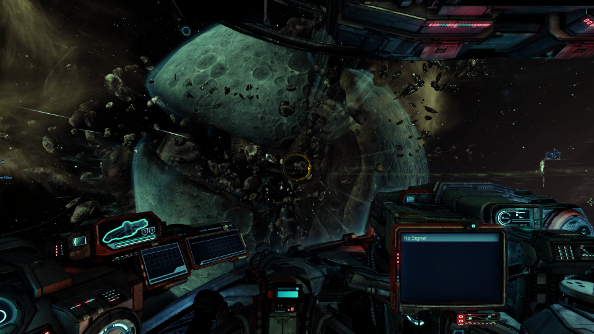 One slightly broken tutorial, one restarted game and countless reloads after I began my journey through the stars, anticipating, mildly sweaty, the magic had worn off. It’s terribly optimised, poorly explained and riddled with bugs; it’s just not finished. But it’s still space, a galaxy ripe for plundering or for a wiley capitalist to corner its many markets. There are moments when I am at peace, just enjoying the sci-fi journey, but it’s one riddled with insurmountable problems: both game design and bugs.

As a visual reboot, X Rebirth has the power to impress. The populated chunks of space in previous X titles have been grand in scale, but not very lively. Rebirth is full of ecosystems – even if a lot of its window dressing – with bustling space lanes filled with queuing ships, lumbering freighters floating from station to station, garish signs flashing information and commercials at passing vessels and huge, serpentine highways that launch pilots towards the next sector at astonishing speeds.

The huge stations that dwarf passing ships are stunning, complex arrangements that look just like the sort of thing I’d want to build out of Lego with an infinite amount of time and a constant supply of bricks. Watching the tiny insect-like ships swarming them, going on shopping trips, hiring new crews, getting to work and feeding off the goods and services found in abundance in these structures is a great way to unwind after dealing with a bug or an obtuse menu. 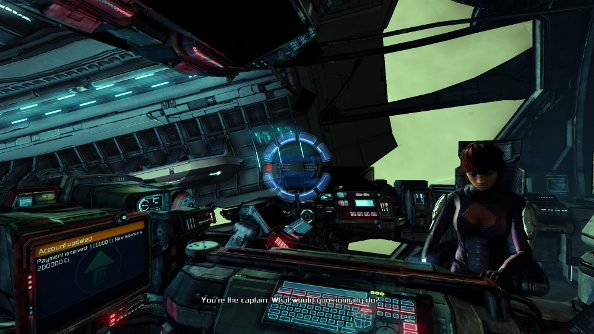 Rebirth’s good looks do not extend indoors. Character models are terrifying, clay-faced horrors who spout empty platitudes and insults with the conviction of someone speaking an alien language. The stations they inhabit are equally ugly on the inside. Sterile corridors with dreary rooms leave little reason to visit, though frequent trips into stations is a necessity for the purposes of trade.

I thought I could overcome my doubts in regards to Rebirth ostensibly restricting pilots to a single ship. It’s a reboot, after all, and what would be the point in such a title without some changes. I’m still not sure that I’m certain what the point of this reboot is, though. This is still an X game, through and through, tasking players with trading, building, engaging in huge battles and all the things you’d expect from an installment of this long running franchise.

The differences are found in the things that Rebirth doesn’t have or has inexplicably changed. You can still, by fighting poorly explained menus and orders, command multiple ships. You just can’t fly them. You can still trade, but since you can’t fly other ships, you have to order your own ships to drop off and pick up goods. It’s less efficient and makes everything take longer. 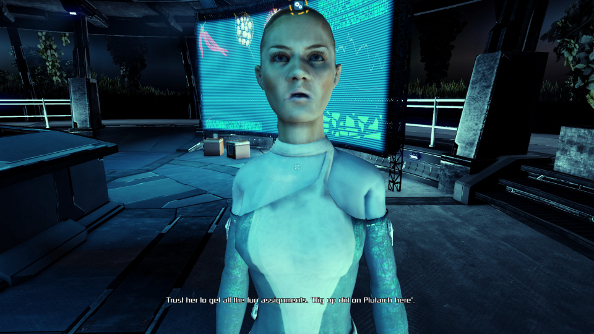 Bizarre omissions include a radar/minimap on the HUD – you have to check the main map, which is often bugged, and go through the same animation every time to swivel around and bring it up, physically – and SETA, the time dilation mechanic that sped everything up, which would have been especially helpful in regards to the sluggish pace of many of the ships.

So I’ve been stuck on the same ship, watching my other ships – sometimes – do things, wishing it wasn’t just a little bit crap. I’m already sick of the novelty of being physically inside the ship. There was something spine-tingly exciting about walking around my vessel, actually sitting in the chair when I needed to use the helm, or turning around to chat to my co-pilot, but it’s all worn off. My co-pilot’s a terrible bore and has no mechanical purpose, the ship’s tiny and not worthy of a wander and my view of space is obscured by dials, screens and a window frame.

A reboot needs to balance out what it removes with new, exciting additions. But I’ve seen little of that from Rebirth. And it certainly hasn’t improved on the original systems with its changes. I was under the impression that Egosoft was attempting to make this the X that newcomers could get the hang off more easily, but its lack of user-friendliness is one of its largest problems. 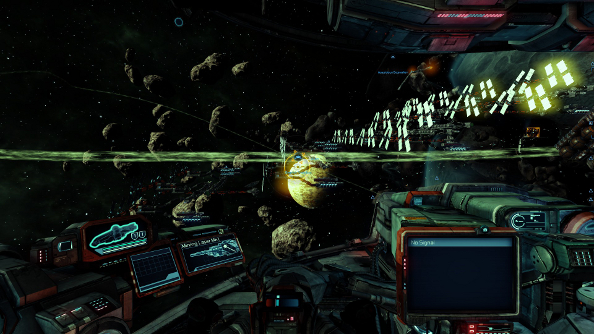 Important information is hidden beneath dialogue menus, there’s a dearth of tooltips and the tutorial is abysmal, ponderous and, at times, completely broken thanks to bugs or vague guidelines. I honestly can’t think of a single instance where Rebirth is less complicated than its older siblings. Combat, I suppose, is a doddle. I’ve been blowing up ships and probes left right and centre without taking any real damage. This makes it far from engaging, but it does give me the opportunity to take it easy and just admire the stirring dogfights and the accompanying light show. It’s also clearly been designed with a controller in mind, which is why nothing is convenient in Rebirth, as it pitifully attempts to cater to people who only have access to a few buttons.

A lot of my time stuck in space has been coloured by bugs and poor optimisation, though I can’t deny that I have some serious concerns with its design. The X series has never produced an installment that didn’t have a whole heap of issues at launch, however. The games are slow burners and creaky, to say the least, but usually flourish eventually. I thought that Rebirth might continue this tradition, as I was at least being drawn back into the universe with an explorer’s eagerness.

I was wrong. It’s a universe filled with boring people living on boring space stations, and playing in this universe is, unsurprisingly, really bloody boring. There’s not one thing that X Rebirth does that Albion Prelude or, indeed, any of the X games doesn’t do better beyond a few visual treats. Even when the bugs are fixed, the bizarre design choices will persist, as frustrating and counter-intuitive as they were at launch.