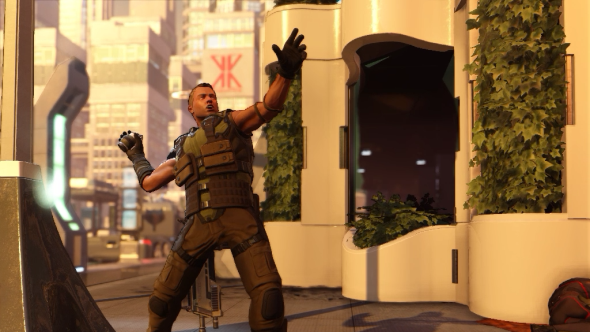 Central Officer Bradford doesn’t believe in bad omens. If XCOM’s sensors ever picked up a red comet streaking across the sky, he’d simply scramble the interceptors. But even in the presence of this unflappable deputy, something seemed off about Operation Blessed Mountain. The name, for one thing – as if the gods of procedural generation had rigged the dice for maximum irony.

John Bradford seemed sure about it, though, describing a routine VIP extraction in that calm baritone of his. We’d carry the target to the helicopter and be on our way. I thought of the practical sweater Central wore for the duration of XCOM 1, and felt reassured.

XCOM lead designer Jake Solomon once said that his game was “basically a 20-hour tutorial” for The Long War – a fantastically tough total conversion by modders-turned-indies Pavonis Interactive that both elongated and deepened the campaign. If that was true, surely my 70-odd hours in XCOM 2 would place me in good stead for the Firaxis-endorsed Long War 2? Surely. 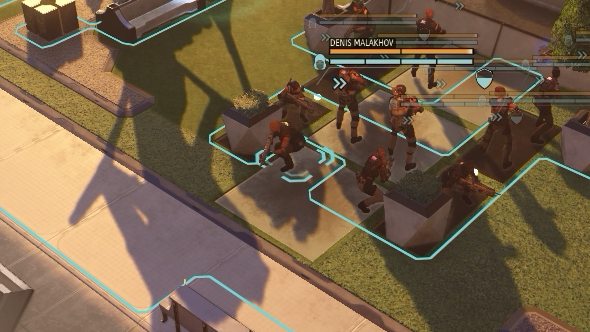 There are more squaddies here than there were on deck for Central’s 55th birthday. Keen to see a good chunk of The Long War 2’s feature set, I auto-filled the squad before battle to find out just how many soldiers it’s possible to field. The answer, a quick school trip headcount reveals, is ten – although some missions allow 12.

Already the friendly firepower vastly exceeds anything the base game would have granted. With more bodies than I know what to do with, I send them fanning out wide – my melee and assault specialists up the centre towards an oblivious enemy patrol, my heavy weapons crew creeping to their left behind an Elder statue, and my rifle-wielding rookies up onto the roof of the hotel to the right – just beyond which the VIP stands with her cavalcade. 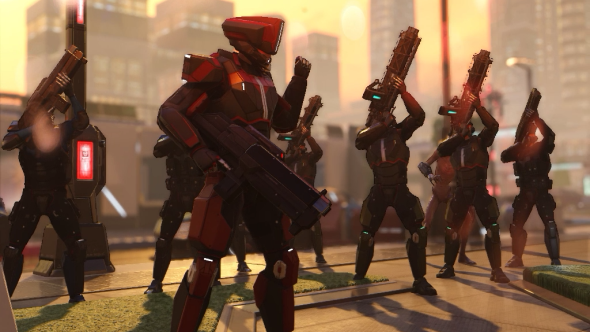 The manpower that felt so good at first can, it transpires, be a real liability in the concealment phase. I’ve got an extra set of people to hide from patrols, cameras and civilian grasses. And to make matters worse, there are armoured surveillance drones whizzing about. Thanks for that addition, Long War.

It’s hacker Molly Hill who steps on a red tile first. I’ve sent her to the rim of the hotel roof, above the lobby, to get a better look at our target. An ADVENT officer on the ground spots her at once, and a tangled network of nearby squads respond to his garbled yells. It’s tough to count the baddies as they run to find cover, but it’s clear we’re already outnumbered.

Molly immediately succumbs to sectoid mind control – a temporary reprieve for her, but one that tips the odds further in the enemy’s favour. Meanwhile, my assault team are sent sideways through a window into the hotel, where it’ll be more difficult for the ADVENT to bring their many weapons to bear.

From behind the statue, my Specialist emerges. A new class designed for Long War, she wields the Gauntlet – a dual-use flamethrower and rocket launcher. Alongside my Grenadier, she fires a salvo into the closest ADVENT squad, reducing the total number of nasties by four. But they’re swiftly replaced and then some by an incoming patrol from the north.

Eventually I count nearly 30 enemy soldiers and sectoids. On a ‘moderate’-rated mission, in the second month of the campaign. How has this happened?

I’ll later learn that Pavonis Interactive recommend you cherry-pick lightly defended missions rather than take on the majority. And that smaller squads yield faster infiltrations, whittling away at troop numbers still further – a self-balancing system I’ve utterly failed to engage with. To disastrous effect. 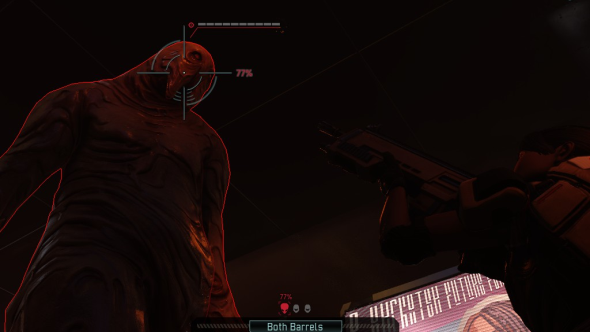 Poor Molly is dead – forced to hold still while the troopers shot holes in her. Half the civvies, meanwhile, bad enough when they were just yelling, have turned out to be Faceless in disguise – great big sentient blancmanges with claws. One of them gives my Grenadier a good thwacking, while another lollops after my close combat crew, squeezing his wobbly form in through the hotel window.

In those cramped quarters, I have my Ranger pull out her sawn-off shotgun – a new secondary weapon that can be fired just once with both barrels for massive damage. If it hits. Which it doesn’t. On the next tile, Gunner Angela Perkins produces her combat knife, another Long War addition – but it bounces off rubber skin like a kitchen utensil. So much for exploiting the new feature set.

There’s barely room to swing a talon, but the Faceless does so anyway, flattening our Assault specialist. 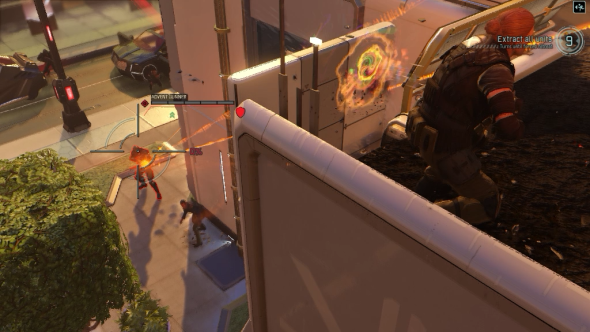 With the enemy count so high, and Central warning of further waves, individual aliens seem to melt away. There’s only the tide, the objective, and the evac point – a set of squares off to the top-right of the map that look impossibly distant just now.

The long-range arc thrower I could have used to incapacitate the VIP went down with our Assault specialist. But killing the target will be nearly as good – and, let’s be honest, much more feasible given the fraught circumstances.

Things aren’t going well on the roof – the aliens’ suppressing fire has quickly turned murderous. That’s why I’ve sent Denis Malakhov, a Russian recruit who joined the mission only to fill out the ranks, around the hotel exterior to the right. He’s nearing the cavalcade.

In the lobby, the Ranger sinks two rifle bursts into the flubbery torso of the Faceless. Angie ‘The Knife’ Perkins finally makes purchase with her blade, finishing the beast off and saving the reputation of secondary weapons everywhere. 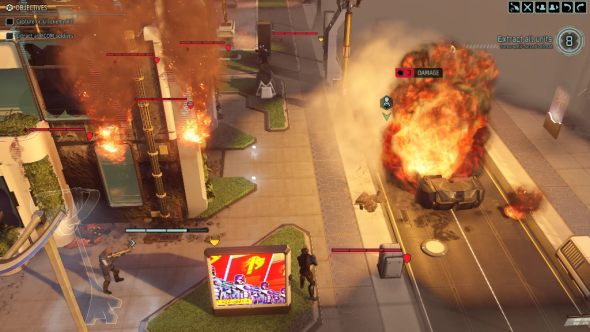 The buttress I’ve positioned Denis behind proves ample cover – keeping him alive while the rooftop rookies gurgle horribly. With most of ADVENT’s forces occupied there, only two overwatched troopers keep our young Russian from making line-of-sight with the VIP.

This is tactics, see? Cold and utilitarian, just like the base game. Although I must admit, the sense of sacrifice seems somewhat amplified in The Long War 2. Especially when you’re playing it this badly.

Angie-with-the-knife isn’t currently in play, having been disoriented by a drone. But Carol Serrano, a Spanish rookie hiding out in the lobby, makes short work of one of those troopers. Denis braves the laser fire of the other as he sprints out into the open, lobbing a frag grenade toward the passenger door of the VIP vehicle. The target is engulfed in flame, and Central’s congratulatory comms are drowned out by a prolonged moan of pain. Still, you take your victories where you can get them in this mod.

Oh, who are we kidding – nobody’s getting to evac 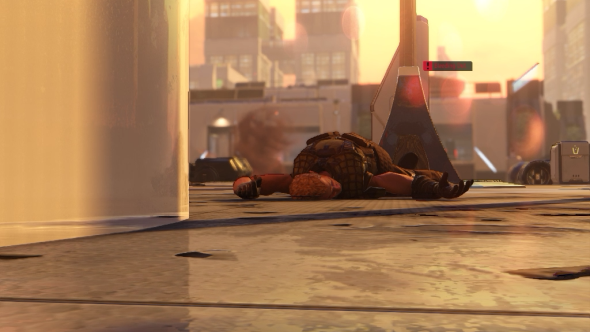 The ADVENT army fall upon Denis. He’s dead before his ragdoll hits the perfectly paved flags of alien-run Earth.

More Faceless swarm in through the hotel’s open window, and Knifey Angie is battered to bits. ‘Angela Perkins is no longer disoriented’, says the action log, but it’s small consolation. She’s regained her senses just in time to fully experience bleeding out in the lobby.

In the following turns, against the odds, Carol gets within squinting distance of the evac point. But it does her no good. As her comrades succumb to panic and mind control, she’s merely the last scrap of sentience to go in a largely automated mission resolution. I’ve somehow transformed XCOM into the Football Manager match engine.

As enemy turns play out for minutes on end – surely far longer than Firaxis ever intended – I turn to the document of Long War 2 tips and tricks I failed to consult before going in.

“Remember that not every mission is going to be winnable,” I read, as the last player-controlled character passes over to ADVENT. “You will lose soldiers and missions, but through careful planning and smart choices you can win the Long War 2.”

As an empty Skyranger lands back at base, Central chimes in: “We’ll have to work harder in the future.”

Too right. You’ll be lucky to hold onto your job, mate.

The Long War 2 is now available to download on Steam Workshop.