With XCOM 2 just around the corner and Firaxis revealing the extent of their modding plans on Saturday, one of the few people to have gone hands on with them has been posting on Reddit with some key facts. Rachel Norman, aka Amineri, is the lead programmer at Long War Studios, creators of the Long War mod, the three added content mods that are shipping on Friday with XCOM 2 and their own upcoming strategy game Terra Invicta.

Everything we know about and what we’d like to see when it comes toXCOM 2 mods.

Perhaps the thing most on people’s minds is the possibility of a Long War mod for XCOM 2. Amineri says that it’s “not really possible” to do a direct port because of how different the games are in mechanics, setting and so on, but with how much easier it is to code changes in XCOM 2, creating something of equal or greater scope shouldn’t be as hard.

“Map modding, custom Kismet for special mission types, new art assets, brand new UI interfaces — even tooltips on custom UI screens/elements is now possible. So, it’s less about what the tools allow us to do, and more about what [we] want to do from a design perspective, plus what we can do within some reasonable amount of time. Even though we now technically can do a lot more, a lot of those things require a lot of time.”

Time and, of course, money. I would expect they’re hoping to get some more regular work from Firaxis and 2K, depending on how well the game does and if people are into the additions they’ve made so far. It will be up to LWS to decide if they want to focus on pitching and creating a large expansion-style mod to XCOM 2 along the lines of Long War, or keep working on Terra Invicta. Personally, I’d happily pay for the former if it means it gets made. 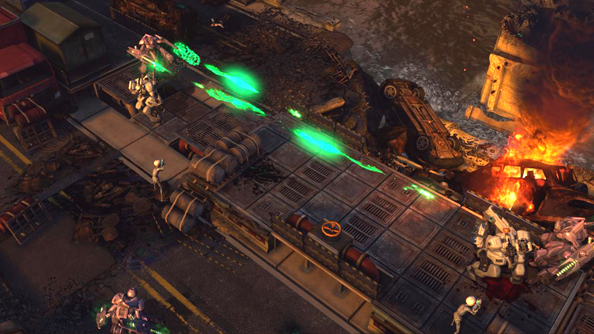 Amineri also revealed that there is some content from Enemy Within and Enemy Unknown included in the SDK. Specifically, things to do with gene mods and MECs, neither of which make an apperance in the sequel. These include sound effects, voice lines and icons, meaning keen developers can port over their favourite bits of the original game if they aren’t happy they got left out.

Amineri’s thread on LWS’ own creation, the stealthy SMG, reveals that they do serve a purpose beyond their increases to movement and concealment. They offer a half-way house between assault rifles and shotguns, having aim bonuses and negatives at short and long range that sit between the two. Essentially, they’re less useless across a map than a shotgun, and better when you’re up close and personal with the aliens than an assault rifle, but don’t do as well as either at their optimum ranges. It’s also said that the SMG will fit into the rifle weapon class rather than being its own as LWS didn’t want to get too complex with these first mods.

Plenty more info in all of her posts, and she seems to be regularly answering questions in various thread if you’ve got them.