The fundamentals remain – two actions per turn, full and half cover, destructible environments, etc – and it all works as well as we know it does. But as you will have guessed from its sudden announcement, low price point, and funky comic book art pumped full of acid purple, Chimera Squad is a very different XCOM.

The global scope of XCOM: Enemy Unknown and XCOM 2 is gone. In its place is intimacy: instead of the whole planet, your theatre is a single city; instead of shootouts in sprawling forests or sinister alien bases, your missions are urban raids, each divided into no more than three bite-sized rooms; and instead of a limitless roster of international soldiers, your base’s locker room fits just eight, recruited from a pool of 11. And these changes do mean some trade-offs.

If you’ve played either of Firaxis’s two previous XCOMs, you’ll know their uncanny power to make you care about randomly generated virtual soldiers. I know I do: a Classic Ironman playthrough of Enemy Unknown will do that.

Ryan ‘Whisper’ Grey was my squadsight sniper who seemingly never missed a shot and could always be relied on to finish the job. I would take 30%-chance-to-hit shots with him that I would assume anyone else would miss, and he would justify my absurd faith every time. Johannes ‘Gangbang’ Petersson was my unhinged Dutch assault trooper with pink-dyed hair who would run recklessly into every UFO and more often than not clear them out single-handedly. Rebecca ‘Scalpel’ Katz always seemed to be on hand to patch him up when it didn’t work out. Maybe they had a thing; I half expected the cutaway of the XCOM base to one day reveal a pink buzzcut bouncing rhythmically up and down through the steam of the barracks showers. 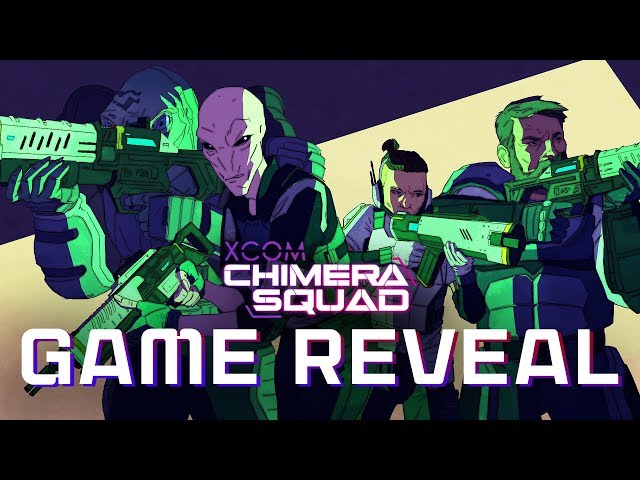 You get the idea. I wrote just under 6,000 words of exploratory notes in case I ever fancied turning their story into a novella. You won’t have that in Chimera Squad. What you have instead isn’t necessarily better or worse, just different: rather than being a bunch of random numbers from which a character emerges, each agent is a fully written character already. They have their own personalities, histories, and voice actors, all shown off as they exchange banter during missions and back at base. That’s when you see that their diversity isn’t just for show; it’s essential to the game’s premise.

It’s been five years since XCOM won the ‘War for Liberation’ in XCOM 2, freeing the world from ADVENT, the tyrannical government installed by aliens after their successful invasion in XCOM: Enemy Unknown. The remaining aliens, humans, and alien-human hybrids must now figure out how to share the Earth in a febrile peace, and your city, City 31, is held up as the model for this pan-galactic melting pot. The campaign has you defend its ideals against a plot to destabilise it. 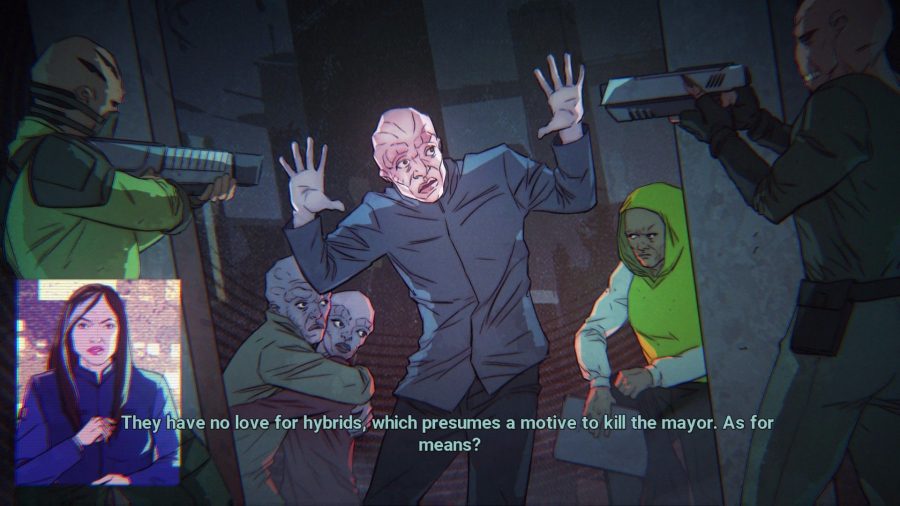 In having you ‘investigate’ three extremist alien, human, and hybrid factions suspected of attacking the city’s mayor, or assign agents to resource-gathering ‘spec ops’ with names like ‘legwork’ and ‘Elerium sting’, Chimera Squad adopts the vocabulary of the police or FBI rather than the military – not that you ever actually follow clues or make deductions. The challenge of the campaign is, again, one of managing steadily rising pressures: standing in for Enemy Unknown’s global panic and XCOM 2’s Avatar Project is City Anarchy, which increases every turn that one of the city’s nine districts is at maximum unrest.

You’ll manage that unrest by prioritising missions and clever use of strategic powers with long cooldowns. The campaign is at its most engaging when poo hits the fan in many districts at once: ‘if I take this mission I get an epic shotgun, but this one keeps this district from rioting. But I can prevent that anyway by using the Vigilance power. But then I’ll have no safety net if that district kicks off next turn…”

You’ll also develop field teams to grow your weekly income or unlock new research or spec ops. It’s a more elegant strategy layer than either of its predecessors, but, like them, it’s tuned pretty generously; I never felt even the remotest danger of actually losing the campaign. Besides, the Geoscape was never the highlight of XCOM 1 or 2; that’s always been the tactical missions, and Chimera Squad is no different. 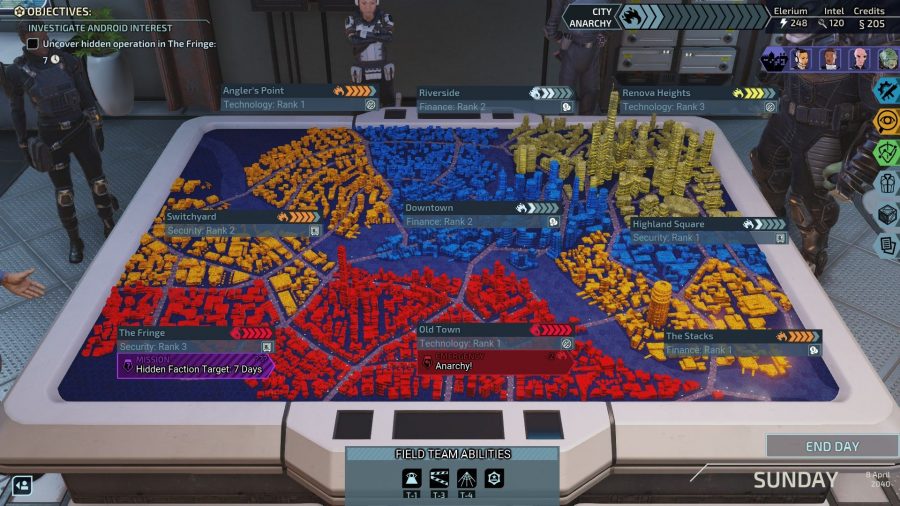 Each mission begins with a breach phase, in which you divide your squad of four (you never upgrade its size) among doors, air vents, and windows by which to bust into a room in dramatic fashion. Aesthetically, it’s a perfect addition to the squad tactics genre that cements XCOM as its most cinematic series, alongside its dynamic camera and a lovely eye for detail in character animations – enemy troops will jump and point at you when they’re flanked.

Related: XCOM 2 is one of the best strategy games on PC

Breaches also pose some interesting tactical questions. The order in which your agents enter determines the order in which they act on the following turn, but they each get one free action first. You can either shoot some bad guys, or use their breach abilities if they’ll win more advantage – if too many quick-thinking enemies are poised to take a shot back at you, for instance, the cheerful hybrid Cherub can safely absorb their fire into his riot shield and return it later with a potent melee attack. With the introduction of interleaved turns, breaches are also a rare occasion to make decisions for your whole team at once. 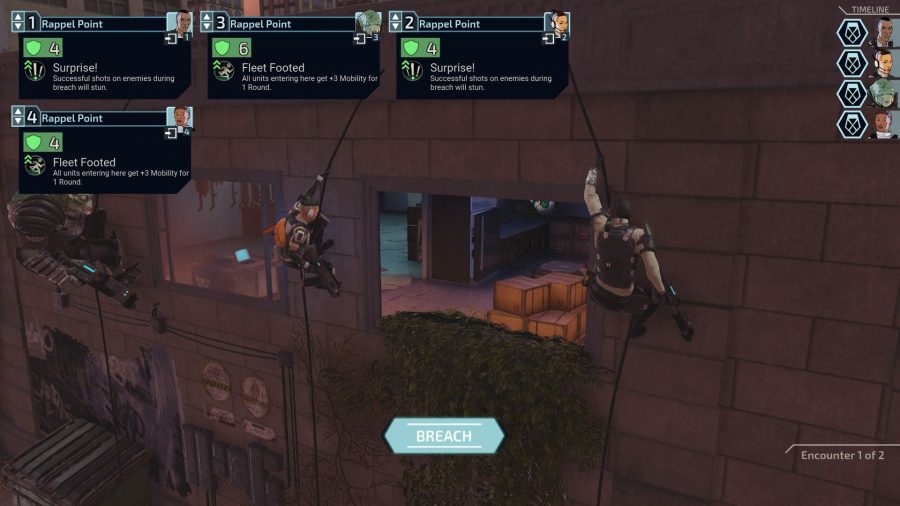 This move to interleaved turns – in which agents and enemies take turns as individuals, rather than as two groups – enables a whole new set of control tactics. The basis of this is looking ahead at the enemies due to act and taking them out, stalling the enemy team, but there are a range of complementary new abilities too: any agent can use Preparation (essentially the new Hunker Down) to get a defensive bonus and act earlier next round, and, once per mission, they can use ‘Team Up’ to give any ally the next turn. Plenty of agents have similar skills: the peppy millennial hacker Terminal can ‘Pin Down’ an enemy to delay their turn or ‘Cooperate’ with an ally to give them a single action immediately.

Using these abilities to escape desperate situations is deeply satisfying, and yet I think I prefer the old system. Things can still feel pretty desperate when a whole team of aliens emerges from the fog of war hefting plasma weapons at you, and I remember feeling more invested in concocting the solutions when they involved more moving parts. Previous XCOMs struck a nice balance of proactive and reactive, and while Chimera Squad offers new tactics and a greater sense of urgency, it shifts the pace firmly towards the latter. It’s improvisation, rather than tactics; crisis management rather than planning. In fairness, this may be a matter of taste – it certainly gets the adrenaline going at points. 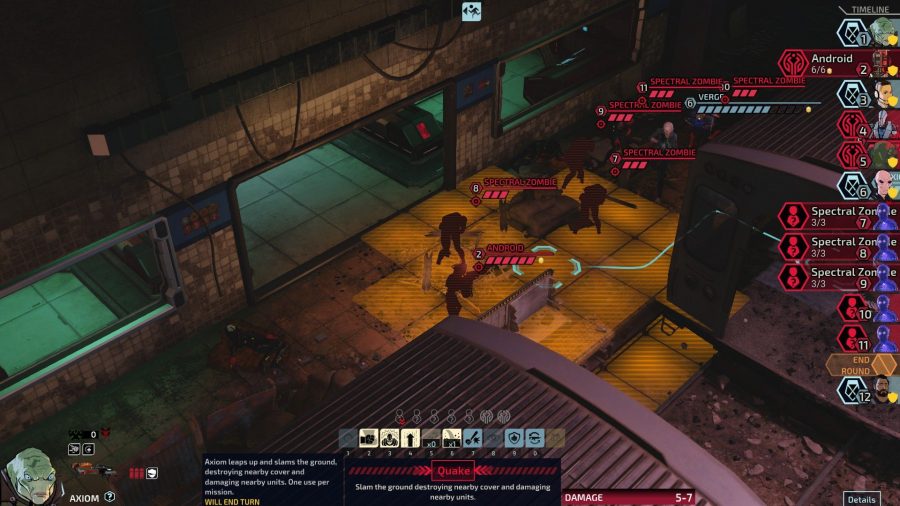 Rather than partake in generic classes, each of your 11 potential agents has their own skill tree, where you’ll see these imaginative new abilities mix with old favourites. The design here is excellent and makes these characters a joy to play with, but they’re not all useful at all times. Chimera Squad does a good job in nudging you to rotate your squad and play with everyone: you might want to put someone through training to bolster their stats or remove debilitating ‘scars’ they’ve picked up after a nasty wound, and sometimes you’ll come up against enemies that just don’t match their skill set.

In every one of his turns the dry-witted psionic, Verge, can knock an enemy out and induce another to attack their allies, making him disgustingly and joyously useful against organic enemies, but I’m obliged to rest him while investigating the robot-friendly Sacred Coil. For the most part you’ll learn these lessons when the stakes are low and you can muddle through without a plan – indeed, even on Expert difficulty, Chimera Squad is rarely too taxing. Often, the AI will ignore agents that are one shot from death to attack stronger ones, which can make victories feel cheap.

In many ways, this is XCOM defanged

Very occasionally though – especially in the ‘takedown’ missions that conclude each investigation – you’ll be surprised by an enemy you have no means of dealing with and have to restart, since you can’t move on if an agent dies now. This shift towards learning through failure rather than giving you information to conceive a plan feels a little odd for a tactics game, and deprives Chimera Squad of its predecessors’ savagery in forcing you to accept your losses. In many ways this is accessible, friendly XCOM. XCOM defanged. 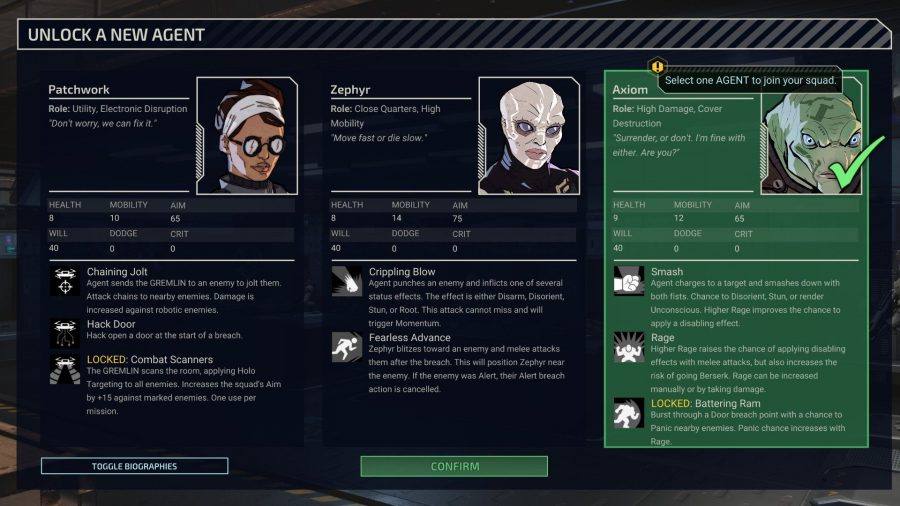 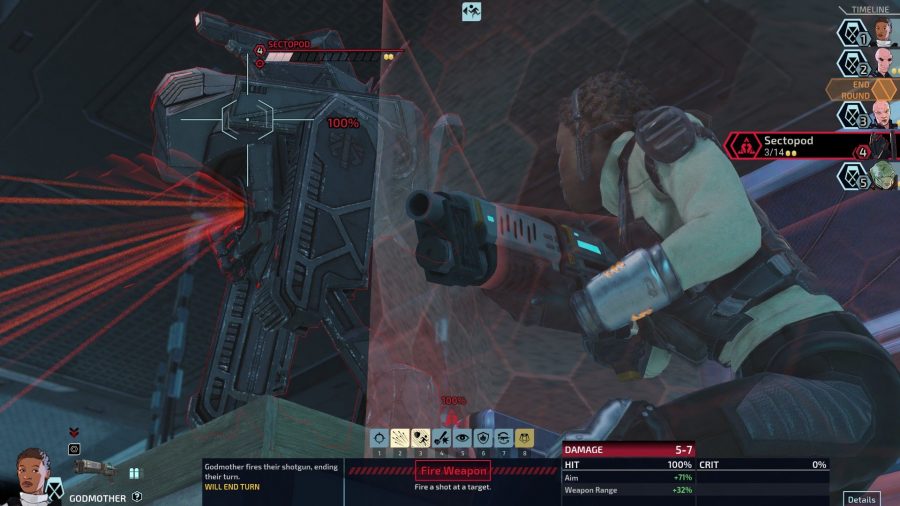 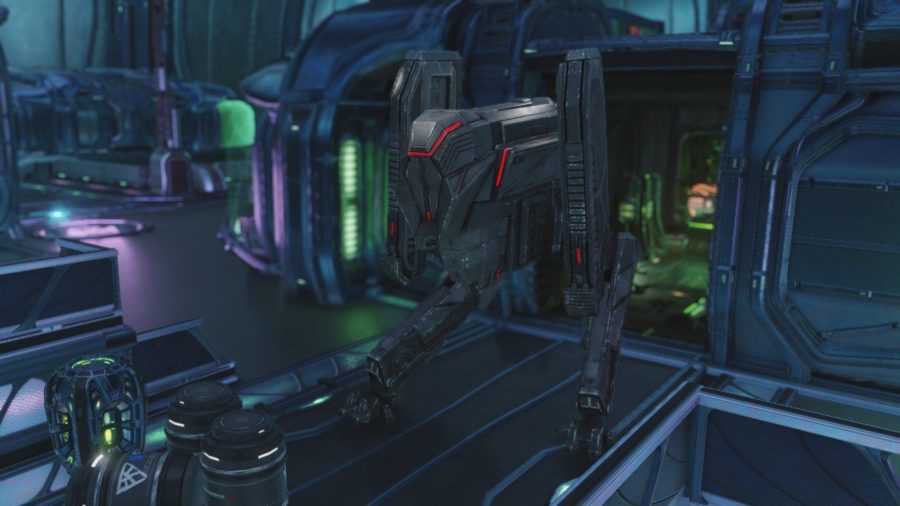 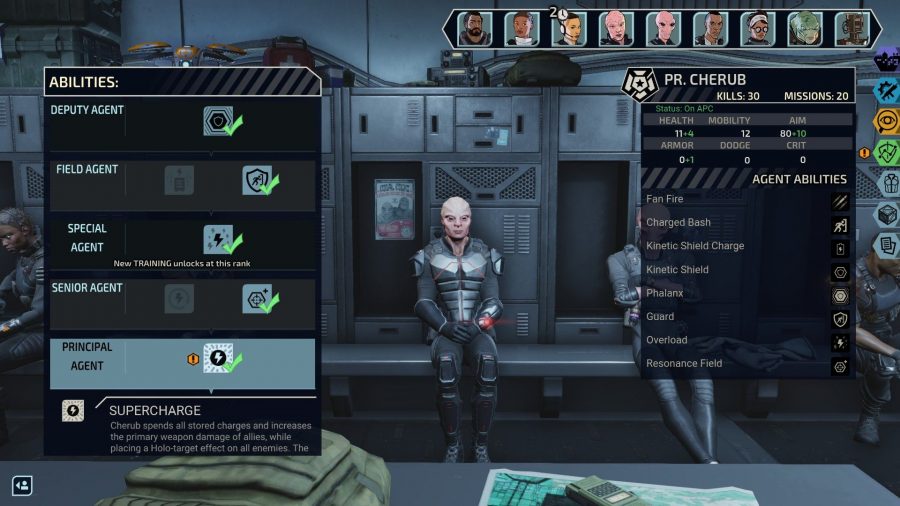 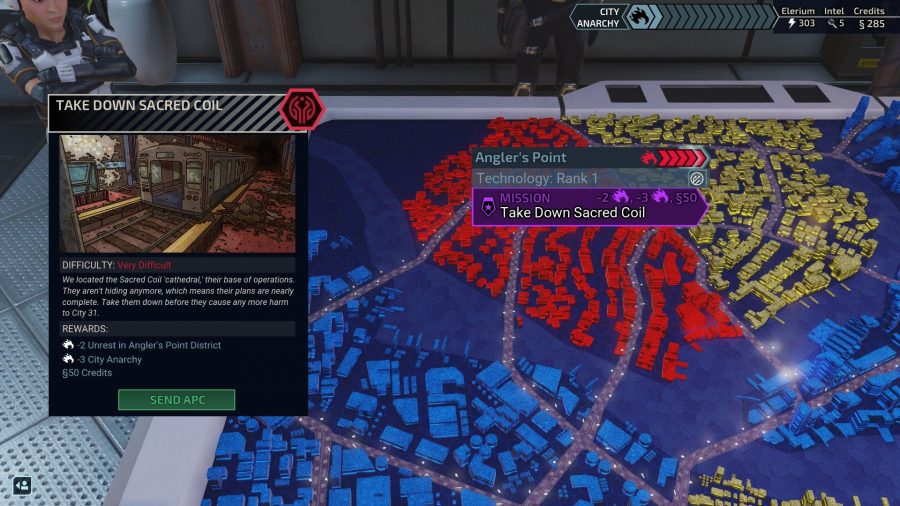 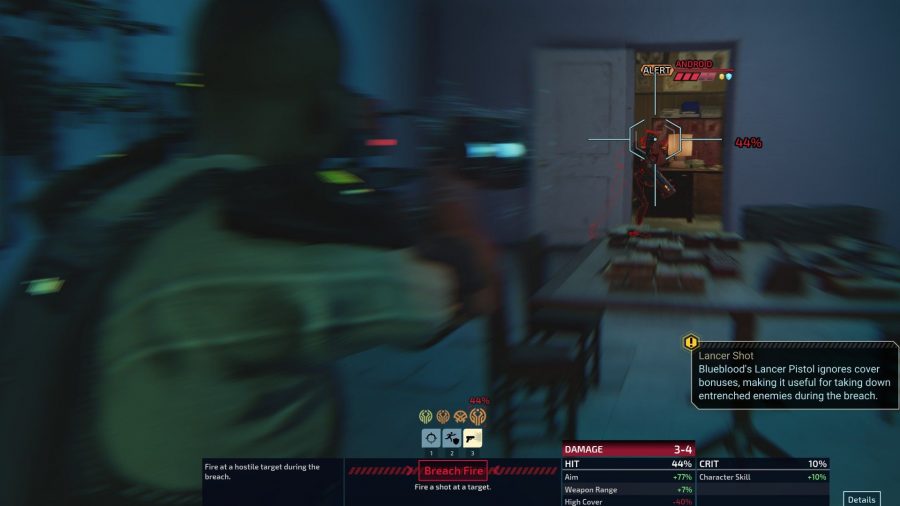 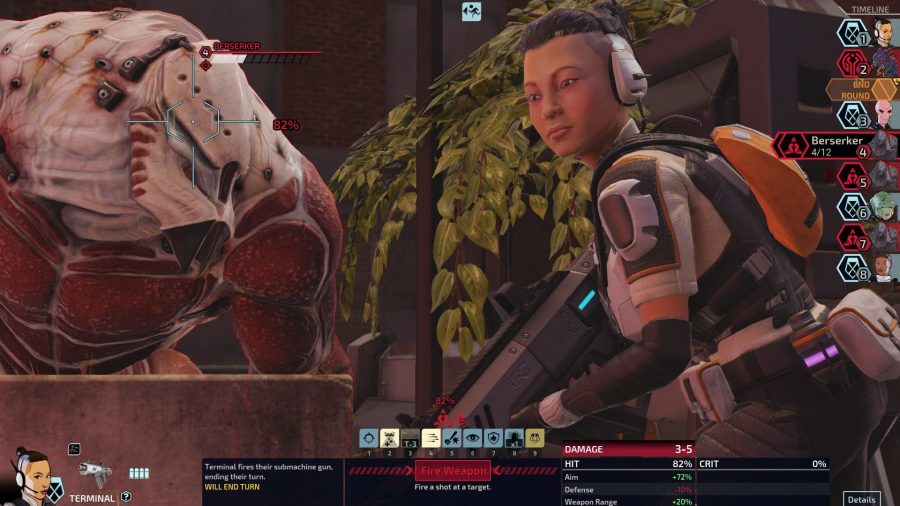 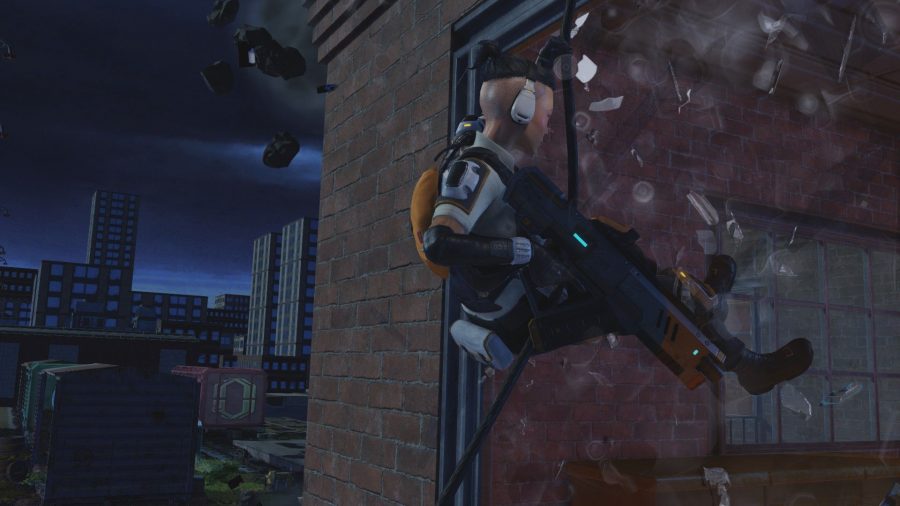 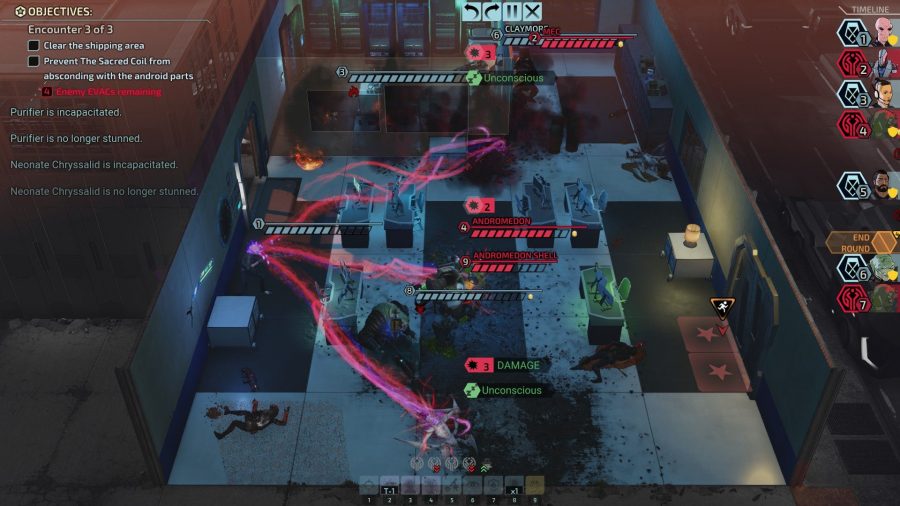 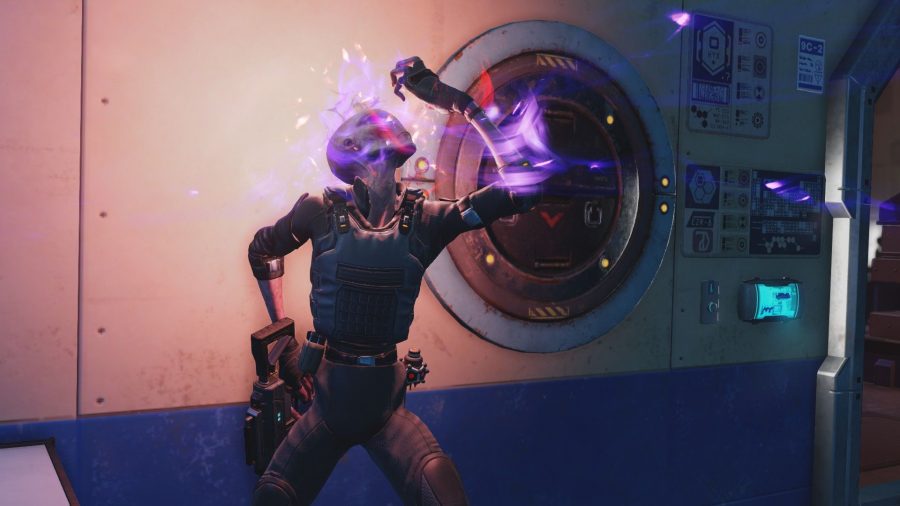 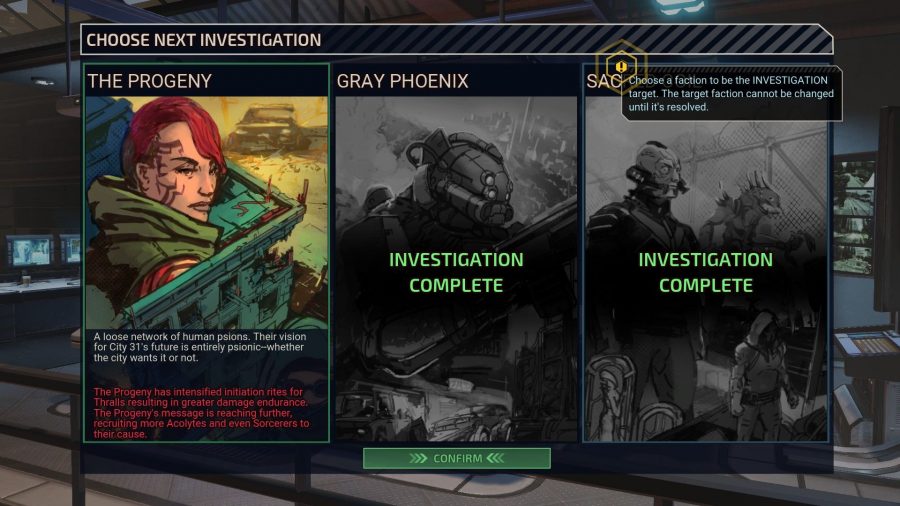 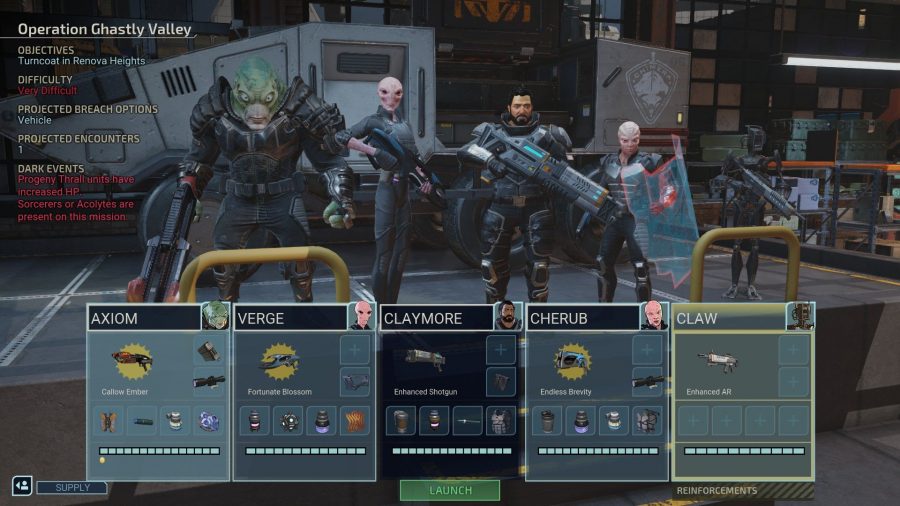 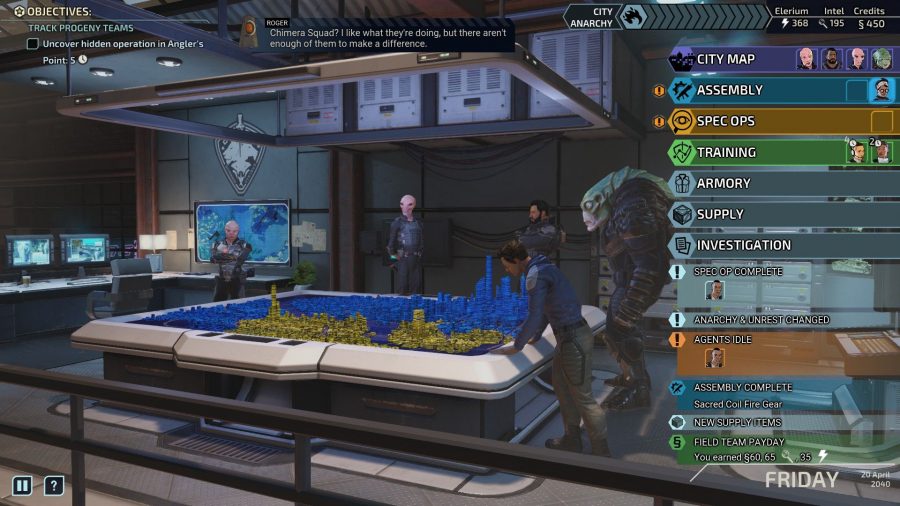 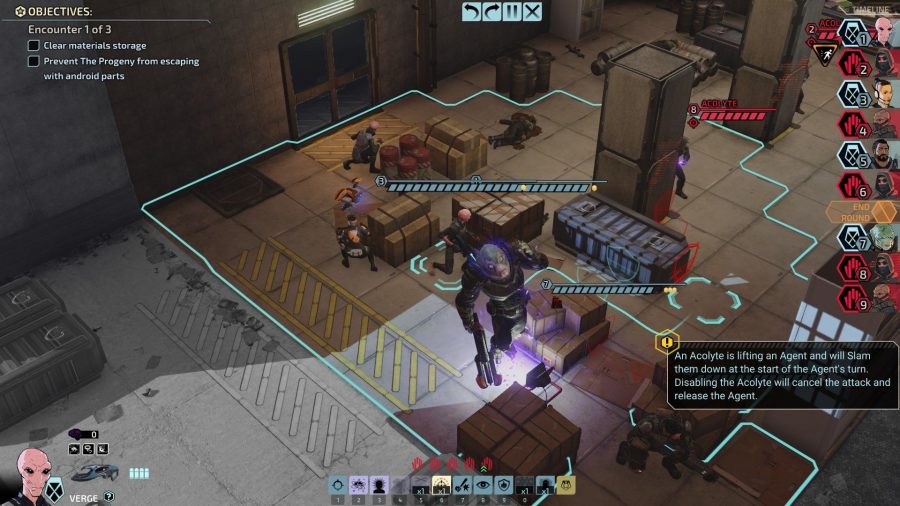 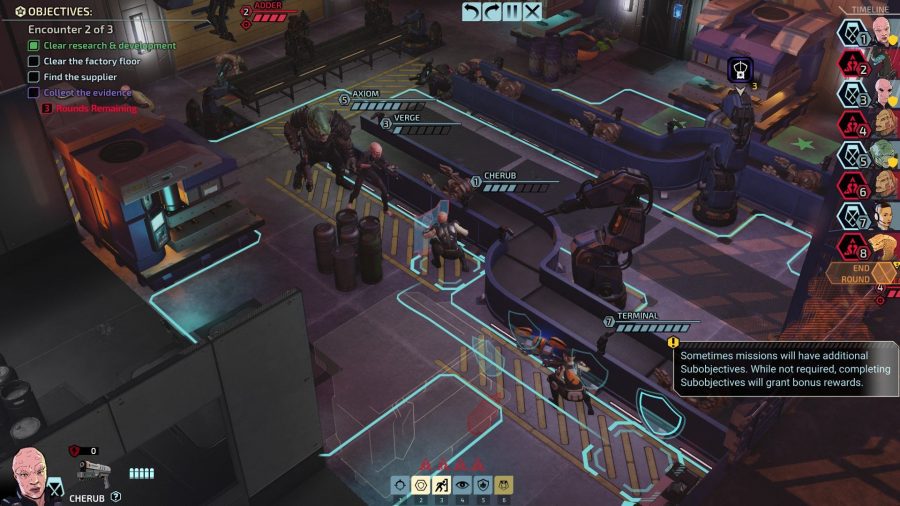 In closing it’s worth raising a few bugs. The game hung three times during my playthrough and the sound cut out once, forcing me to restart each time (fortunately there are autosaves at every round of combat – it’s like they know). More seriously, one of my best agents, the badass if tragically humourless Godmother, became bugged halfway through the game. I couldn’t send her on missions so relegated her to the Assembly (you can assign agents to base projects, rather than recruit scientists or engineers). It was either that or throw away several hours’ progress reloading the last save before the bug occurred. This was really, really annoying.

Still, Chimera Squad has been a lovely surprise – a fresh twist on XCOM that adds intimacy and excitement. It makes a lot of bold, clever changes to the formula established by its predecessors, all of which are executed well, and though they haven’t all been to my taste this deserves to be considered on its own terms as a spin-off.

I’m glad it exists. But it also makes me look forward to XCOM 3 even more.

Firaxis trades a global war for an urban mission to defend a multi-species peace. There's a lot to like in this more intimate, experimental spin-off, but the main sequence games are still the ones to beat.