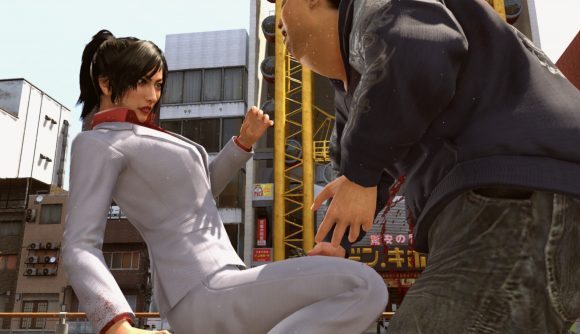 While Ichiban Kasuga is proving to be a worthy successor to the Yakuza series, Kazuma Kiryu casts a long, incredibly-cool-but-still-slightly-dopey shadow. If you want to add a little variety to your next playthrough of Yakuza Kiwami 2, one modder has the answer, and that answer is ‘turn Kiryu into a woman’.

Built by modder RyuHachii, the Genderbent Kiryu mod does exactly what the name implies – lets you play as a female Kiryu. The animations aren’t quite right in cutscenes, but otherwise it’s a pretty incredible addition. A variety of alternate outfits continue to be added regularly, so Kiryu is continuing to look stylish.

The mod initially released earlier this month, and RyuHachii told TheGamer that it was inspired both by fanart of a female Kiryu and the women who join your party in Yakuza: Like a Dragon. “If this mod or something similar gets Sega’s attention, it would be cool to have more diversity. A spin-off section where you play as a girl during the next games would be really cool.”

You can grab the mod for yourself over on Nexus Mods.

I added some more outfits to my Kiryu mod, check them out over here ✨https://t.co/U4cysOaw16 pic.twitter.com/yxxXAnPaEX