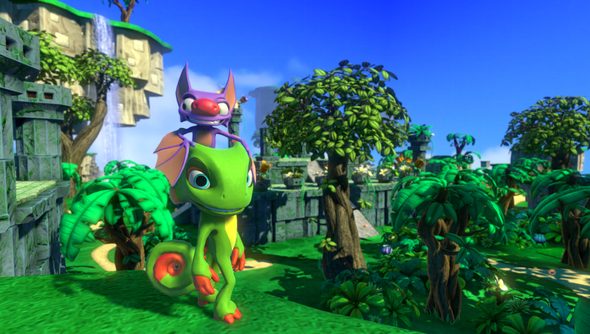 Earlier today, Playtonic, a new studio made up of ex-Rare developers, launched a Kickstarter campaign for Yooka-Laylee, a spiritual successor to Banjo-Kazooie.

Surprising nobody (apart from publishers who think that games like this aren’t wanted), the Kickstarter was fully funded in less than an hour.

Yooka-Laylee follows the 3D platforming adventures of the chameleon and bat duo, Yooka and Laylee. The duo have different skills that help them navigate the world and overcome obstacles, like Yooka’s flexible, sticky tongue and Laylee’s sonar blast.

“It was about recreating a team exactly how it used to be on the N64 and how it used to operate,” says creative lead Gavin Price in the Kickstarter video below. “Reproducing that environment, that team setup, that dynamic.”

Four stretch goals have already been hit, including unique boss battles on every level and transformations into “unexpected things” with unique abilities and controls. The next two stretch goals are for two-player local co-op and a 4-player versus mode, also local.

Grant Kirkhope, Banjo-Kazooie composer, has posted the first piece from the soundtrack, which you can have a listen to hear. Kirkhope neatly sums up how I’m sure the Playtonic team are feeling right now.

All those years telling people that this kind of game was wanted and being told that I was wrong …… fuck'em all!