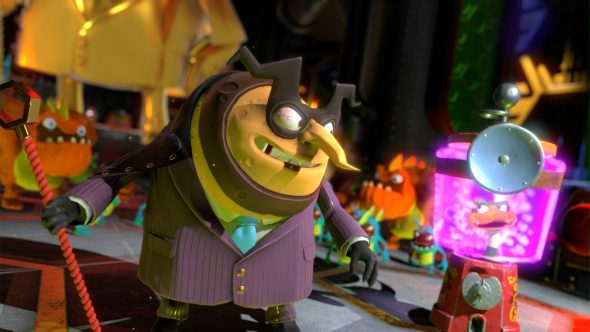 Of all the genres to come back with a vengeance in 2017, the smart money wasn’t exactly on the 3D platformer. While Nintendo never really stopped flying the flag for high budget jump-em-ups, when it comes to the rest of the gaming industry, the genre’s seen something of a dry spell. Take a quick look through Steam and the 3D platformers absence on PC is even more pronounced than on its console brethren. While the indie game revolution did see 2D side-scrollers like Fez, Super Meat Boy and even Inside jump and climb their way to the top of the Steam charts, PC players have mostly just had a few Sonic ports and Grow Home to feed their polygonal platforming lust.

Read more: the best Steam games you can play for free.

Yet now it seems as though the return of the 3D platformer is very much a real thing – and that’s largely thanks to a little game called Yooka-Laylee. In case you’ve been living under a floating power-up for the last few years, Yooka-Laylee started life as a Kickstarter project in 2015. Created by the remnants of Rare – the studio behind classic Nintendo platformers like Banjo-Kazooie and Donkey Kong Country – the team’s mission was simple: to make a modern platformer that captured that ‘90s console game charm. Unbelievably, this little Kickstarter that could quickly became the second most successful UK crowdfunding campaign of all time, raising over £1,000,000 in less than 24 hours.

Two years later and only a few short months away from launch, I sit down with a near-finished build of Yooka-Laylee to see whether it’s worth all of the fuss. 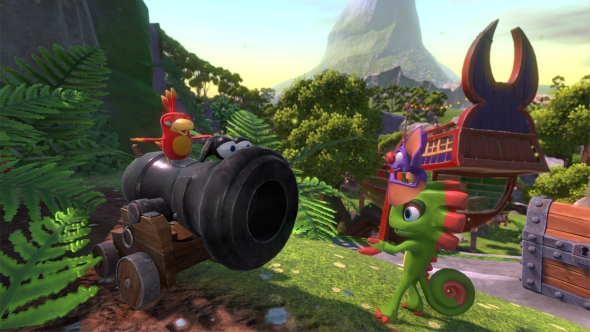 Unsurprisingly, the first thing that strikes me about Yooka-Laylee is just how crisp and brightly coloured everything is. With the game’s environments looking like an explosion of pastel colours that’s been populated with character models straight out of a ‘90s children’s cartoon, it’s a pretty warm and inviting world to find yourself exploring.

In typical console platformer fashion, the game starts with a silly cutscene setting up the basic plot.With the evil villain Capital B aiming to monopolize the book market by absorbing all the world’s books and selling them on, it falls to our pun-loving duo to track down all the pages and bring balance to the force. Er, I mean, stop the bad guy. Harking back to the 64-bit glory days, Yooka-Laylee sees you running around a hub world and collecting the remaining lost book pages, imaginatively named Pagies.

These googly-eyed Pagies are used as the game’s currency, both unlocking new moves and worlds for you to explore as well as allowing players to expand old worlds by ‘transforming’ them. With both protagonists dropped right into the game’s hub area, I’m tasked with unlocking the duo’s basic abilities in the time-honoured platformer way – by collecting the required amount of thingies. After running and jumping my way around the luscious green starting area, I soon spy a rather shifty-looking snake. As it turns out, his name is Trouzer (no prizes for getting that joke) and he promises to teach Yooka and Laylee how to fight if they bring him enough quills. 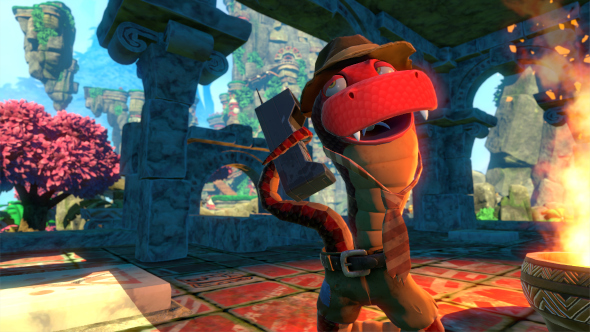 Even in this relatively small opening area there’s still a fair bit of exploration to be had. With various paths to explore, I scurry around the environment searching for quills while the developers perfectly set the tone for what’s to come. After handing in my recently collected nic-nacs, the next set of introductory quests has me running through precarious moving platforms; a cunningly disguised tutorial teaching players how to jump, crouch and fight.

While the platforming basics won’t exactly come as a shock to many PC-only gamers, the first time you stop to chat to an NPC might. In true ‘90s cuddly console platformer style, developers Playtonic have axed proper voice-acting in favour of gibberish grunts and noises. While this will probably administer a healthy dose of nostalgia for some, to the uninitiated, hearing torrents of nonsense will probably feel pretty grating. Luckily, the accompanying text is largely well-written, making it easy to focus on the script without completely driving yourself insane.

As you’d probably expect, the story isn’t really the main draw here. Surprisingly though, the game’s arbitrary conversations actually manage to be fairly entertaining. With dialogue that is unashamedly gamey, Playtonic have snuck in just enough meta jokes and clever wordplay to ensure that you’ll regularly find a stupid grin plastered on your face. It’s also worth noting that the constant punnery has been dialed back a whole lot since I last played Yooka-Laylee, with many of the early jokes feeling, mercifully, less forced. 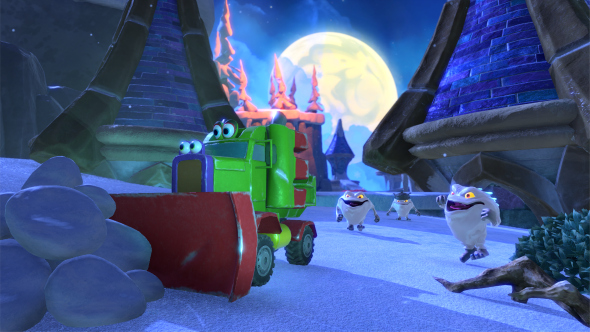 Thanks to its retro leanings, Yooka-Laylee can at times have a bit of an odd feel to it. While it stands toe to toe with triple-A releases visually, its simplistic and often inconsistent gameplay inspired by yesteryear makes it feel more reminiscent of an indie title. Where big budget console platformers like Super Mario 3D World or last year’s Ratchet and Clank remaster delivered platforming with razor-sharp precision and polish, Yooka-Laylee seems slightly more janky. Its camera controls felt weirdly stiff on an Xbox 360 controller, with the odd jump also feeling a bit floaty and imprecise. Yet weirdly, this all somehow adds to its retro charm.

Once I learn how to roll and have filled my Pagie collecting quota, I’m free to explore the first world in earnest. Interestingly, upon arriving in the grass-laden sandbox I realise that I’m free to approach each mini-quest in whatever order I see fit. After our shifty friend Trowzer offers to teach us even more new abilities in exchange for 30 quills, I gleefully embark on my icon-collecting extravaganza. As well as wanting to learn me some new abilities, helping out other NPCs also rewards me with precious Pagies. After Half an hour spent exploring the surprisingly populated little sandbox world, I’ve beaten a cloud in a checkpoint race, saved a skeleton from being cooked alive and managed to find enough quills that I could happily start a novelty writing business. Yet this is barely scratching the surface of what the game’s first world has to offer. 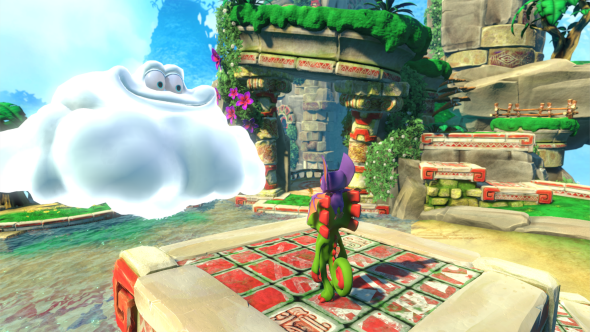 What feels refreshing about Yooka-Laylee is that you never feel like you’re under any particular pressure to complete too many tasks. While there are quite a wide range of NPCs patiently waiting for you in each world, how long you remain in each environment is entirely up to you. Once you’ve got the Pagies you need to progress, you can either use them to ‘transform’ the world and continue exploring, or choose to go back to the hub are and unlock a brand new sandbox to play in. It’s this sense of freedom that makes the game a joy to play, and one that permeates other aspects of Yooka-Laylee’s design. As well as simply choosing how long to spend in each mission, even the abilities you select have a big consequence on your progression – with each new skill you purchase allowing you to help previously uninterested NPCs.

Thanks to its heavily stylized approach, Yooka-Laylee definitely isn’t a game for everyone. While some may be put off by its cutesy visuals or cheesy dialogue, there will be thousands others who will love its open-ended approach to platforming. For many PC gamers the genre has become associated with speedruns, twitch-reflexes and frustration – but rarely this kind of simplistic fun. While this is undoubtedly a game made for consoles, it’s about time that PC owners got the chance to join in the fun. Like it or loathe it,there really is nothing else like Yooka-Laylee on Steam – and personally I can’t wait to play more of it.