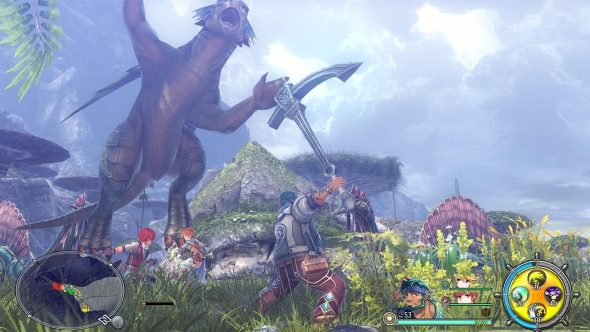 I must admit that I was quite looking forward to the PC release of YS VIII back in September, but things were clearly not meant to be for the classic hack n’ slash series. A mysterious last-minute delay was shortly followed up by an admission that the translation – despite having been released on consoles already – was not up to par, and that there were efforts being made to improve it.

The sheer scale of those efforts was made clear today, as NIS America’s latest development blog post mentions that they’re re-recording almost the entire english voice track for the game aside from a handful of incidental grunts and yells, all to match a heavily revised script, pushing the PC release back to next year.

Ah well, it’s not like we’re short on amazing RPGs to play on PC right now.

For those not keeping up with the series (and you should, they’re some of the best arcade action-rpgs ever made), Ys VIII’s initial translation was… wonky. Not only did they manage to render some lines almost incomprehensible during translation, but a few names and descriptions that were already in English even in the Japanese version got re-translated into word salad too. You can see a few examples of this over on this Imgur gallery here.

It’s a crying shame, considering the pedigree of the series. By most accounts, Ys VIII is one of the best in the long-running series, and a strong return to form for Adol Christin, one of the most straightforwardly heroic protagonists in videogames outside of Mario. Dark pasts, moral equivalency and shocking twists are for other heroes – Adol just turns up, befriends everyone worth a damn and goes off to slay whatever dark gods, dragons or other ancient evils have been bothering them.

While not quite as manically paced as earlier games in the series (the very earliest Ys games didn’t even have an attack button; Adol just charged into enemies, sword held forward), Lacrimosa of Dana slows the combat just enough to allow for some fun group mechanics, with a full party of adventurers chipping in on the action. It’s something I’m eager to try, once it arrives on PC, although there is now no word on a release date beyond ‘2018’.

Ys VIII is available to preorder for £45/$60 on Steam, although given the delays, it might be worth waiting and seeing whether the PC port is up to the same quality as the re-translation next year.