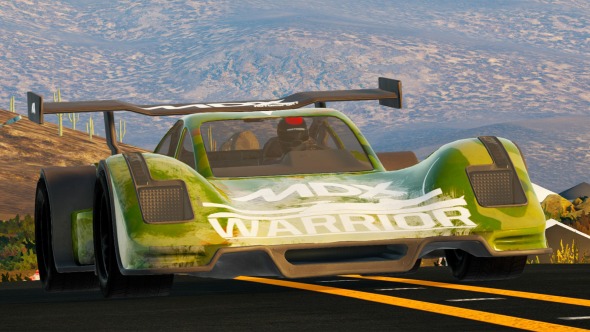 When we imagine near-future worlds in games we tend to focus on the military implications: the adaptive camouflage of Ghost Recon or the exoskeletons of Call of Duty: Advanced Warfare. Zerocar dares to dream differently, imagining a racing landscape dominated by electric-powered hypercars. After years spent mimicking contemporary racing at Codemasters, developer Jack Bognar is pushing Unreal Engine 4 into a realm of ever-so-slightly-impossible speeds. 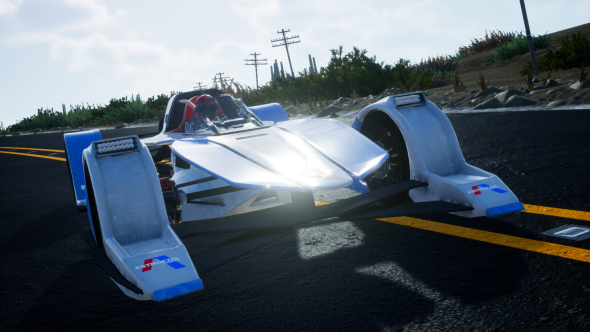 The year is 2036. Zero-emission cars that are so aerodynamic as to be practically flat top out at 500mph. And racing is, well, largely as it was. The hairpins are not quite as tight as they were, but drivers still pursue the apex on tracks in Switzerland, Utah, Austria, and the UK.

“The recognition [of tracks] is important,” Bognar tells us. “I wanted you to understand the sense of speed. You know what a real road is like and that it’s ten metres wide. I figured the realistic style would help you identify how fast you were going, because it can be quite difficult to get that in a crazy sci-fi look.”

Bognar wanted to avoid the abstraction of F-Zero or Wipeout, where tracks are, more often than not, floating high above brightly-coloured cityscapes.

“I don’t really get where I am,” Bognar says of those games. “I wanted to make a game that felt grounded, like you’re driving on a track that exists today and theoretically should exist 20 years from now.” 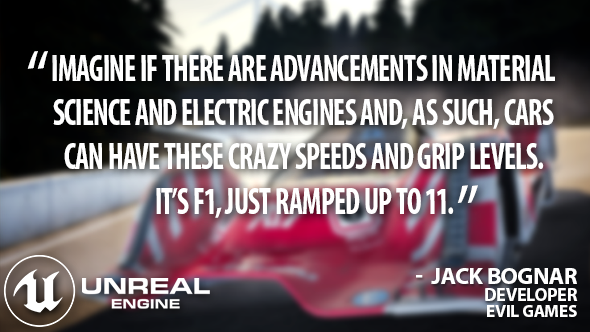 Before Zerocar, Bognar worked as a level designer at the legendary Codemasters Racing Studio. Although Codies’ driving games tend to stick rigidly to the here and now, inspiration struck while the studio were testing supercars destined for GRID 2 on the countryside courses of Dirt 3.

“You could drive a Lamborghini down a rally stage, and it felt really fast,” Bognar remembers. “I thought, this is great: a super-fast rally game. Imagine if there are advancements in material science and electric engines and, as such, cars can have these crazy speeds and grip levels. It’s F1, just ramped up to 11.”

There is another, more pragmatic reason for a setting that straddles the present and the future. Besides those he has purchased from the Unreal Engine 4 marketplace, Bognar is making all of the game’s art assets himself.

“It was a practical choice to explain away why the cars were so fast but also not have to come up with an insanely new art style,” he says. “It’s easier to put it in the near-future so I can make it look like stuff that exists today, but 10% more futuristic.” 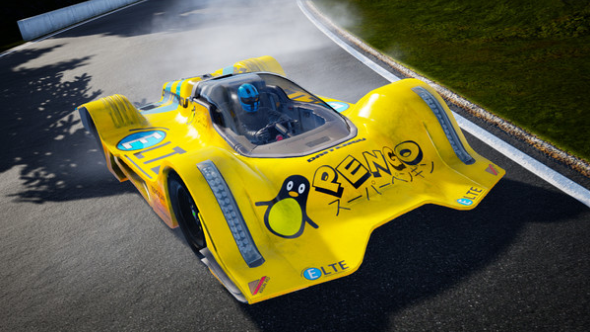 Viewed from the backwards, carbon dioxide-pumping perspective of 2018, the physics of zerocars are something of a mystery. But Bognar has been able to approximate futuristic drift and braking by fiddling with Unreal Engine 4’s built-in vehicle component, taking advantage of the source code access the engine offers.

“I started adapting it to my needs, ramping the speed up and messing around a bit,” he says. “I’ve added layers to the physics to make sure the cars don’t handle too terribly or slide across the road at super-high speeds.”

“It came with a lot of the stuff that I needed,” he says. “I’m not a physics programmer. I can get stuff done, but that’s largely because Unreal is user-friendly and good for designers.” 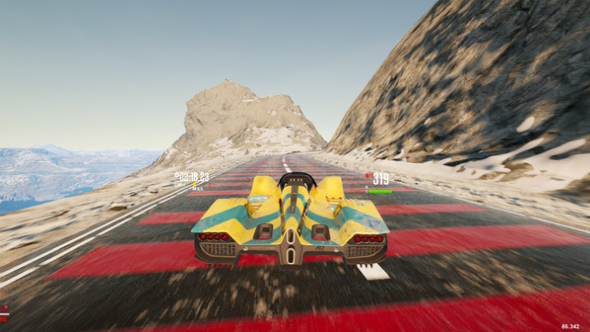 “Because the cars are so fast, the tracks need to be a huge length otherwise they’re over in 30 seconds,” Bognar explains.

“If I want to have 100-metre-long barriers, I can come up with a Blueprint that places them automatically,” he says. “That saves a lot of time.”

Bognar has pieced together point-to-point tracks that reflect his rally leanings, but are short on tight corners – providing few reasons to slow down. Zerocar’s courses are, by and large, flowing and gentle affairs built for drifting. As such, you can see the entirety of its longest track in ten minutes. You would be unlikely to guess that it is 64km long.

“That’s huge, but Unreal can deal with it,” Bognar says. “Nobody’s computer has died trying to play it.”