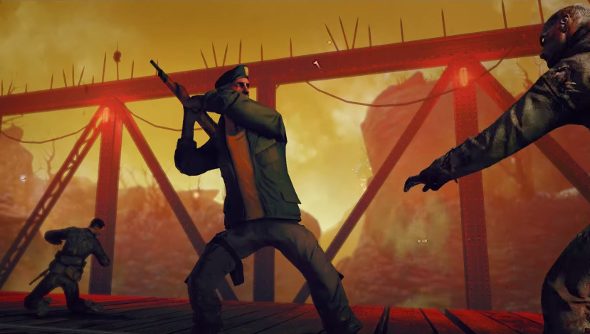 Rebellion and Valve have teamed up to combine zombies and time travel in a free update for Zombie Army Trilogy, and that’s a combo I can very much get behind.

The eight Left 4 Dead survivors from both of Valve’s zombie-slaying games are now playable characters’ in Rebellion’s undead trilogy.

Bill, Zoey, that guy and those other people have been zapped back in time to World War II, where they’ll be able to indulge both their love of history and love of zombie-murder. That bumps the roster of playable characters up to 16.

If you need a bit of context for the free update, there’s good news. Since Rebellion own 2000 AD, the home of square-jawed lawman Judge Dredd, they’ve put together a free comic explaining exactly how the cast of Left 4 Dead ended up mucking around in the ‘40s. You can get your hands on it here.

To celebrate the combining of the two franchises, Zombie Army Trilogy is on sale on Steam, knocked down by 66 percent, until Monday, August 24th.