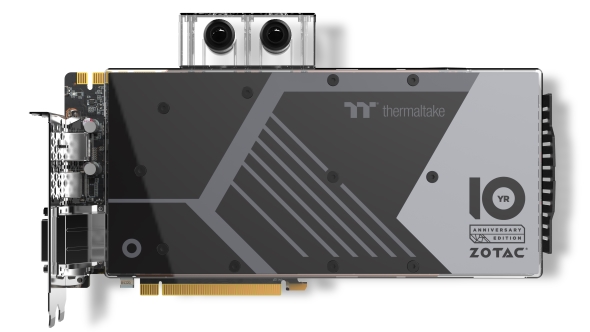 This year marks the company’s 10th anniversary so they’re pulling out all the stops for the Zotac GeForce GTX 1080 ArcticStorm Thermaltake 10 Year Anniversary Edition.

It’s a card designed for overclocking, but any ol’ GPU can have its clocks tweaked. Check out our guide on how to overclock.

The new card is both a pixel-pushing beast as well as a mouthful. The new card is sporting a tailor-made Thermaltake water-cooling block, designed to fit into a full liquid-chilling loop. Sprouting out of the top side of it are a pair of ¼-inch thread connections to connect into an existing loop.

It’s probably going to need some sort of bracketing system inside your machine too, because this dual-slot card is incredibly heavy. I almost broke my wrist picking it up to photograph. But then it does have a whole lot of graphics in there, though not quite as many graphics as the GTX Titan X or the upcoming GTX 1080 Ti. Still, all that GPU juice is always going to weigh it down.

The graphics silicon at its heart is a standard GTX 1080, but Zotac have added a dual-BIOS function to it. BIOS 1, the default setting, runs at 1,657MHz with a boost clock of 1,797MHz and the second is rated for 1,632MHz and 1,771MHz respectively. The reference GTX 1080, for comparison, is rated at 1,607MHz and 1,733MHz, so for all its bluster those are some pretty sedate speed bumps.

You can access the different BIOS chips either through Zotac’s Firestorm software or via a small hardware switch on the board itself. 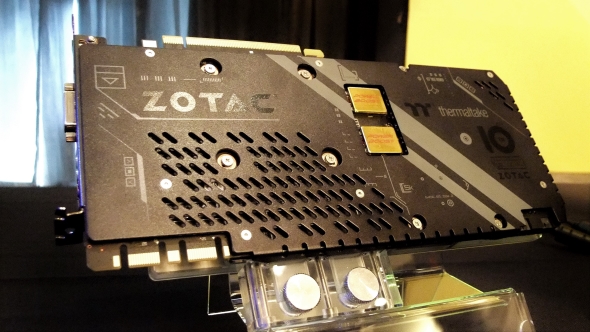 But with the extra power connections on the card you ought to be able to take Zotac’s 10 Year Anniversary Ed. even further. It’s rocking a 16+2 phase power array, with the twin 8-pin PCIe connections delivering 16 phases and a further two coming from the PCIe slot itself. The extra phases means it spreads the workload further than a standard card with the normal 8+2 phases, reducing the energy put through each phase and in turn dropping the operating temperature. It also means there’s more spare capacity to push extra energy through for more stable overclocking.

And with a dual BIOS setup you can keep a stable version on one side and keep another one just for messing around with a blue-screening like a champ.

Because it’s a special card, and it’s 2016, there are also a host of RGB LEDs crawling all over the Zotac GeForce GTX 1080 ArcticStorm Thermaltake 10 Year Anniversary Edition (thank the make for copy/paste…). It just wouldn’t do for it not to be able to match the rest of your rig’s colour scheme now would it?

And just to try and tempt you to buy a second one Zotac are also bundling their version of Nvidia’s SLI HB bridge, to help boost dual-GPU performance. We don’t have any official idea of pricing just yet, but given the Zotac GTX 1080 AMP! Extreme retails for around $750 (£590) it’s going to be an expensive bit of limited edition kit. 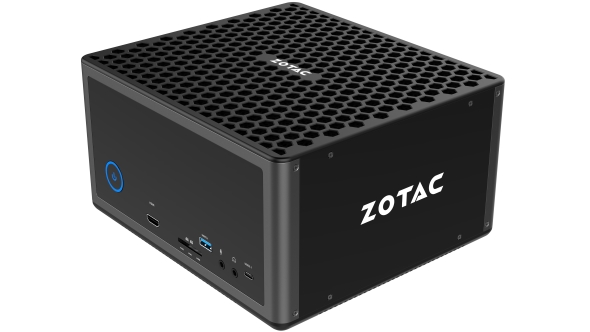 The verbose Zotac GeForce GTX 1080 ArcticStorm Thermaltake 10 Year Anniversary Edition isn’t the only GTX 1080 to get the Zotac liquid-chilling treatment though, they’re also putting one through a shrink ray and jamming it into their new mini gaming PC. The 10 Year Anniversary Edition MAGNUS EN1080 packs a desktop-class GTX 1080 together with an Intel Core i7 6700 CPU to create one powerful li’l machine. And to keep both those powerful components running in such a small chassis the whole thing is water-cooled too.

It might look particularly diddy in the picture, but don’t be fooled – this is no NUC-like mini rig. It’s full dimensions are 225 x 203 x 128mm, so while it is incredibly small for the powerful components inside, it’s no shrinking daffodil.