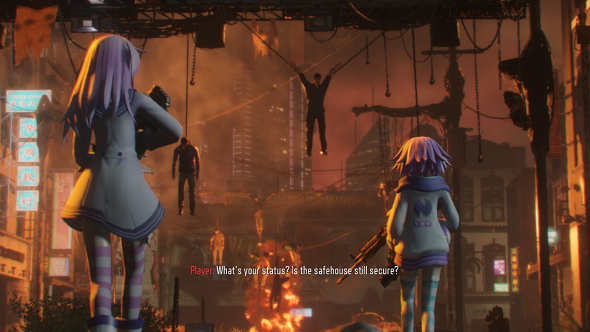 Some Call of Duty: Black Ops 3 fans have made some sweeping and, quite honestly, brilliant changes to the game’s campaign and Zombies modes. They have created a mod that replaces the main cast of hardened soldiers with JRPG girls.

Using models that have been borrowed from the PC version of 2017 JRPG Cyberdimension Neptunia: 4 Goddesses Online, the mod sees the gruff military hard men and women replaced with characters that fit neatly into the ‘moe’ sub-genre of anime heroes. Don’t worry: I can’t believe I’m writing this story either, but this is the internet and anything goes, apparently.

What other shooters would you like to see get the anime treatment? Here are our best FPS games.

The mod makes the integration of the colourful girls look surprisingly authentic and even lip-syncs them to the game’s dialogue. The voices have not been swapped though, which – and I think we can all agree on this – was the right choice to make.

This mod will certainly appeal to a niche audience but the sheer absurdity of seeing Neptunia’s characters dropped into the ultra-serious world of Call of Duty has a universal appeal. Bizarre projects like this prove that modding is a diverse scene that is far more than just adding higher-res textures to Oblivion.

The Call of Duty: Neptunia Ops III mod, which was picked up on by Kotaku, is available to download now from the Steam Workshop.

Unfortunately, the mod is limited to single-player modes only, due to limitations set by Treyarch. The developer seems unlikely to budge on this point as it would, without a doubt, break the immersion of its carefully crafted near-future sci-fi world, but don’t think that will stop fans from demanding to take their waifus online.

Is this the most ludicrous mod ever? It certainly gives these wacky Skyrim mods a run for their money.