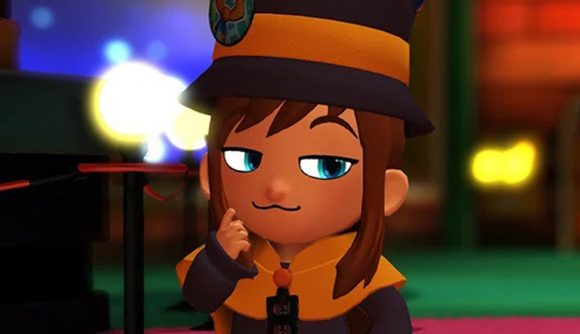 A Hat In Time released back in 2017 as an indie love-letter to N64/GameCube-era 3D platformers such as Super Mario Sunshine and Banjo-Kazooie, and is still one of the best platform games available on PC four years later. Now it’s looking like its developer is finally teasing A Hat In Time 2 for a reveal this Tuesday.

Apart from a few console re-releases, there hasn’t been a significant update for A Hat In Time since the game’s second major DLC expansion in 2019. It’s already had co-op and online play added, as well as support for PS5 and Xbox Series X.

So now developer Gears For Breakfast is teasing a big mysterious announcement for Tuesday, November 16 at 6 PM BST/10 AM PST/1 PM EST, which it will reveal on a Twitch stream – and many fans are hoping for a sequel announcement at last. The tease was accompanied by a parody of a famous Nintendo 64 ad showing the next level of games at the time, including Super Mario 64.

The ad includes at least one outfit – in the bottom right – that isn’t actually in A Hat In Time, although modders quickly added it. It’s possible it could be for a new expansion or a full next-gen update, although it’s not really a game that would benefit from such a graphical update. A sequel certainly seems the most logical for this level of teasing – the GameCube-like console, incidentally, is one from the game.

We’ll find out on Tuesday, but even if it is A Hat In Time 2 it probably won’t be released this year – which means Psychonauts 2 is still the best 3D platformer out this year and that has an official mod for A Hat In Time if you want to try that out.