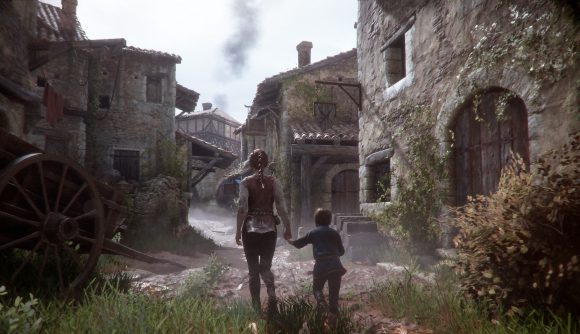 With A Plague Tale: Innocence now released, and a challenging, point-and-click-style escape from the fearsome Inquisition upon us, it’s time to check out the critics’ scores to see if the game’s striking graphics and compelling narrative are matched in quality by its gameplay.

If you’ve been drawn in so far by the allure of an immersive, story-rich, third-person adventure you’re in luck. In our own A Plague Tale review, we hailed the game’s “wonderful story that’s told well, with the central, twisting mystery behind the weird behaviour of the rats, the spreading illness, and the motivations of the Inquisition keeping a tight grip on the narrative for the ten-hour duration”. Redolent of other recent revisionings of the point-and-click adventure genre, such as Life is Strange and The Walking Dead, it offers an authentic and natural interplay between its youthful protagonists, and some great puzzle mechanics to boot.

However, as our review highlights, some of Asobo studio’s ambitions don’t work quite as well in practice. We felt that there was an excessive volume of gameplay mechanics, introduced right up to the game’s end, and sometimes only required a handful of times. Furthermore, the plot has some ‘fantastical’ elements later on, which could put players wrapped up in the game’s historical leaning off.

Overall, we feel that the game offers something daring, reinventive, and downright heart-wrenching at times, which is pretty special – and it looks like many other critics agree.

Read more: A Plague Tale: Innocence explores the wrath of the French Revolution

Metacritic has scored it an 82, with Opencritic similarly coming in at 81. Check out our roundup of the critics for yourself below.

It looks as though the reviews are mostly positive across the board, and if you are happy to perhaps compromise on tighter gameplay mechanics in return for a truly rich and harrowing adventure game, this might just be the plague for you.