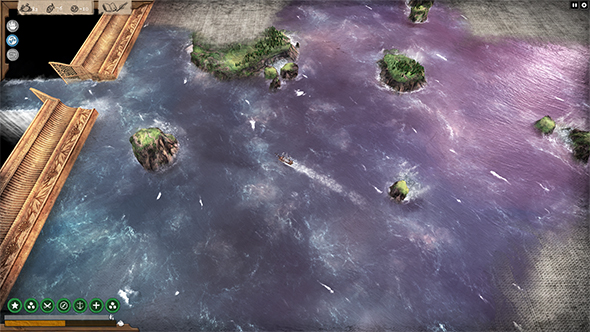 Abandon Ship, an FTL-like strategy RPG all about sailing the high seas, is shaping up very nicely. We’ve gotten a look at combat against pirates and sea monsters in previous trailers, but now it’s time to look at exploration. By which I of course mean having dope naval battles amid volcanic eruptions.

Stay current with the best indie games on PC.

Exploration mode is how you’ll progress the game, sailing to find new events and new ports. Each area is surrounded by a massive picture frame, with gates to new locations opened by completing events. Though the main story will push you toward particular locations, you’re otherwise free to explore however you want, and there are loads of unique missions tied to totally optional areas.

The trailer shows off a massive frozen kraken and what appears to be a giant mass of spider webs as potential locations to explore, and conditions around the isles affect how combat nearby works. Storms will have obvious effects, and you can even end up in battles near active volcanoes, where lava will rain down alongside cannon fire.

Things aren’t over when your ship goes down, either, since stranded crew members will band together on lifeboats and bits of debris in hopes of meeting rescue before resources run out. As long as the captain survives, there’s a hope of victory.

It’s all looking like a great time, one more than worthy of its self-described FTL influences. Abandon Ship is due out sometime this year.