Acer’s Predator 21 X is mad. Only 300 of the enormous, curved-screen laptops have been made, with each recipient being charged $9,000. But Acer reckons they’ve distilled its luxurious essense down into their new Triton 700 laptop – though at $3,000 it’s still not exactly cheap.

You don’t want to game on a mousepad, do you? Check out our guide to the best gaming mice to find the rodent that best compliments your laptop.

It’s a huge child’s toy and a triumph of engineering, but one which is sadly out of reach for most of us. Even if you had the money lying around, Acer have limited production to a run of 300. So what do the rest of us do?

At an Acer press event yesterday I asked Acer product specialist, Gabor Szabad, why the company hasn’t opted to build more than 300, given the hype about the laptop. “I don’t want to say anything off the top of my head… I think it’s the exclusivity,” he said, “but that’s why we’ve got the Triton 700. It’s got the mechanical keyboard, the AeroBlade fans… In fact, let me show you…”

It wasn’t just Szabad who’s made the link between the 21 X and the Triton 700, though. Acer’s Jerry Hou said much the same at their [email protected] conference in New York: 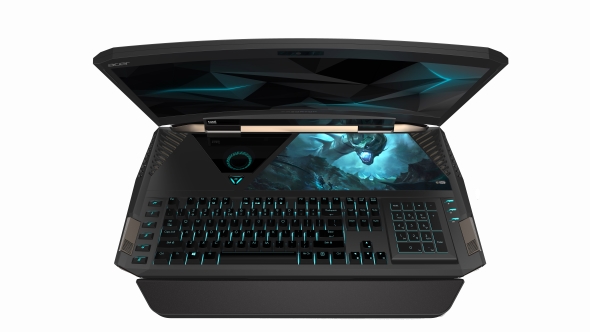 So, it’s looking like the Triton 700 will be a toned-down, less gratuitous take on Acer’s flagship laptop. This means the monstrous $8999 price tag will deflate to a still hefty, but more palatable, $2999 for the low-end version. This is partially down to a lack of the aforementioned exclusivity, but also to some choice feature cuts here and there.

The most obvious of those being the removal of one graphics card and the use of a 15.6” flat 1920 x 1080 IPS display instead of the 21” curved widescreen. In all honesty, though, at 21” a curved screen isn’t broad enough to create that important wraparound sense of immersion and justify the price tag. At $2999 you’d think 1440p or 4K enabled screens wouldn’t be an entirely unreasonable thing to expect.

In place of the flippable numpad/trackpad on the 21 X we have a bizarre trackpad that sits above the keyboard to bring the keys closer to the user. We’re waiting until we get an extended look at the Triton to see if the horror stories about using this setup are true, but as Szabad puts it, “you’ll be gaming with a mouse, right?”

What does the Triton 700 have though? Well, it can include up to an Intel Core i7-7700HQ processor, Nvidia GTX 1080 Max-Q graphics, two NVMe PCIe SSDs that can add up to 512GB of storage, up to 32GB of DDR4 RAM, Thunderbolt 3 connections, a mechanical keyboard, PredatorSense overclocking software and Nvidia G-Sync support. 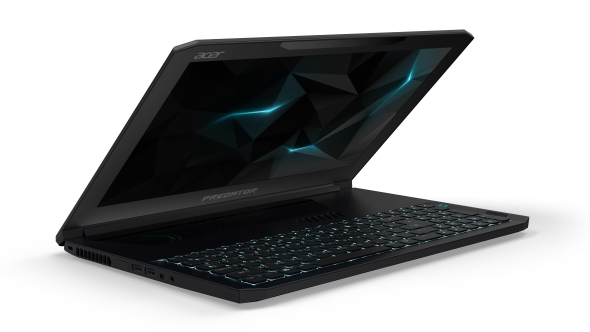 The much-vaunted AeroBlade 3D fan will be making an appearance too – it’s essentially metal fans with added 3D fins to create extra airflow. You’ll be able to see this fan and the five heat pipes through a Gorilla Glass window built into the top plate. Tasty.

All this tech, and they’ve still managed to bring the Triton 700 down to 18.9mm and 2.6kg (5.7 pounds). That means you get a laptop you can actually movewithout resigning yourself to a throttled gaming experience. This is thanks to Nvidia’s new Max-Q design for their mobile graphics cards. Redesigned versions of the GTX 1060, 1070, and 1080 which operate at a lower power (with a small performance drop), pump out less heat, and therefore require less cooling fans and space to keep them operating effectively. It looks like the age of thin powerhouse laptops is here…

Acer say the Triton 700 is coming in August. Reckon it’ll satisfy your Predator 21 X fantasies at a third of the price?