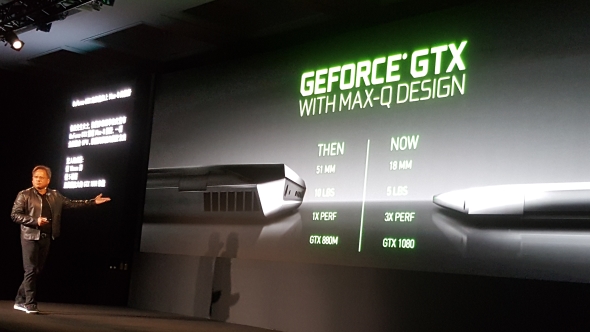 Nvidia have just held the opening keynote of this year’s Computex show, unveiling a new gaming laptop initiative they’re calling Max-Q. Working with partners, like Asus, they’re helping create designs which are the one third the thickness of previous generations of high-powered gaming notebooks, but with three times the performance.

You might get a screen built into your laptop, but for your desktop you’re going to need one of the best gaming monitors around.

Following hot on the heels of their new Battlebox lines – for the first time offering AMD Ryzen CPUs as part of the high-performance package – the new GeForce GTX Max-Q Design laptops follow a similar line for the laptop side of the gaming business.

The difference with the Max-Q Design though is that, instead of making specific component demands as they do for the desktop machines, they’re specifying the actual physical design of the Max-Q notebooks. They’re not necessarily looking for laptops which are 15mm thick, 5lbs in weight, with a GTX 1080 GPU at their hearts to carry the Max-Q branding, but are instead focusing more on the actual acoustic design.

The requirements for Max-Q means a laptop needs to be able to top out at 40dB even when it’s plugged into the wall running the GPU at full speed. The Max-Q Design branding will cover the top three Pascal laptop GPUs – the GTX 1060, GTX 1070 and GTX 1080. 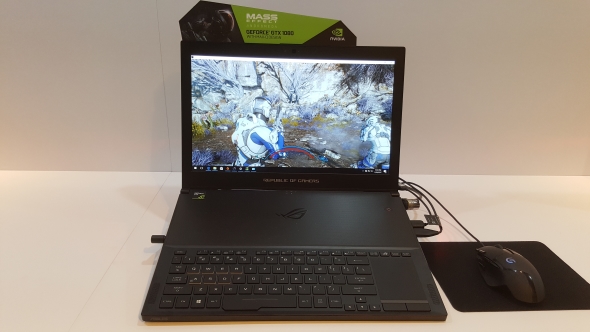 The new Asus ROG Zephyrus laptop, rocks the top GPU in a sub-18mm chassis. Comparable machines on sale now are around 41mm thick by comparison.

To be fair, slimline gaming noteboooks are already available; I’m writing this out on a ~15mm Chillblast machine, using an MSI chassis, which houses a GTX 1060 GPU. But the point is that with a Max-Q sticker on the front it makes it simpler for the average gamer to know which machine they really ought to be coveting.

It looks like Nvidia are trying to create a Centrino-like brand for gaming notebooks. 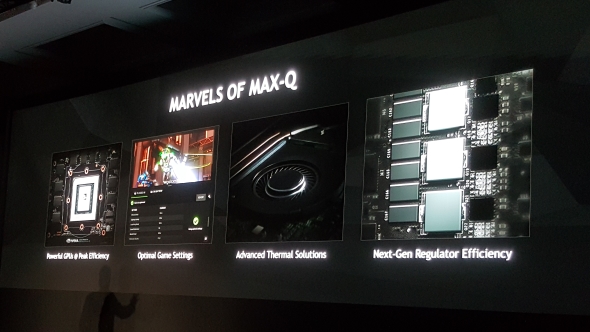 The Max-Q name comes from NASA and the design ethos behind creating space craft. It’s the point where the aerodynamic stress on a craft is at its maximum. Nvidia have taken this to heart for their GPUs where the maximum stress comes from gaming within the thermal and energy constraints of laptops.

For Nvidia then Max-Q means the desire to maximise the performance of the machine at the maximum efficiency point. To do that they’re built on four pillars of design.The first is tuning the GeForce GPU for efficiency itself, the next is to optimise game settings via GeForce Experience, and then it’s a case of “sparing no expense,” as Nvidia CEO Jen-Hsun Huang explained, on both the laptop’s thermal design and its low-voltage regulators.

Huang introduced the new, slimline Asus Republic of Gamers laptop using the Max-Q Design ethos on stage at the Computex event, showing it running Project Cars 2 on battery at “60% more performance than the PlayStation 4 Pro…and it comes with a TV too,” said Huang.

The comparison with the Sony games console is no offhand remark as he also pointed out the sales of GeForce gaming notebooks last year topped 10 million, around the same level as a current-gen games console. “The only difference is the PC market is growing much faster.”

The GTX Max-Q lineup will go on sale on June 27 this year with eight of the top partners, from Asus, Gigabyte, MSI and Acer, having Max-Q branded machines set to drop at the same time.