Acer have gone deep on their gaming gear at this year’s IFA show in Berlin. They’ve been showing off gaming mice, headsets, that hoary ol’ delayed G-Sync HDR screen, and an 18-core PC, with four GPUs, two carry-grips, and carbon fibre patterned wheels. Yeah, wheels. And they’re calling that a gaming PC.

We love a GPU here at PCGamesN, so check out our pick of the best graphics cards around today.

The Predator Orion 9000 is Acer showing off with a machine that’s got the biggest numbers they can find to jam into a PC. Then, because gaming is the only real growth market in the PC world, they’re trying to make out that it’s a rig designed for gaming.

“The Predator Orion 9000 is the most powerful PC we’ve ever made,” Acer’s Jeff Lee says. “With four-way graphics and 18-core processors, it is a platform that takes gamers and intense graphic users beyond their dreams.”

Despite his title being GM of stationary computing, Lee’s team have still seen fit to give the Predator Orion 9000 wheels so you can ride it around the office when it’s not plugged in.

It’s an ambitious machine, not least because the 18-core Intel Core i9 has yet to be seen out in the wild and is likely to be in incredibly limited supply. But maybe not as limited as the AMD Vega GPUs Acer are hoping to fill out the four-way graphics array with. The instant they drop that fourth AMD RX Vega 64 graphics card into an Orion 9000 they’ll likely vanish in a puff of logic. Nature abhors a vacuum almost as much as it seems to abhor more than three Vega cards occupying the same physical space, such is their rarity.

As one of AMD’s major OEMs, however, they will get preference over the channel when it comes to GPU stock, so the Orion 9000 PC may end up with the delayed tech while they’re still unavailable in the shops. Now, why does that seem familiar?

But what’s four Vega cards really going to get you? According to Acer it will mean the Orion 9000 can deliver near-photorealistic imagery. Personally, I greatly doubt four Vega 64 cards will do much more than a pair of them when it comes to gaming. That is just based on legacy multi-GPU experiences and a lingering distrust of CrossFire as I haven’t had a chance to use four cards at once myself… see above. 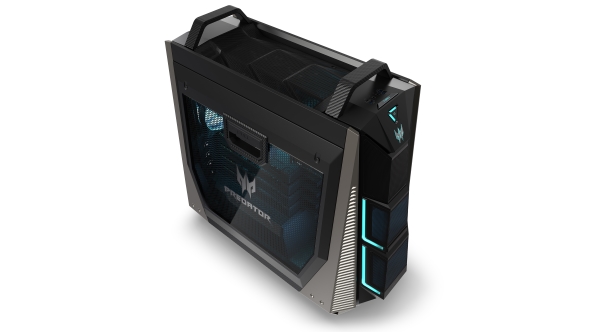 They will also stock the new Predators with a pair of Nvidia GTX 1080 Ti cards if you’re more green-tinged at heart than red, though due to Alienware’s exclusivity deal there’s no Threadripper for Acer.

Acer are also proud that the Orion 9000 “raises the bar with the capability to support up to four Radeon RX Vega cards.” So they’ve ‘raised the bar’ by using a motherboard with four PCIe slots and a beefy PSU – impressive stuff.

All that and it’s only going to cost $1,999. Honestly, that’s an incredible bargain. One dollar cheaper than buying the 18-core Intel Core i9 7980XE on its own… ah, hold on, ‘prices starting at…’

Essentially, Acer are trying to show off that PCs in general are capable of being incredibly powerful if you’re prepared to pay for the privilege. It is, however, great to see the likes of Acer at IFA and HP at Gamescombeing serious about PC gaming, especially on the desktop. Though the Acer hyperbole is a bit much when they’re just taking off-the-shelf components and building around them.

All they’ve actually made themselves, then, are the Orion 9000 chassis and the IceTunnel 2.0 airflow management inside. I mean, it’s sort of pretty in a weird, angular way, but I gotta say, I do still much prefer a more sedate Corsair case.