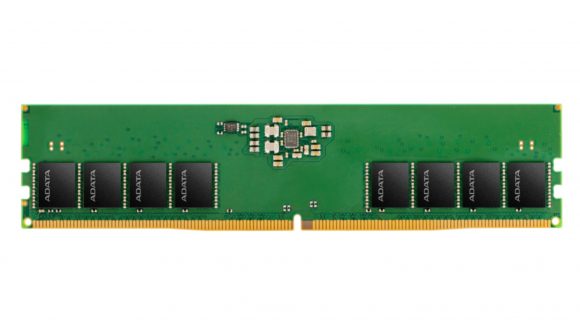 We previously heard that memory manufacturer TeamGroup is drawing up plans to release its consumer DDR5 modules later this year, and it won’t be alone. ADATA has revealed in a press release that its next generation memory modules are in development too, with speeds of up to 8,400MT/s – the highest we saw on DDR4 was 5,000MT/s. Like all DDR5 RAM, it runs at a lower 1.1V for reduced power consumption compared to the 1.2V of the previous generation, and has ECC built onto the die for improved stability.

ADATA plans to release its DDR5 RAM modules in capacities of up to 64GB, and it’s working alongside the manufacturers of some of the best gaming motherboards, like MSI and Gigabyte, to ensure there are DDR5-compliant motherboards available to coincide with the release of the new standard.

Even if you could get your hands on a DDR5 module and motherboard tomorrow, you’d have nowhere to stick it – neither of the current best gaming CPUs support DDR5, and Intel’s imminent Rocket Lake-S chips won’t either as they’re staying on the same LGA 1151 socket for backwards compatibility. Sadly, this means DDR5 support is even further out of reach, hinging on future generation processors.

We’ll have to wait for Intel’s 12th generation Alder Lake-S based on an LGA 1700 socket, coming either late this year or in 2021, or AMD’s Zen 4 CPUs in 2022. The motherboards for these chips will undoubtedly be DDR5 compliant.

RAM may not be the most exciting topic, but the ever-closer launch of DDR5 is a welcome one, bringing improved performance and stability, higher capacities for even more RAM, and lower power consumption.