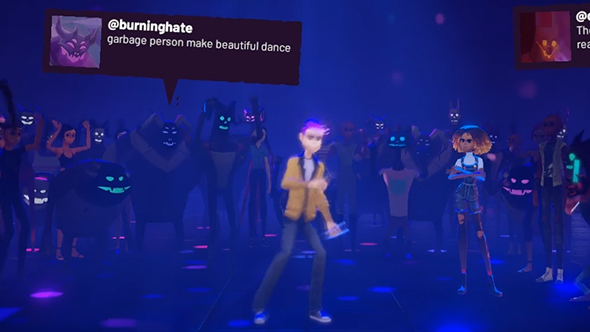 Update, March 21, 2018: The first gameplay trailer for Afterparty is here.

Afterparty – the adventure game about escaping hell by outdrinking Satan – is still a way off from its 2019 release date, but developers Night School Studio have finally given us a slightly more vibrant look at what to expect from the game, including our first look at the game itself with a new teaser trailer.

It bears a lot of visual similarities to their previous title, Oxenfree, with a 2D side-scrolling perspective and similar character designs. The difference is that this one’s set in a neon-soaked underworld, so things are a bit grimier and more purple here. Afterparty also seems to feature the same real-time dialogue system, letting you choose responses without interrupting the flow of conversation. There’s a lot more texting, including demon texting, which is sure to be a trip.

The trailer also reveals the voices for the two lead characters. Lola will be portrayed by Janina Gavankar, who you may recognize as the lead of the Star Wars Battlefront II story campaign, or for her role in the bizarre live-action trailer for Hearthstone’s Kobolds & Catacombs. Milo is voiced by Khoi Dao, who’s appeared in a number of anime and videogame roles.

Original story, December 14, 2017:Oxenfreewas an absurdly nifty take on the classic adventure game formula that took teen drama, snappy dialog, and paranormal shenanigans, and threw it all into a stylish blender. Developers Night School Studio have something equally inventive in store for their follow-up: Afterparty is a colorful adventure about college kids getting drunk in capital-H Hell.

As the developers tell IGN, the game starts when best buds Lola and Milo suddenly die together and find themselves stuck in an eternal line to Hell, confused about what they did to deserve a place in the underworld. So they do the only thing they can in the situation – go a massive Hell-bound pub crawl with the goal of eventually beating Satan in a drinking contest and earning their way out. 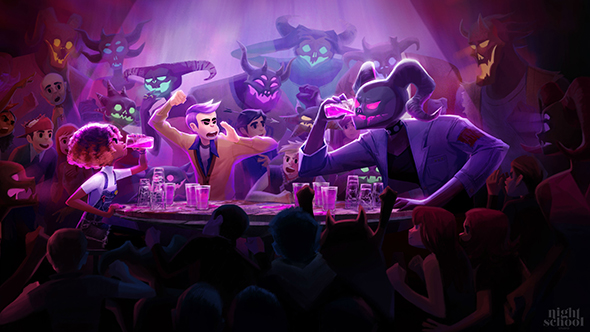 That means wandering through the streets of Hell through neighborhoods inspired by various religions, seeking out bars to build up your drinking prowess. This is all traditional adventure game stuff, where you chat up demonic barflies, do karaoke, engage in beer pong, all that good stuff. There’s an equal focus on dialog and drinking, with different types of drinks offering things like improved wit or the liquid courage to chat up a particular character.

It’s early yet, so we’re still just looking at conceptual art and gameplay ideas – but those ideas are some of the more inventive adventure game concepts I’ve heard in awhile, and that art presents one of the most colorful looks at Hell I could imagine.