For those whose eyes have already turned to the promise of Age of Empires IV, the remastered version of the most divisive of the original games is unlikely to be marked in their calendars. But Age of Empires III: Definitive Edition is nearly here, and, well. It does the job.

I can’t stress enough how excited I was when I got the code to play this game. I’ll even admit to squealing a bit when the song started (doo-DOO, doo-doo-doo-doooo). And once the feeling of nostalgia from the introduction fades, we get a nice little gift: a note admitting that the representation of the indigineous civilisations and American history had taken “some liberties” in the game’s original 2005 release. Developer Forgotten Empires goes on to promise that it has corrected these errors by working closely with native American tribes. There’s no explicit apology, but it’s a welcome recognition of the mess made of native tribes in the original’s War Chiefs expansion.

In the main menu, I am presented with the choice of choosing to stick with the classic UI from the previous games or a cleaner, more modern version.

Regardless of your choice, the menu has a couple of new options. The Art of War mode returns from Age of Empires II’s definitive edition and, through a series of enjoyable challenges, helps teach new players the basics of RTS games and of Age III specifically. It’s also handy for more experienced players to get a grounding in advanced techniques and prepare for multiplayer, if it’s been a while. Art of War was well-received the first time around, so its return is welcome. 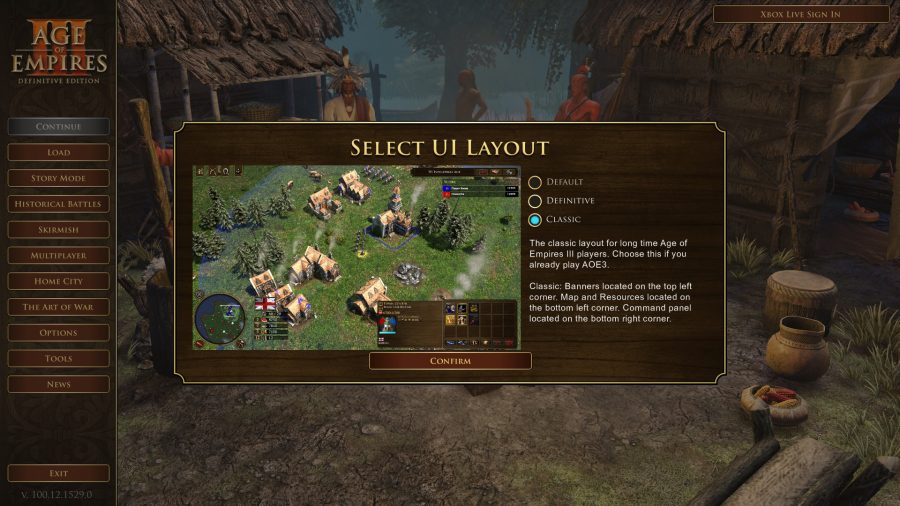 Also returning – and here’s what got me really excited – is the Historical Battles mode. Not much mystery with a title like that, but it’s hella fun to play, and should help satisfy those who never liked the fictional history approach the original game took with its campaign. A little text preview, with voice acting, helps to set the mood and historical context before each scenario itself unfolds. Trying to recreate famous victories from centuries ago is hard, though, and actually winning some of these battles is quite challenging even on moderate difficulty. Or maybe I’m just out of practice…

To summarise: Llamas. All. The. Llamas.

As a historian, I really appreciate the care the developers take in choosing battles from the specified time period and trying to incorporate as many nations as they could. The maps are well-made and offer plenty of potential for play: there’s a broad range of main and side objectives, which makes each so-called ‘battle’ way more engaging than the straightforward skirmish one might assume. History nerds will further appreciate that, after each scenario ends, the narrator will tell you a little bit more about the events in which you just participated and the real outcome for everyone involved. It’s a nice touch that makes me more excited to try the others.

Age of Empires III: Definitive Edition adds two new nations: Sweden and the Inca. The Swedes’ unique features focus on what makes Age III so different from Ages I and II, such as gunpowder and mercenary units, and are easy to appreciate aesthetically with a beautiful home city and neat touches in their unique units, such as Finnish riders. I’m sure Swedish players will also welcome their inclusion in the series for the first time. Fundamentally however, they feel less distinctive than the Inca, who were really fun to play. To summarise them in one word: Llamas. All. The. Llamas. You get a lot of free llamas, and with them a lot of food, which gives a major boost to your early economy. Aesthetically, their units and especially their buildings are packed with detail – they look appropriately unique even among the game’s other native civilisations and you can tell there was real research involved. 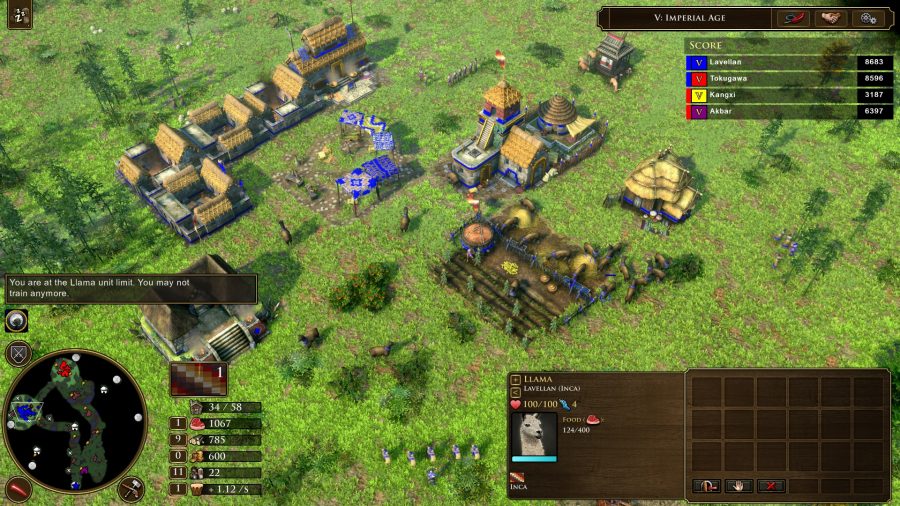 Given the original’s 3D engine, the process of remastering Age III’s graphics would’ve been fundamentally different than for the first two games. I’ll admit I was reticent about this, but I actually really like the results and I think they stand tall among recent RTS releases. The units have a depth of detail to them that allows you to discern separate layers of clothing, and you can even see soldiers’ faces – they don’t have much in the way of actual expressions, but they do have eyes! The buildings for every nation are now more historically authentic than before, and home cities look even better. All this being said, I found I couldn’t appreciate the remastered units as much as I’d have liked due to the limited zoom. You can see they look pretty, but they’re pretty enough to warrant an even closer examination than the game allows.

PSA: AoEIII: DE is coming to Game Pass for PC!

I truly wish I could say similarly positive things about the animations. The CG cutscenes look great, but when it comes to unit animations during in-engine scenes or battles, I was rather disappointed. I know that detailed cinematography is unlikely to have been a priority, but I did hope to see more natural movements from individual units instead of a stiffly gesticulating Morgan Black. It’s not that they look bad, and we didn’t get any big promises about cutscene overhauls like the ones Blizzard made ahead of Warcraft III: Reforged, but there appears to have been no little to no improvement over the original game in this area, and the better graphics just make this more noticeable. 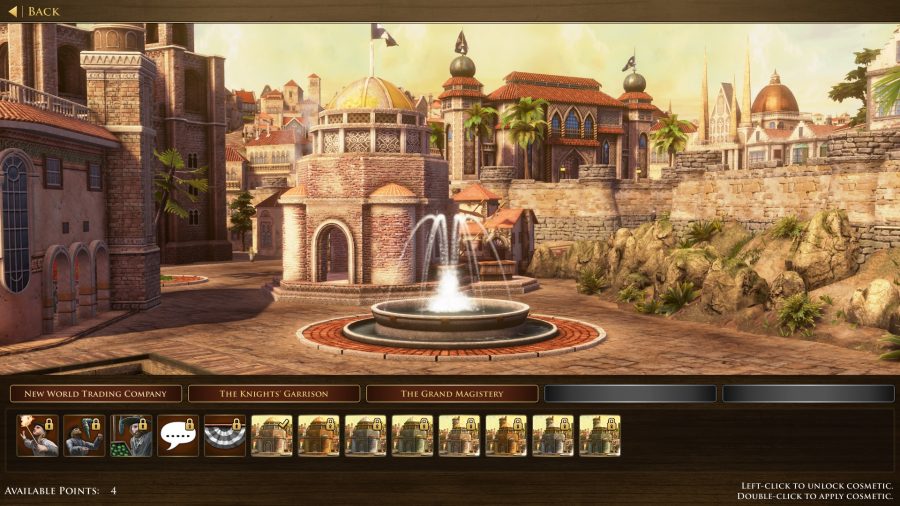 Regarding gameplay, the devs have incorporated many of the balancing tweaks made by the community over the years, which should bring many more units and civs into the multiplayer meta. But elsewhere, I couldn’t really see that many changes. The AI continues to be a bit of a mess; for example, unless you keep ordering your units to attack who you want them to, results are slow in coming. The soldiers in the front will continue to attack if there are enemies in sight, but the ones further back will just stand still – even if they’re in attack mode. Since there are options for more defensive and offensive formations, one would expect them to be more meaningful, but alas, they are not. A mixed command group will also still move at the speed of its slowest member – there’s no rushing these guys.

Civilian AI seems to have improved a bit more. Gatherers will now move further from your base to find trees to chop and animals to hunt. Certain quality-of-life changes made in previous definitive editions have also made the cut for Age III, such as the selection filter that allows you to select only your military units and ignore any civilians that are working among them, which I think is one of the best additions to the game. It may sound silly, but if you’ve been playing Age III for a while, you’ll know just how annoying it was to select your army to defend a mill or mine, only to have to reassign all your peasants again.

One of the most distinctive and best-loved features of Age of Empires III was its home cities mechanic, in which you upgrading your civilisation’s capital city unlocks new shipments – containing units, resources, and other gooides – that you can send to yourself in-game. I’m a passionate defender of getting as many details accurate as possible in historical games, and having a new colony receive supplies from its metropole was always an inspired idea that somehow remains little-imitated. 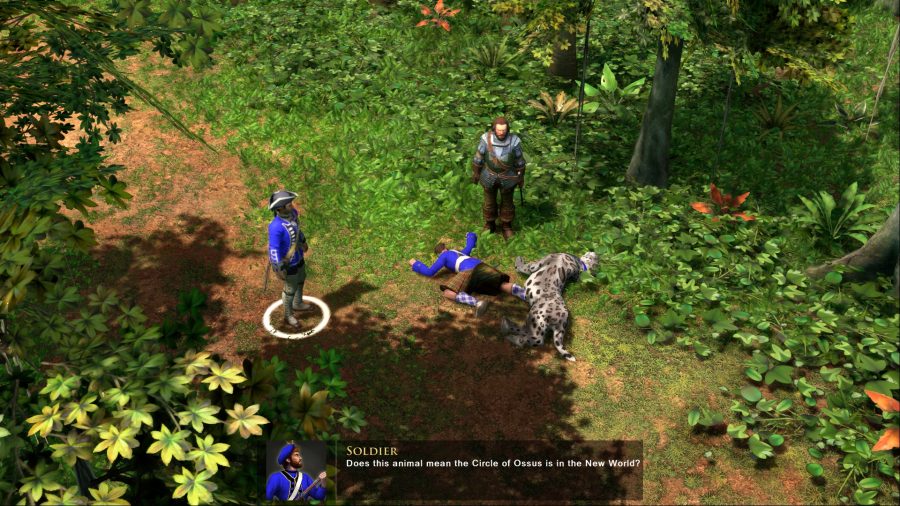 The original game already allowed us to customise these home cities, adding people, vendors, and banners, but the process is even more enjoyable with these updated graphics and I’ll admit to spending more than a few minutes just admiring the city that I helped build. Unfortunately, none of the nations that were part of the expansions, nor the ones added in the definitive edition, can customise their home cities in this way, which does take something away from playing as them.

Overall, though, I like Age of Empires III: Definitive Edition, and I think it does tick the boxes it wanted to tick. It’s a more polished and complete version of Age III, with a better user interface, more to see and do in the main menu, two new civs, and some quality-of-life tweaks to grease the wheels of its gameplay. And since it’s a remaster of the first game in the series I ever played, I do have a special place for it in my heart.

But I wasn’t entirely blown away either. I like prettier graphics as much as the next person, and I really enjoyed the new game modes and the more sensitive revision of the native civilisations, but I hoped for more in the way of gameplay improvements – better ways to control your army, better response from the AI once you issue a command, and so on.

We’ll probably have to wait for Age of Empires IV to see an entry in this famous series that truly plays like a modern game, but in the meantime this is, as it says on the box, the definitive and best way to play Age of Empires III. This was always the least-loved of the original series, and it never deserved its black sheep reputation. There’s plenty that makes it special, even today, and if you’ve never tried it, now’s the time to take a look.

It ticks all the boxes it promised to, but feels like it could've gone further with improvements to gameplay, home cities for new civs, and AI.