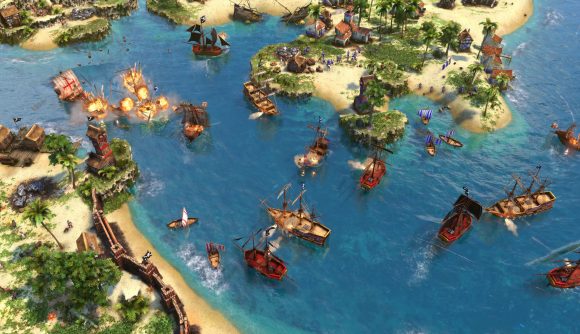 Another update has rolled around for Age of Empires III: Definitive Edition, and it brings a whole range of changes, from new quality of life features, to improvements and modding. Plus, there’s the usual round of balancing and fixes for the RTS game’s multiplayer scene, too.

Headline features for update 20322 include a resources per minute tracker that can be toggled on/off, an attack range indicator option (which will show the maximum range of all ranged units), a new chat system, friends invites, and you can now mark certain mods as ‘safe’ for used in ranked multiplayer. Also, Portugal is not allowed free cows anymore.

That last one is a serious item – 16 civilizations have been given a balancing pass in update 20322, and the Portuguese only have one change: they no longer have access ‘seven semi-fattened cows (II)’ card. The designer notes accompanying this change state that the development team are uncomfortable with the civ having access to this boon in addition to their existing bonuses, and that they prefer to “encourage interactive, map-control based gameplay”.

The mod changes seem especially exciting, and there are several key quality of life changes to how Age of Empires III mods will work now. 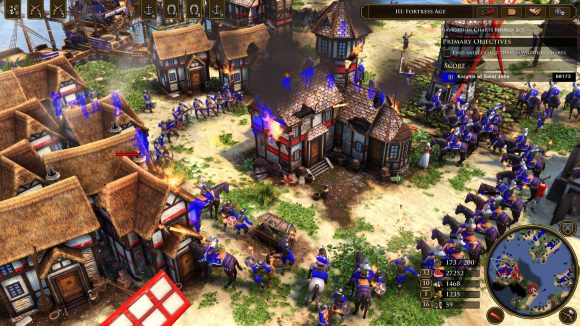 Mods will no longer update automatically when launching a game; instead, you will be prompted to update after you have launched the client. Broken subscribed mods will now be fixable in-game as well, allowing you to reinstall them without needing to exit the client.

You can also flag certain UI, sound, movie, and custom map/scenario mods (as long as the game data isn’t changed) as ‘safe for multiplayer’, which will allow you to use them in ranked games and while searching for casual games, even if the host doesn’t have the mod themselves. Ongoing investigations include a bug around units getting stuck, and they are aware of issues with Steam invites, as well as Xbox Live invites via Steam.

There’s plenty to digest from the update 20322 patch notes, so make sure you give them a read if you’re interested in knowing more.