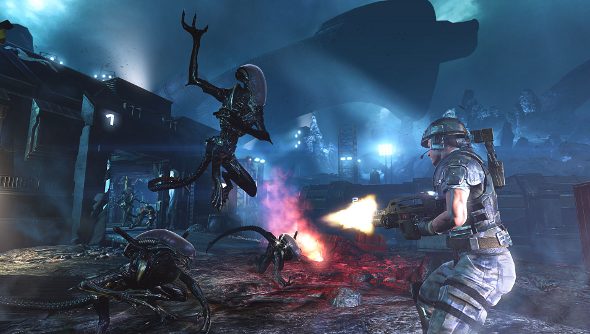 The legal drama surrounding Aliens: Colonial Marines and the class action lawsuit against publisher Sega and developer Gearbox continues, with both parties attempting to place the blame on the other. Court documents filed this week by Sega allege that Gearbox was just as responsible for the marketing, and thus should be included in the suit.

The suit claims that the game was falsely advertised, particularly at E3 2011, where Pitchford and co showed off a demo to press that wasn’t representative of the actual game.

In July Gearbox attempted to get out of the lawsuit, because the company lost money on the game and had not receive royalties, and also because the class was too broad, as there was no way to know how many people bought the game due to the E3 footage. Thus, Gearbox requested summary judgement.

Less than two weeks later, in August, Sega attempted to settle the lawsuit with $1.25 million, clearing them from further litigation in the matter. This was, however, only going to cover Sega, leaving Gearbox out in the cold.

Gearbox was told they could be included in the settlement, but only if they paid out $750,000. But the developer is now trying to get the settlement agreement thrown out as they weren’t part of the negotiation and, as a contractor, shouldn’t be held responsible for the marketing. But in the motion filed this week, Sega claims otherwise.

“The parties had to mutually agree to the ‘precise particulars of marketing assets’ delivered by Gearbox. Gearbox’s participation — Randy Pitchford’s, in particular — was a key element in the ACM marketing strategy from the beginning.”

The blame for the E3 demo has been placed at Pitchford’s feet as well. An internal email states that Gearbox representatives had told the publisher that the demo was the standard the game should be held to.

“During one of my conversations with Gearbox today I verified that the E3 Demo is indeed the bar that we should use to determine where the entire game will be,” Matt Powers, senior producer at Sega of America wrote “That is Gearbox’s plan and what they believe in. I just wanted to double-check with them and since I did I figured I would pass that along to you.”

The documents produced by Sega also list several other instances where Gearbox staff made announcements without consulting the publisher or even when requested by Sega not to. This included an unapproved screenshot, announcements made on the game’s website and “leaks” during panel sessions.

“I spoke face to face to [Gearbox’s Steve] Gibson about their persistent panel leaking,” Sega’s Matt Eyre wrote in an email. “Effectively — it’s Randy [Pitchford] doing whatever the fuck he likes. Apparently he did it twice on [Borderlands 2] also, against, against all plans and despite the fact they asked him not to. I think our best result here is that we have no more panel sessions …”

The documents also mention the royalties that Gearbox claimed it never received in its own motion. They state that Gearbox was paid advance royalties at specific milestones during the game’s development.

What a bloody mess.