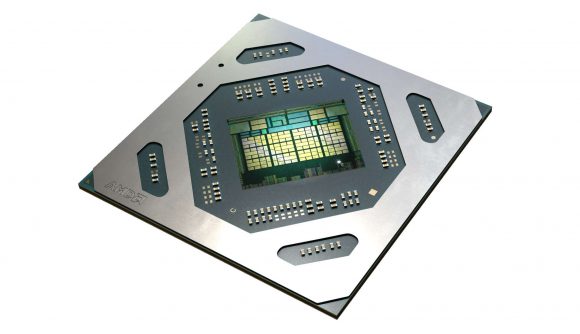 It’s time to get angry people. The polo necks are stealing our mainstream graphics cards and slapping them into $3,000 non-gaming laptops with barely an RGB between them. Yes, AMD has gotten completely into bed with Apple and looks like it’s giving the fruity folk exclusive access to the full Navi 14 GPU for its new 16-inch MacBook Pro.

After kinda launching the Navi-powered AMD RX 5500-series graphics cards last month, with a curiously cut-down Navi 14 GPU, we were left wondering what AMD was doing with the full RDNA silicon it had at its disposal. And now we know; AMD’s selling it at a premium for Apple to put into its premium laptops.

The RX 5500M and RX 5500 laptop and desktop GPUs for the PC come with a core configuration of just 22 compute units and therefore 1,408 RDNA cores. But Apple is listing the new MacBook Pro 16 with a 24 compute unit Radeon Pro 5500M which will contain the full 1,536 core version of the Navi 14 GPU.

There are a pair of different Radeon Pro 5500M configurations on offer to the MacBook elite, one with 4GB of GDDR6 and one with 8GB of GDDR6, but both still contain the full 24 compute unit Navi 14 GPU. It’s only the great PC unwashed that have to make do with the lowly 22 compute unit configuration. Whenever AMD deigns to release it to our huddled masses anyway… 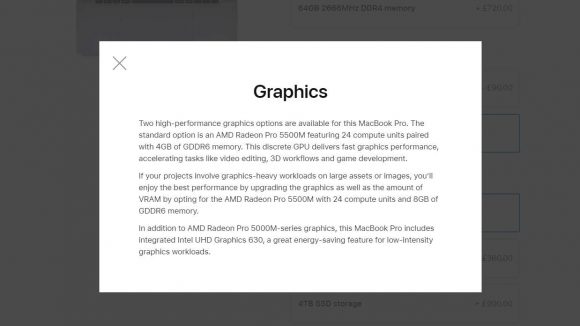 Apple has also announced AMD’s 5300-series of graphics cards, with the lowest spec configuration of the MacBook Pro 16 coming with a 20 compute unit Radeon Pro 5300M sporting just 1,280 RDNA cores and 4GB of GDDR6 memory. Though that will still set you back some $2,400.

The only specs we’ve been given for the desktop version of the RX 5500-series cards on the PC have the 1,408 core configuration, which suggests that the 24 CU part is an Apple exclusive.

But hey, we may still one day see a Radeon RX 5500 XT that comes with the full Navi 14 GPU if Apple lets us PC people have one, begging like dogs for scraps from the fruity table. Otherwise AMD may just ship out the RX 5500 XT model as the 8GB part with a slight clock speed bump and a paltry 22 compute units.

We have seen previous mentions of multiple Navi 14 GPU products, and it seems that the desktop and mobile models will cover both the RX 5300 and RX 5500-series cards to come.