AMD, Intel, and Nvidia share prices dropped sharply over the weekend as President 45 announced that another $325bn worth of imported Chinese goods will face the same 25% trade tariffs that have already been imposed in the current US/China trade war. The shockwaves reverberated around the semiconductor industry as the market and analysts grow more concerned over the impact the fresh tariffs might have.

After the tweeted announcement, where all US policy now seemingly gets its first airing, the country’s top trade negotiators have confirmed that they will be moving ahead with the threatened extra tariffs. Previously the 25% tariff was only on $50bn worth of high-tech goods, with 10% on another $200bn. As of this Friday there will be a flat 25% tariff across the board, with $325bn of currently untaxed goodies getting the same treatment.

AMD took the biggest percentage hit before the markets opened on Monday morning, dropping more than 5%, while Nvidia’s share price dropped by more than 4%. Intel wasn’t as badly affected, losing only 3% of its own share price.

All three tech companies have seen their numbers recovering, but have yet to get back to the same levels as prior to Trump’s twitter policies. The market is still concerned about how China will retaliate and, as the semiconductor industry is very sensitive to demand from China, it could be the sector hit the hardest by the escalation in the ongoing trade war.

Before the bad times: The best graphics cards to buy now

And there is the suggestion that graphics card manufacturers could be the ones to suffer the most.

What does the trade war mean for PCs?

“A major concern here,” says RBC analyst Mitch Steves in a Business Insider report, “the products would be deemed mission-critical and the US would prevent shipments to China, or tax them heavily.

“We think China trade talks will negatively impact our universe. Most notably, we think GPUs and Semi-cap are most at risk to the downside if tensions continue to rise.” 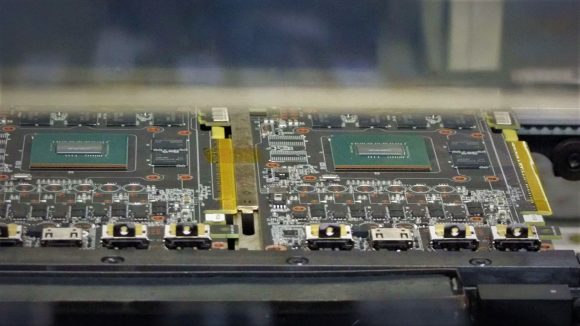 Analysts are also concerned that, as a large number of tech products are manufactured in China, or at least demand components from there, the escalation will end up costing US consumers as price to the end-user will also rise.

Trump counters that in the best way he knows how, by tweeting. That way there is no burden of proof required…

….of additional goods sent to us by China remain untaxed, but will be shortly, at a rate of 25%. The Tariffs paid to the USA have had little impact on product cost, mostly borne by China. The Trade Deal with China continues, but too slowly, as they attempt to renegotiate. No!

“The Tariffs paid to the USA have had little impact on product cost,” he says, “mostly borne by China.”

But it is at least a similar position that AMD held regarding the impact of the trade war back in October. Back then CEO, Dr. Su, saw the trade war as an “opportunity to gain [market] share” and that the company’s dispersed manufacturing pipeline meant that AMD shouldn’t be materially affected by the tariffs.

Whether that is still the case, we’re not entirely sure.. there was certainly no mention of the trade war in AMD’s latest earnings call.