AMD CEO, Lisa Su, is rightfully remaining positive about the company’s prospects in the face of a difficult week on the stock market, and even sees Pres. 45’s trade war with China as an “opportunity to gain [market] share.”

The last few days may have looked a little tough for AMD, with the company missing its projected figures for the last quarter by a fairly sizeable margin, but that doesn’t tell the whole story of a company still on the rise. There are great opportunities in the CPU sector, with both its desktop and server departments making genuine inroads into Intel’s business, and the potential for both a performance and process lead over its rival with the new 7nm Zen 2 processors launching next year.

The graphics market, however, has been dragging AMD’s revenue down over the last year, with the cryptocurrency cash-cow being chopped into chuck steak and offering “negligible” revenue for the company. It’s also meant a large volume of stock sticking around unsold in the GPU inventories of the world.

In an interview with Barron’s Dr. Lisa Su has said that the tariffs won’t be something that drags AMD down. She’s stated that it shouldn’t be materially affected by the current trade war, which sees 20% tariffs now, and 25% tariffs added to a number of high-tech segments coming out of China come January. Because of its dispersed manufacturing pipeline, Dr. Su says that while the tariffs will be adding “complexity to the supply chain,” AMD should be fine. 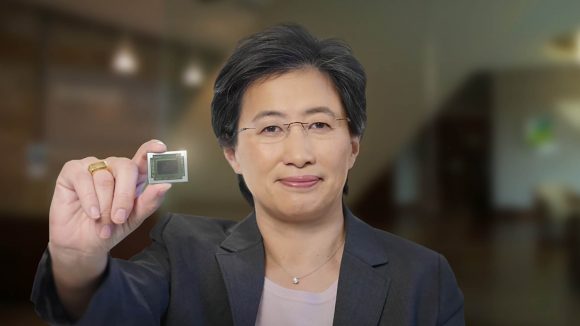 The same cannot be said for the wider PC industry and, more importantly, for us actual PC component buyers. The tariffs are going to affect graphics card makers, motherboard manufacturers, and chassis builders, as they all have to use many different elements to put their final products together, with a lot of manufacturing in China.

For AMD’s own graphics card development, however, things have been looking rather bleak, especially on the consumer front. But that may soon change, with a new RX 590 card coming out in the coming weeks, hoping to improve on the top Polaris GPU of the current generation. It’s unlikely to be hugely different from the RX 580, but higher clock speeds could result in a 7% performance lead over Nvidia’s mainstream GTX 1060 card.

That looks like a stop-gap measure, though, aimed at taking advantage of Nvidia’s decision to only release high-end 20-series GPUs, and ignoring the mainstream market for the time being. The real next-gen graphics cards from team Radeon will be the AMD Navi GPUs coming early in 2019.

And Dr. Su claims that AMD will be “competitive in high-end graphics,” which seems to fly in the face of the accepted assumption that Navi will only be a mainstream product. Though she could simply be referring to the company’s advances with regards to the professional Radeon Instinct cards landing in 7nm this year.