A new AMD graphics card ID has been spotted in a recent Linux kernel patch – a previously unseen Polaris 10-based PCI ID – with the enigmatic title 0x6FDF. There’s a good chance that this is either a fresh rebrand of an existing Polaris GPU, or AMD is going to release an updated version of its mainstream graphics architecture. And that means we might finally be seeing an RX 590 some two years after the first Polaris GPUs launched.

There was always speculation that AMD would launch higher-end versions of its Polaris GPUs, partly because at the 2016 launch of Polaris indicated to us the naming scheme for the new graphics cards was set to house a top-tier RX 490 sitting above the RX 480 and RX 470 cards. Though it was never used.

That, and the fact that AMD almost did release the RX 490, except not for the PC, but effectively dropped it into the Microsoft Xbox One X. Now, the Scorpio GPU inside the Xbox One X isn’t exactly identical to a desktop Polaris chip, but it’s using the same GCN 4.0 tech and sports 40 GCN 4.0 Compute Units (CUs) as opposed to the 36 similar CUs used in the RX 480 and RX 580.

Fitting 40 CUs, and therefore 2,560 GCN cores, into a slice of PC graphics silicon would probably only deliver a performance boost similar to the delta between the RX 570 and RX 580. But that does mean it probably wouldn’t deliver the 4K performance that the original thinking behind the RX x90 labelling was seemingly intended. 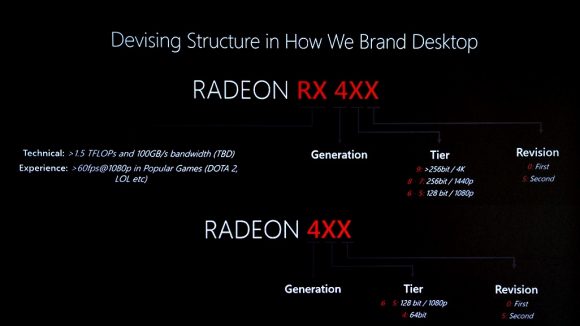 The new ID was reported by the ever-vigilant Michael Larabel over at Phoronix, and he’s not seen hide nor hair of the 0x6FDF ID in any previous driver list. And we’ve not been able to find any mention of it anywhere on the internet either.

It is possible that this is simply a slight update to the way the Polaris 10 GPUs are referenced in the Linux drivers. Normally we’d see that 0x67DF ID used alongside the CA, CC,and CF versions, and this new 0x6FDF ID looks mighty close to the previously used code. That could indicate the RX 570 and RX 580 are being given a slight refresh, or maybe even a rebrand – anyone taking bets on an RX 680 coming before the new year? 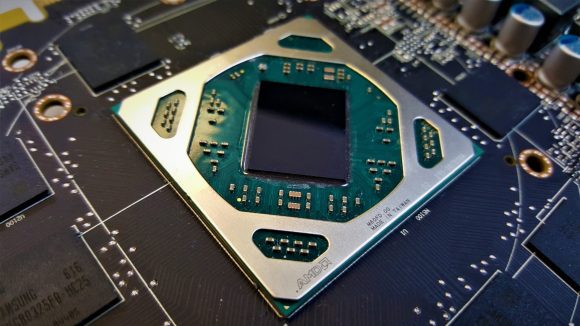 We weren’t expecting any new AMD consumer GPUs this side of Christmas, with the 7nm Vega cards being designed for the Instinct, machine learning line, and the AMD Navi architecture set for the first half of 2019. It would be a surprise for AMD to launch another Polaris chip, but given the fact we won’t see any mainstream Turing GPUs this year, – with the expensive RTX 2070 launching in October and a RTX/GTX 2060 not likely until next year – it might be a smart move.

Getting a new mainstream GPU out of the door with no fresh competition could give AMD a decent sales win over the Christmas/holidays period.