Check out our pick of the best video cards you can buy today.

Back in November, rattling alongside the hype train for Star Wars Episode 8: The Last Jedi, Nvidia launched the Star Wars Titan Xp Collector’s Edition cards. In both red and green trim, the powerful limited edition cards both featured a fresh design, mimicking the dark and light side of the Force.

And now, with Star Wars day ringing around our ears, here’s the AMD RX Vega Star Wars Collector’s Edition. Now, unfortunately AMD haven’t been able to get the license to create the official merchandise themselves, but we thought it was unfair that Nvidia got to have all the fun, so we’ve created our own bespoke design to spruce up the look of the reference edition AMD Vega cards.

We even updated the AMD Vega packaging too. 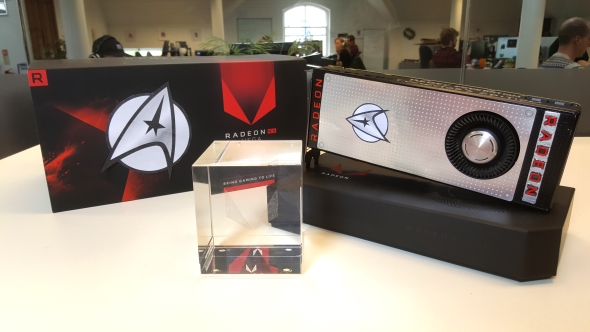 What you see here is the Rebel Federation variant, to support the light side of the Force, but we’re also working on designs for the Klingon Empire version for the dark side. Y’know, to give that whole ying-yang, eternal balance kind of effect that George Roddenberry was going for all those years ago when he created The Star Wars.

The specs are all largely the same as the base RX Vega 56 card that lies beneath the gleaming metal armour and rebellion decals we’ve added to the finished design. As such it’s sporting the AMD Vega 10 GPU, with 3,584 GCN cores and 8GB of HBM2 to act as the frame buffer. 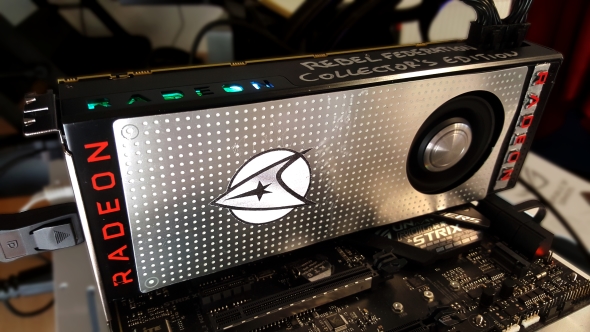 To be honest in order to get it working properly we’ve had to knock the clockspeed back a notch as the brushed aluminium impeller fan we’ve added is slightly smaller than the basic black reference version and isn’t quite as capable of the same level of GPU cooling. It’s something we’re working on if there ends up being a shipping version.

Well, there’s also the fact that it doesn’t quite fit properly so it’s held in with sticky velcro rather than screws. And it does kind of spin itself loose at high speed, which some of our team have suggested might impede its performance. 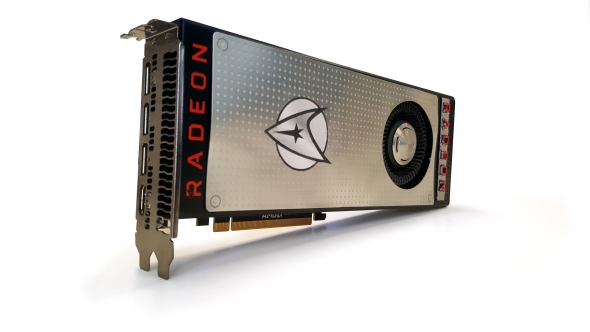 Teething troubles… you know the drill. It’s not like the original Vega was perfect when it launched and it’s subsequently offering better gaming performance than ever. Same here.

As we mentioned earlier, AMD don’t have the license, and to be fair neither do we, but if you’d like us to replicate this stunning, fresh build with one of your AMD graphics cards, we’d be only too happy to carry out thesame extensive modding work for you.

We wouldn’t even charge you. Because we’d probably break your card, and it would be terrible if you’d paid us to do that.