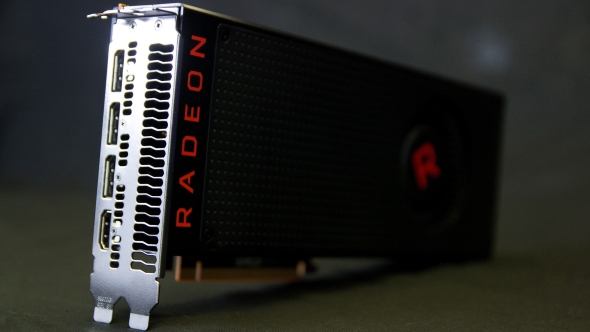 The new AMD RX Vega 64 cards went on sale yesterday… and sold out in a few minutes. But British retailers, OcUK, are suggesting the £450 pricing was just a special launch price and the real price will be some £100 more.

Check out our review of the AMD Radeon RX Vega 64.

According to Overclockers UK, the £450 launch price in the UK is just a special offer designed for a limited window and is set to be withdrawn in the near future. With the cards selling out in some 20 minutes at the UK retailer they’ve already pushed up the pre-order prices for their standalone cards to £549, but are at the very least adding in free codes for Wolfenstein II and Prey.

“The good news,”OcUK’s Gibbosayson their forum, “is AMD are rebating early launch sales to allow us to hit £449.99 on the stand alone black card which has no games. This is a launch only price which AMD at present are saying will be withdrawn in the near future, when if it happens is unknown, but remember do not be shocked if the price jumps nearly £100 in a few days.”

It looks from this that the launch price could be some weird special offer despite our assumption it was the price the cards were always meant to retail for.

We reached out to OcUK for a little clarification on the pricing situation.

“Launch price was $499, AMD even worded it as such,” Gibbo explains. “They gave us a set quantity to sell at this launch price which was several hundred and limited to 1pc per customer. We expected it to last several hours, maybe even a day, unfortunately it lasted around 20 minutes.

“AMD unfortunately have worded their comms pretty poorly, so now customers just think the retailers are upping the prices to make more margin, the reality is if they did not increase the prices they would lose a lot of money as AMD support ended once the set quantity was sold.”

That all kinda suggests the real RX Vega 64 price is going to be around £550, or the price of an overclocked GTX 1080. And that doesn’t make for a pretty comparison for AMD because, as you can see from our Vega performance benchmarks, an overclocked GTX 1080 absolutely hoses the AMD RX Vega 64 even in the DirectX 12 and Vulkan tests it was previously nailing when put up against a reference GTX 1080.

We did expect retailers to push the price up when the RX Vega 64 stock-levels became tight, but we thought that might be some temporary measure and once more cards were in the channel it would settle back down to the suggested retail price. Gibbo’s comments, however, make it sould like a return to £449 was never really on the cards at all.

We’ve spoken to AMD UK and they’ve told us they know nothing about any launch rebates, stating they’re only able to provide a suggested etail price (SEP) to online shops and can’t actually enforce any pricing at all. Fingers crossed we’ll get some more clarification from the red team soon.

Whatever the real situation is, if the Radeon Pack shenanigans weren’t confusing enough, all this talk of special launch rebates is just making things even muddier.