A little light leakage is always expected before a big new hardware release and, for AMD’s graphics team, they don’t get bigger than the unveiling of their new Vega GPU architecture. So it’s fitting there’s been some feature discharge ahead of the Vega architecture preview at CES on Thursday.

With great GPU tech comes the need for a great monitor. Here’s out pick of the best gaming monitors around today.

As the new year dawned, and I was holding down my first breakfast of 2017 like a hero, AMD launched a surprise wee teaser site and trailer for their new AMD Vega graphics tech. The ‘After the Uprising’ vid is below and sees AMD trying to drum up support for their new GPUs. Teehee.

But as they’re counting down to the AMD Vega Architecture Preview on Thursday January 5 at 9am EST (6am PST, 2pm GMT) some enterprising folk on the 3D Center forums picked up a wordcloud image from the depths of the site itself. 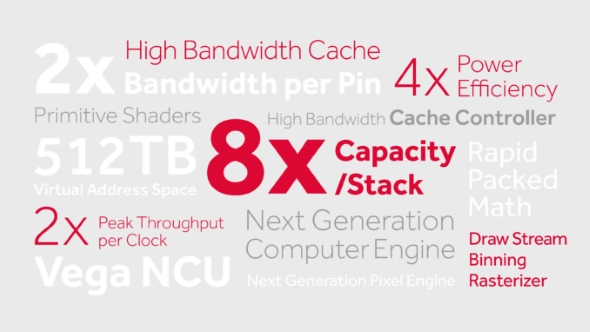 It looks like a Vega features list for the new architecture which is likely to sit front and centre on the site once the countdown runs dry. There’s lots of numbers and GPU engineering buzzwords, like Draw Stream Binning Rasterizer and Rapid Packed Math, but it also confirms a few rumours about the tech and offers some exciting peaks behind the curtain too.

We already knew we’d be getting a new compute unit with Vega, but the image confirms the new Vega Next Compute Unit naming. But it’s the 4x power efficiency bit that stands out for me and is something which is vital for successive generations of GPU if they’re to keep pushing performance forward. Offering twice the peak throughput per clock and 8x the VRAM capacity per stack, presumably over their previous generations of top-end graphics architecture, it reads like a who’s who of high-end GPU tech.

And that’s important because Vega needs to kick off with a proper high performance GPU to really take the fight to Nvidia with their expected GTX 1080 Ti unveiling this month.

We’ll have the full details on AMD’s Vega tech preview once Thursday rolls around.