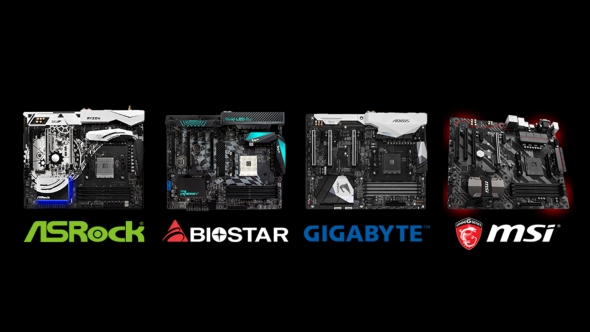 Update January 5, 2017: AMD have shown off the first official AM4 motherboards which will form the bedrock of all the new Ryzen-based PCs we’ll get this year. Well, once the AMD Zen architecture finally goes live anyways.

Read more: if you want the full low-down on AMD’s next-gen processors check out our guide to the new AMD Zen CPUs.

At the CES event in Las Vegas AMD showed off 16 AM4 motherboards from ASRock, Asus, Biostar, Gigabyte and MSI in a variety of different chipset configurations. The basic specs of the new chipsets give them dual-channel DDR4 memory support, NVMe and M.2 SATA connections, USB 3.1 in both Gen1 and Gen2 form as well as standard PCIe 3.0 compatibility too. 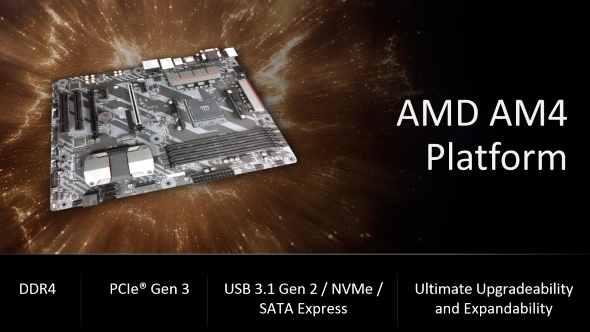 The boards on display out in the CES tech oasis are:

We’ve heard precious few details about the AM4 chipset, code-named Promontory, which is set to form the bedrock of all new AMD machines now and for years to come. And that’s pretty rubbish considering the AM4 chipset has been released. Kinda. It’s out there in OEM form for manufacturers, like HP and Lenovo, to stick in their own machines alongside the new (non-Zen) Bristol Ridge APUs.

Us normal consumer-type people won’t be getting our mitts on an AM4 board until the new year.

At least we are now starting to hear a little more about the new designs though as Planet3DNow in Germany have unveiled a slide detailing the AM4 lineup. As well as the X370, B350 and A320 chipsets which have already been mentioned, there is also going to be dedicated X300, B300 and A300 chipsets specifically created for small form factor motherboards.

It’s interesting that AMD will be created a specific line of SFF boards/chipsets, and very pleasing that there will be a high-end X300 variant which will hopefully contain all the good stuff from the full ATX-scale X370 chipset. Whether it follows that the smaller X300 boards will support multi-GPU arrays we don’t 100% know, but it looks like it’s going to be possible to build incredibly powerful mini AMD gaming PCs when Zen rolls around. 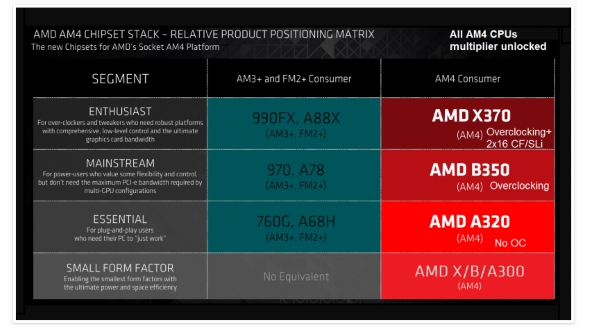 The full-fat AMD X370 chipset has been designed to offer the ‘ultimate graphics card bandwidth’ and as such is expected to offer full x16 connections for twin AMD CrossFireX or Nvidia SLI setups. This is going to be the high-end base for the top AMD Zen PCs and will take advantage of the 36 PCIe 3.0 lanes that are rumoured to be inside the first Summit Ridge Zen CPUs. That makes for 32 PCIe 3.0 lanes to cover a twin GPU array and a further four lanes for a processor-connected PCIe SSD. That’s increasingly important for high-end rigs, especially if Samsung’s predicted 236% SSD growth comes to fruition.

All AM4 processors are set to be multiplier unlocked, no need for Black Editions or K-series monikers for AMD’s new processors. And fingers crossed that means we should see some impressive overclocking performance out of AMD’s Zen CPUs. The top-end AM4 X370 chipset is noted on the above slide as providing ‘Overclocking+’ and will then offer the greatest level of control over every aspect of your system to help you get the highest performance possible if you know how to tweak.

Overclocking’s easier than it’s ever been – if you want to try it out yourself on your CPU or graphics card check out our easy PC overclocking guide – and it looks like AMD wants everyone to have a go with Zen as they’re also bringing overclocking to the mainstream AM4 B350 chipset too. There’s no mention of multi-GPU support in that segment though, aiming for gamers who don’t need multi-GPU bandwidth. That said, it might not be impossible for motherboard manufacturers to add a further PLX chip if they want to drop some sort of CrossFireX or SLI support into mainstream boards.

Multi-GPU machines make up a miniscule percentage of today’s gaming PCs though, so opting for overclocking instead of multi-GPU support on their mainstream chipset does make the most sense. The B350 boards are likely to make up the majority of AMD Zen machines going forward, and they look like they’ll still have the power to make for powerful gaming rigs. 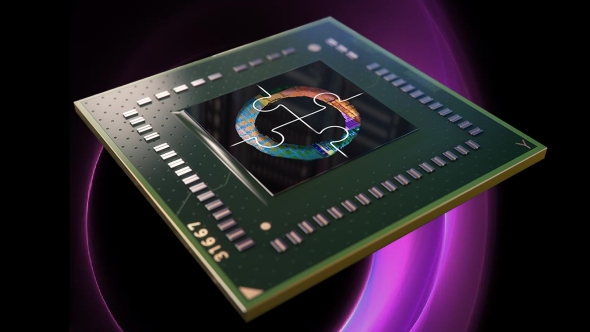 The low-end ‘essential’ A320 chipset is the most basic of all the future AM4 chipsets, with overclocking disabled and the expectation that this base chipset is going to be for PC people who just want their machine to work and don’t want to get elbow deep with CPU multipliers and voltage tweakery.

The AM4 chipset lineup looks like pretty sensible stuff from AMD. There’s little radical, but neither is there anything which is setting off any alarm bells in my tiny little mind. The addition of a dedicated small form factor chipset is interesting and I’m keen to see what will end up differentiating the full-scale and smaller boards aside from size.

If all goes well we should have our hands on Zen and the new AM4 chipsets once the dust settles on CES 2017 in January. And I for one can’t wait.