If you want to get a sneak peak of what the new AMD Zen Summit Ridge CPUs are capable of then you can jump into a livestream of their recently announced New Horizon event on December 13.

But what’s the top processor right now? Check out our guide to the best CPUs for gaming.

AMD are promising an exclusive advance preview of Zen with eSports and Evil Geniuses legend PPD putting the chip through its paces. You’ll need to sign up for the livestream though, with AMD hosting a sign-up page complete with countdown.

It’s interesting that AMD are focusing directly on gaming for the first public preview of their new Zen CPU architecture, and shows just how dedicated they are on wrestling the hearts and minds of gamers away from Intel. 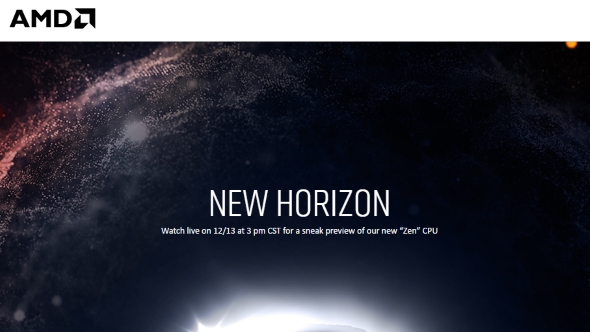 But with Intel set to launch their own new Kaby Lake CPUs in January, including an unlocked, overclockable K-series Core i3 for the first time ever, we look set for a real CPU showdown to kick off 2017. Both companies look like they’re pinning their hopes on gamers picking their processors.

We don’t have a hard and fast date for the final release of Zen, but there are rumours of a January 17 release leaking from a Chinese motherboard partner. AMD though are still sticking with an official Q1 2017 release right now. We should see the eight-core, sixteen thread AMD SR7 chips arrive first with the quad-core, eight thread versions arriving a little later.

With performance expected to match Intel’s top ‘Extreme’ processors AMD’s high-end Zen chips are thought to be arriving at around half the price. Touted prices have the eight-core Summit Ridge Zen retailing for around $500, with slower octo-cores at around $350. Potential six-core and quad-core versions are then going to be even more tempting for gamers with prices well below that.

These are exciting times to be a PC gamer and tech enthusiast, but which are you most excited about? AMD’s Zen or Intel’s Kaby Lake?