Gearbox chief Randy Pitchford took to the stage over at AMD’s Next Horizon Gaming event to speak a little more on the company’s ongoing technology partnership with AMD and how it’s implemented this functionality in Borderlands 3.

The red team just announced its Radeon RX 5700 series GPUs, the RX 5700 XT and RX 5700, over at its E3 show. These are kitted with the latest RDNA architecture and will launch on July 7. And Borderlands 3 developer Gearbox is set to make the most out of the new technology suite that AMD is introducing with its Navi 5700-series GPUs: FidelityFX. This is a suite of optimisations and technologies set to make developing for AMD GPUs a little more dev-friendly.

“Gearbox and AMD Studios have signed a multi-year agreement so we are kitted out with all the latest hardware from AMD,” Pitchford says during the event. The studio will reportedly be set for years to come with the latest AMD silicon to ensure its game are best optimised for the latest red team tech.

So let’s run down a couple of the major features of FidelityFX.

Read more: These are the best gaming mice today

Contrast Adaptive Sharpening and Radeon Image Sharpening both help clear up murky textures for a cleaner overall scene. It’s only a small tweak, but AMD hopes that the ostensibly zero overall performance hit with either will make this new functionality appealing to developers to implement. 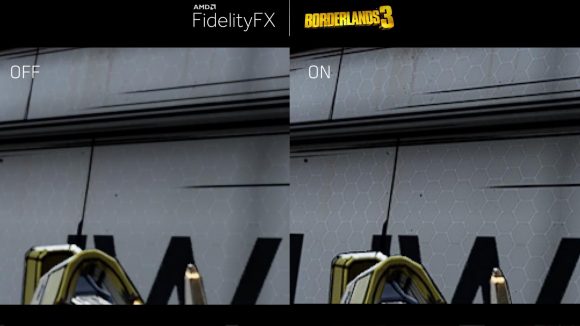 So far the list of developers signed on includes: Ubisoft, Gearbox, Rebellion, WB Games, Codemasters, Capcom, and Unity – along with many more.

AMD also announced Radeon Anti-lag to improve click-to-response times in-game. Along with the above, this feature is set to debut with the RX 5700-series, and we can expect much more from Gearbox, in partnership with AMD, for years to come.