AMD’s new Navi-powered RX 5700 XT and RX 5700 graphics cards will introduce a new feature exclusive to its GPUs, Radeon Anti-Lag (RAL). The feature claims to cut input lag by as much as 35% in Fortnight. AMD has just announced the new cards at its E3 Next Horizon Gaming event, along with some new features aimed at improving not just performance and fidelity, but also gaming response times.

Input lag is basically the time it takes for you to click your mouse, hit a button on your keyboard or controller, and for that movement or action to be represented on the screen. In normal single-player gaming it’s not really an issue anymore; standard PC input latency is now so low that it barely even registers. Switch to online gaming, however, and suddenly those fractions of a second of lag can genuinely make the difference between life and death… in-game. Obvs.

When you’re gaming at 60fps, for example, the input lag is generally around 57ms – AMD showed as much on stage with a side-by-side demonstration of the new Radeon RX 5700 XT against Nvidia’s RTX 2070 in The Division 2. It’s a good start for AMD as the new Navi-based card is displaying a lower input lag of 56ms against the RTX card’s 59ms. 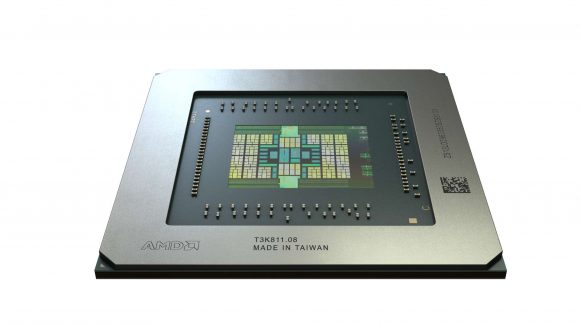 At this level that makes it about four frames of input latency, or motion-to-photon latency, as AMD’s Robert Hallock referred to it on stage.

Pixel pushers: The best graphics cards around… for now

“What if there were a way to decouple the frame rate from the input lag?” he says. “You could make that input lag lower even at the same frame rate.”

By turning on Radeon Input-Lag on the demo, the latency on the RX 5700 XT suddenly dropped down to around 44ms. That’s around a frame or a frame and a half of input lag cut by turning on the new AMD feature. 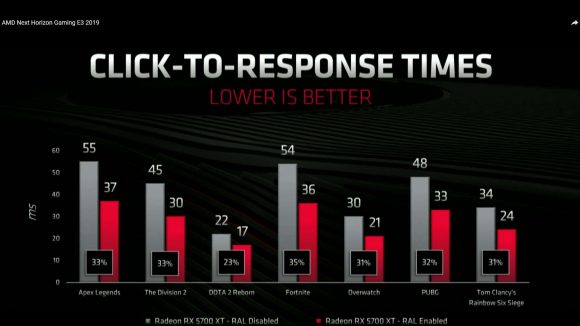 We can’t say exactly how this new technology has been created just yet, but we’ll have more info on that very soon. Suffice to say that in the most popular online games, Radeon Anti-Lag gets you, on average, 31% lower click-to-response times by enabling it.

“If you’re looking for that competitive advantage in DOTA, League, CS:GO,” says Hallock, “where every frame matters, this technology can do it for you.”

We’re looking forward to checking it out ourselves when the new cards go on sale on July 7. The same day as the Ryzen 3000 CPUs, it just so happens…