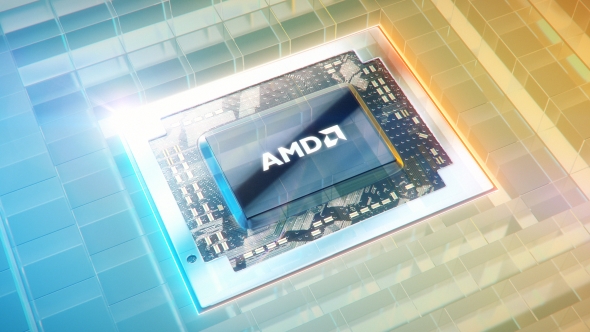 On Monday AMD released their financials for the first quarter of 2017, which were kinda positive but also still pretty scary. Despite nailing an impressively hefty 18% year-on-year revenue boost AMD’s Q1 saw them making a net loss of $73 million.

Should you help fill AMD’s coffers? Check out our guide to the best gaming CPUs around today.

The results were essentially in line with what was expected by the city, which still disappointed some over-enthusiastic folk in sharp suits and $500 haircuts and saw an initial 7% wiped off AMD’s share price. It quickly bounced back to around what it was before the results were released by Tuesday morning, then by the afternoon when the news had spread the share price dropped by some 16%. Eek. 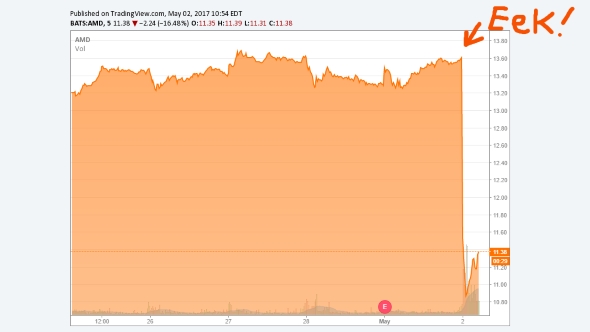 “We achieved 18 percent year-over-year revenue growth driven by strong demand for our high performance Ryzen CPUs as well as graphics processors,” she said. “We are positioned for solid revenue growth and margin expansion opportunities across the business in the year ahead as we bring innovation, performance, and choice to an expanding set of markets.”

And, despite the fact AMD are still making multi-million dollar losses every quarter, the $73 million deficit is at least much lower than this time last year when they were losing $109 million. I mean, the current numbers are still huge, but at least they’re going in the right direction. 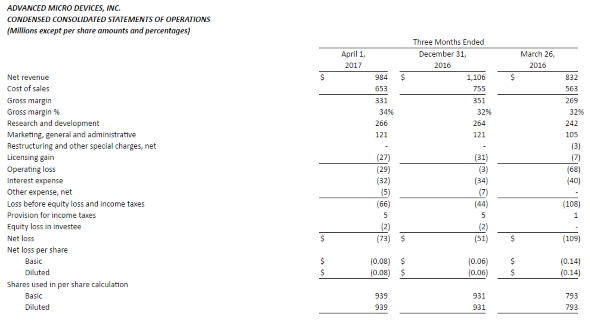 Maybe more worrying though is the fact AMD is still ploughing through a lot of their cash reserves getting new products to market. Around a quarter of their available cash, some $321 million, was burnt through during this last quarter, which seems like a huge amount.

Given they’re going to be releasing new hardware throughout the rest of this year, with the AMD RX Vega GPUs coming before the end of June and Ryzen 3 CPUs arriving in the early part of the second half of this year, they’re going to keep on spending and so surely need to turn those net losses around as quickly as possible. That’s all without mentioning the important releases of their Naples server tech based on the Zen processor architecture or the Raven Ridge APUs, which are also due out this year.

Intel released their own first quarter financials late last week and despite the fact they’re still making huge profits the desktop processor group took a bit of a hit. Though Intel are claiming they’ve not really noticed anything unusual as a result of AMD’s Ryzen release, even if they have announced they will be cutting the prices of their premium processors.