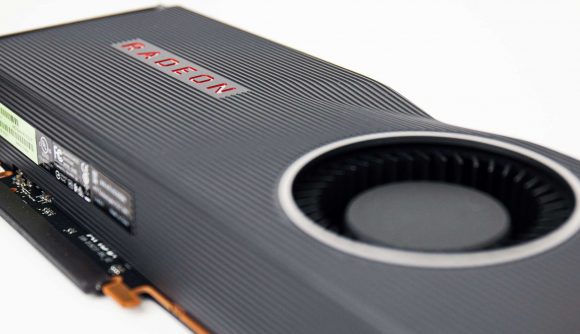 AMD has just put down the phone on its Q2 2019 earnings call, reporting a mixed bag of results: both strong CPU-side results alongside middling GPU and semi-custom revenue as the latter verges on a next-gen console launch. But aside from all that financial doublespeak, during the call’s Q&A AMD CEO Dr. Lisa Su hinted that there may be further high-end Navi graphics cards on the way.

The response came to a question from Rosenblatt Securities’ Hans Mosesmann on whether the red team’s CEO could “give us a sense, if you can, on 7nm high-end Navi and mobile 7nm CPUs.”

“I would say they are coming,” Dr Lisa Su says in response (via Seeking Alpha). “You should expect that our execution on those are on track and we have a rich 7nm portfolio beyond the products that we have currently announced in the upcoming quarters.”

The red team recently announced the RX 5700 XT and RX 5700 over at E3 during its Next Horizon Gaming event. The topmost card, the XT, challenges Nvidia’s RTX 2070 and RTX 2070 Super, yet leaves the ultra high-end Nvidia cards, such as the RTX 2080 Ti, untouched.

AMD has often backed away from this fight, leaving the uber-enthusiast cards to the green team and its wealthy entourage. Rather, we tend nowadays to see AMD’s high-end cards instead compete in the datacentre and professional markets. Yet, with the RDNA architecture at the heart of Navi being built from the ground up for gamers, and with the compute-friendly GCN remaining on the scene, Su’s word may offer hope for a high-end challenger in the gaming space from Radeon yet.

Potentially this high-end GPU is the answer to the Navi 12 rumours bubbling away on Twitter recently.

Or, if we must be pessimistic for a moment, Lisa Su was merely remarking on the likely influx of new mobile 7nm APUs, fitted with RDNA, which launch like clockwork on a cadence slightly behind that of their desktop processor counterparts.

In another aside, there’s good news for AMD fans hoping for an influx of Ryzen 3000 stock. The red team has confirmed that it does not see TSMC’s production as a constraint to its ambition yet, although does admit that cycle times of the complex 7nm node are longer and therefore it takes longer to ramp up.

EUV, which is expected to be utilised further with coming nodes from the major global foundries, is expected to cut processes quantity and duration with complex chip designs.

AMD confirmed it is holding onto an inventory of $1bn, up $60m sequentially due to the 7nm stock ramping up for what AMD expects to be a busy second half of the year.

Overall, AMD graphics revenue has decreased year-over-year, as the red team still struggles to outweigh the offset left by past blockchain-related highs. Not even the successful launch of Ryzen 3000 has been enough to quell the impact of low graphics channel sales.

Semi-custom is also down – unsurprising considering the lack of new consoles in the market. This is all set to change next year as both Microsoft and Sony are expected to reveal new consoles, both of which will be built upon AMD silicon. Until then, while sales are dropping in ferocity, AMD is still shipping some SoC silicon out to console manufacturers: the PS4 recently reached 100 million units sold according to Niko Partners’ Daniel Ahmad – a significant milestone before retirement.