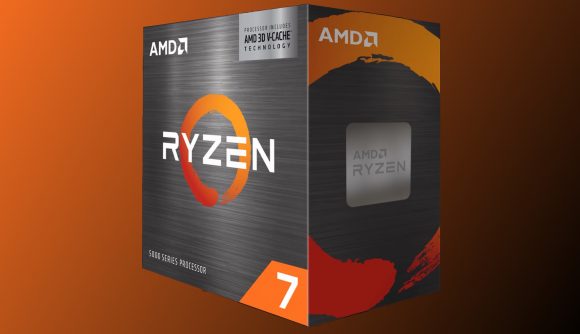 AMD has finally pulled back the curtain on when we’ll be able to get our hands on the Ryzen 7 5800X3D, and just how much it’ll cost to snag what the company is proudly touting as “the world’s fastest gaming CPU.” So, mark your calendars for April 20 and crack open your piggy bank and hope you’ve got $449 USD saved up for what could be the best gaming CPU money can buy.

First announced alongside AMD’s Zen 4 CPUs during the company’s Product Premiere Event earlier this year, the Ryzen 7 5800X3D is the first consumer processor to feature the company’s 3D V-Cache technology. This clever bit of engineering has enabled AMD to pack a whopping 96MB of L3 cache into the new chip by vertically stacking it.

Despite the Ryzen 7 5800X3D’s lower core and thread count compared to the Ryzen 9 5900X, AMD claims that the increased L3 cache helps boost its new CPU champion’s gaming performance by up to 15% compared to its more expensive sibling.

As with all claims made by manufacturers, we shouldn’t just take AMD’s word that the Ryzen 7 5800X3D is the world’s fastest gaming CPU, instead keeping our eye out for third-party benchmarks. However, the prospect of AMD creating another processor that can go head-to-head with the likes of the Core i9-12900K is an undeniably exciting prospect.

This will be an exciting spring for @AMD! From the AMD Ryzen 7 5800X3D to new processors spanning 4 to 8 cores, AMD users have even more options for creating customized gaming experiences. See what's in store!

Regardless, the Ryzen 7 5800X3D looks to be a suitable swansong to AMD’s Zen 3 architecture as the company prepares to move forward to its next-generation Zen 4 chips.