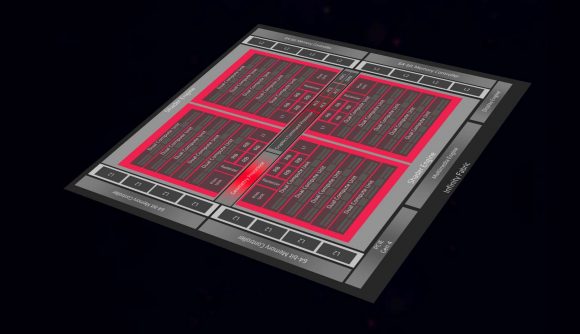 At Samsung’s Exynos On keynote, its latest mobile chipset was announced and is set to appear in its smartphones launching later this year – nothing special here, the company is still using ARM’s own Mali GPUs. AMD and Samsung announced a partnership back in 2019, and now it’s been confirmed that its next chipset will feature AMD RDNA 2-based graphics, the same technology in some of the best graphics cards, the PS5, and Xbox Series X.

No details were given on any actual specs, and don’t expect this to be a graphical performance improvement on phones so great that it’ll make your PC redundant – after all, you can’t fit the power of a Radeon RX 6900 XT into a smartphone chassis.

But, if Samsung’s venture is a success and we start seeing more phones with GPUs similar to those in gaming PCs, it’s good news for gaming on mobile devices. We’ve already seen some pretty impressive ports of PC-based games in the past, such as Fortnite and Grid Autosport onto mobile – although these struggle on a lot of devices from optimisation issues. Still, this collaboration should hopefully lead to more impressive mobile gaming experiences with such similar architectures.

It’s good news for PC gamers too, as AMD putting more research into figuring out how to squeeze performance out of such a small form factor will inevitably lead to improved desktop GPUs in the future.

In other portable gaming news, mobile versions of its RDNA 2 graphics cards are landing in a gaming laptop near you soon, which very well could be a portable replacement for your desktop PC but we’ve yet to see the chips in action.