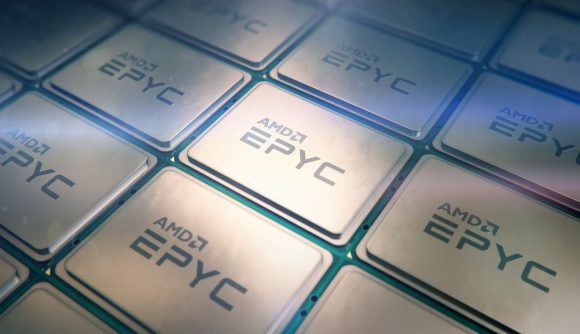 A petaflop computer is capable of performing one thousand million million floating-point operations per second. Picture then, if you can, the capability of a 12.8 petaflop supercomputer – almost thirteen thousand million million operations per second. You’ve just pictured what a subset of the US’s Department of Defense (DoD) will receive from supercomputer manufacturing company Cray. All powered by AMD Zen 2 CPUs – lots of ‘em.

The US Navy Department of Defense Supercomputing Resource Center (DSRC) announced (via Guru 3D) that this Cray Shasta supercomputer will be procured for its High Performance Computing Modernization Program (HPCMP) and will be hosted and operated at Navy DSRC at Stennis Space Center, southern Mississippi. The Cray Shasta will be formed from AMD EPYC (‘Rome’) processor cores and Nvidia Volta GPUs. It will also feature 590TB of memory and 14PB (petabytes) of usable storage, with components being connected by a 200Gbps Cray Slingshot network.

The DSRC has said that this supercomputer will feature exactly 290,304 AMD EPYC 7002-series processor cores and 112 Nvidia Volta V100 ‘General-Purpose’ GPUs (GPGPUs). If these AMD EPYC Zen 2 cores come in the form 32-core chips, then we’re looking at a supercomputer with over 9,000 separate AMD EPYC processors (yes, I went there). If they’re in the form of 64-core rather than 32-core chips, then that’s over 4,500 separate processors… yeah, that one doesn’t work as well. Still a hell of a lot, though.

AMD has already taken the fight to Intel with its increasing server market share, and this latest Frankenstein’s creation helps reflect how far they’ve come. To be fair, in Q3 2019 AMD’s server market share was only 4.3%, but to be even more fair, going from near-zero to just below 5% in a couple of years is a big jump, especially considering AMD is a much smaller company than Intel. If the Ryzen 3990X breaking half of HWBOT’s CPU world records over one weekend didn’t convince you that AMD is capable of producing some pretty powerful stuff, maybe its new 12.8 petaflop supercomputer will.

This AMD and Nvidia based Cray Shasta supercomputer will be “critical to Naval Oceanography delivering future capability upgrades to global and regional ocean and atmospheric prediction systems, to include later this year the Navy’s first Earth Systems Prediction Capability,” says Commander, Navy Meteorology and Oceanography Command (NMOC) Rear Adm. John Okon. It is expected to be online early in the 2021 fiscal year.

AMD is also gearing up for another supercomputer launch in 2021, the Frontier supercomputer that will pip the Intel Xe-powered Aurora system announced earlier this year by half a flop.