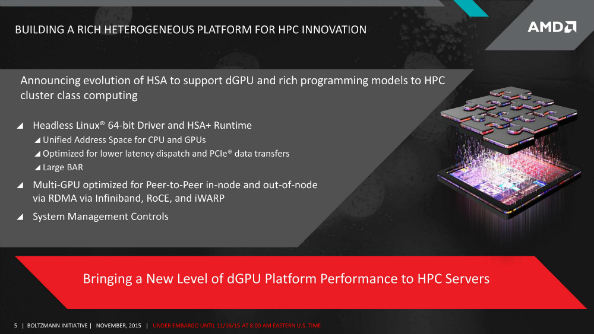 AMD’s announcements at the recent SC15 supercomputing conference in Austin, TX, were as interesting as they were complicated. Granted, it’s a supercomputing conference, not a gaming trade show, so the purpose of the company’s “Boltzmann Initiative” announcement wasn’t to whip gamers up into a frenzy of estimated consumer GPU performance, but to outline their plans, more broadly, in the high-performance computing space. Still, the mention of compatibility with NVIDIA’s CUDA architecture, I couldn’t help but wonder what the Boltzmann Initiative’s knock-on effects might be on gaming graphics cards.

Looking to buy into some AMD hardware while the discounts are-a-flowin’? Cast an eye over our Black Friday PC deals.

The top line is this: AMD are redeveloping their HPC software ecosystem that will compete with, and offer compatibility with, NVIDIA’s CUDA computing platform. CUDA helps CPU and GPU work effectively together in parallel; “co-processing.” It’s been rolled out in the fields of scientific research, finance, and, via the company’s GeForce graphics cards and support in Windows 7 onwards, in gaming. Your GeForce GPU’s CUDA cores can process thousands of computing tasks in parallel, taking the strain off your CPU and minimising the possibility of it becoming a performance bottleneck.

So here’s the interesting bit: in the wake of SC15,Anandtech say AMD’s Boltzmann initiative is intended to “close the gap with NVIDIA and offer an environment competitive (and compatible!) with CUDA.”

The foundation of the Boltzmann initiative, named after statistical mechanics founder Ludwig Boltzmann, is an overhaul of AMD’s drivers. By this I’m not referring to Catalyst Control Center making way to Radeon Software Crimson, but something deeper within the CPU’s fundamental workings. Something altogether more complicated, in other words.

Specifically, AMD are rolling out something called HSA+ (Heterogeneous System Architecture), a new extended programming environment which, in the simplest terms possible, makes it easier for programmers working on applications that target both CPU and GPU. Which is also, to revist an earlier point, a fruit of CUDA’s labour.

NVIDIA’s CUDA has an advantage in HPC because is supports high level programming languages C+ and C++, whereas the AMD-backed OpenCL has historically supported less complex syntax. Earlier this year OpenCL did gain C++ support, but by that time the line had been drawn in the sand and CUDA was the favoured platform.

As a result, again in simple terms, AMD are still vocally supporting OpenCL but simultaneously working on their ownHeterogeneous Compute Compiler, an environment with C++ support that works more like CUDA, and will thus allow developers to write code for CPU, GPU or both using one compiler, one language, and one source file. That in turn makes parallel processing tasks easier to code for. 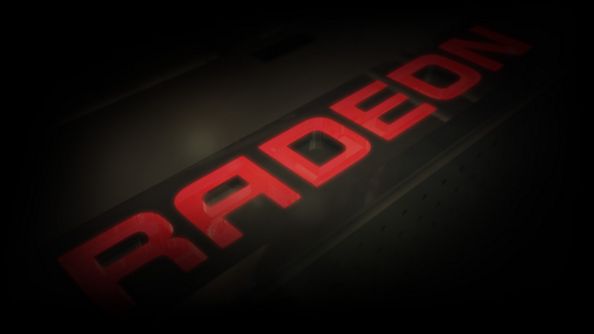 The final piece in the puzzle – brace yourself for another acronym – is HIP (Heterogeneous-compute Interface for Portability). Essentially this is a toolset that allows programmers to quickly and efficiently convert CUDA syntax to AMD’s HCC, keeping a massive group on-side. It’s Google translate for coders, in a nutshell.

Great. But what does that all mean for games? AMD certainly weren’t forthcoming about that aspect as SC15, nor were they when I reached out for comment on the potential knock-on effects of the Boltzmann Initiative on Radeon GPUs in gaming environments:

“Our Boltzmann initiative is targeting FirePro GPUS for enterprise /HPC applications,” an unnamed AMD representative tells me. “The tools are designed to drive application performance across markets ranging from machine learning to molecular dynamics, and from oil and gas to visual effects and computer-generated imaging.” 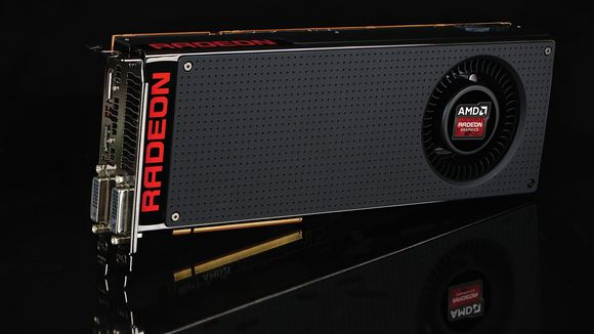 The problem is that all this talk is occuring in the context of HPC, and without expertise in that field it’s hard to interpret the salient points for gamers. But it isn’t going to begin and end with FirePro GPUS; of course it isn’t. Just as Meryl Streep patiently explains to Anne Hathaway in The Devil Wears Prada that no matter how much she turns up her nose at the outlandish creations that grace high fashion catwalks she’ll eventually end up unwittingly buying their forebears from department stores, there’s always a trickle-down in tech.

Maybe the most significant thing about Boltzmann is that AMD aren’t talking about its gaming potential – it’s perhaps indicative of a company carefully devising the best time and place to deliver quite a complex message about why their next line of enthusiast graphics cards will be better, unwilling to break their silence before that point.

{"schema":{"page":{"content":{"headline":"AMD’s Boltzmann Initiative means better CUDA compatibility… but what does it mean for gaming?","type":"news"},"user":{"loginstatus":false}}}}