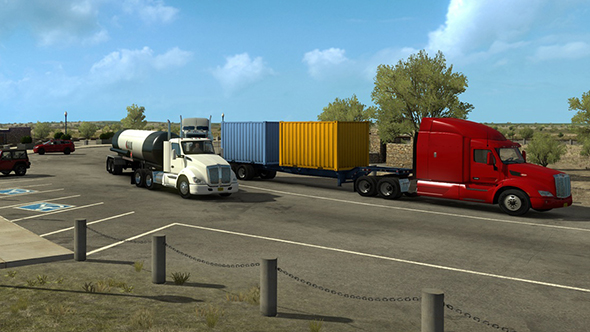 The game of long-haul trucking is about to get even longer-haulier. Would-be truckers now have only a few days left to wait until the release of the New Mexico expansion for American Truck Simulator, with a release date now set for next Thursday, November 9th.

In amongst the huge new chunk of map to roam, the expansion is set to feature some real-life anomalies. In a cute bit of stranger-than-fiction reality turned into simulation, the New Mexico DLC will include a famous stretch of road on Route 66, with specially cut rumble strips that make music if you hit them at just the right speeds.

Planes, surgeons, and automobiles abound in the best simulation games on PC.

You can keep an eye on the DLC’s launch on the Steam store page here. While no price is listed at the time of writing, it’s been anounced that it’ll cost you £9/$12 – not a bad price consider how many hours you’re likely to spend driving up and down those long, dusty roads.

Original Story, October 20th: PCGamesN, this here’s the Rubber Duck, what’s your 20? 10-4, PCGamesN, we got a line clean clear to Albuquerque. That’s right, fer sure, fer sure, we got us a convoy ready to roll to New Mexico.

American Truck Simulator has been fulfilling all my big rig dreams since it came out nearly two years ago, and after a tonne of free content updates it’s finally getting its first piece of paid DLC, extending the map to now include New Mexico. The base game included California and Nevada, with Arizona coming as a free add-on later in the year, which makes New Mexico the fourth state represented in-game.

So what took so long for NM to make the cut? SCS Software spent some significant time in totally reworking the scale of the game world, nearly doubling the size of the southwestern roads by moving from 1:35 scale to 1:20. That fundamental rework slowed down their DLC development and naturally made the addition of new state a much larger piece of work.

The trailer above offers a lovely look at the new locales, with the bonus of a song that somehow simultaneously sounds like Pink Floyd’s Welcome to the Machine and the Animals’ House of the Rising Sun. At least it’s more thematically appropriate than their dubstep trailers.

There’s no specific release date yet for the New Mexico DLC, but it’s been in closed beta tests and is supposed to be out this year, so you can expect it soon. No word on price, either, and previous paid offerings for the game have only included cosmetic items – this’ll be the first new map. You can check out tons of images and details with SCS’s official updates, and while you’re doing that I’ll be putting on some C.W. McCall and reinstalling ATS.