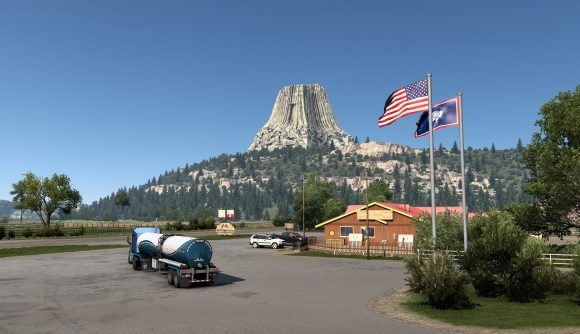 I’m sad, because I’m not going to have pre-release details on American Truck Simulator‘s Wyoming DLC to write about anymore. But I’m also happy, because Wyoming is here. The latest DLC for ATS landed today, and it’s a hit – to the point where it’s the number one top seller on Steam right now.

American Truck Simulator: Wyoming is the number one item on Steam’s list of global top sellers, ahead of the Hellraiser chapter for Dead by Daylight and the new RPG Pathfinder: Wrath of the Righteous. Steam’s top seller rankings are a bit nebulous – it’s unclear how long a stretch of time they cover, but they are ranked by dollar sales, so for some stretch of time today, Wyoming was pulling in more money than anything else on Steam.

ATS itself is also enjoying a massive 75% discount on Valve’s platform right now through September 13, and much of the DLC is on sale, too. So if you’ve been looking to catch up, now might be the time – though apparently we’ve still got a long wait ahead before that Texas DLC rolls out.

Naturally, the devs are quite happy about the early success.

Thank you for your amazing support!🙌#BestCommunityEver for the win!👍 pic.twitter.com/sF03QDrBdZ