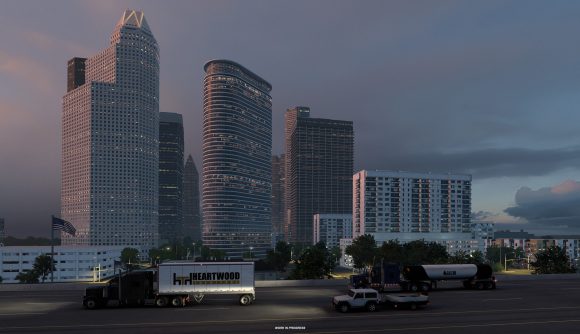 American Truck Simulator‘s next DLC will continue the game’s slow journey east with a stop in the Lone Star State. Yes, Texas is coming to ATS, and yes, it’s coming all at once. If you’re not familiar with North American geography, Texas is huge – much bigger than any other DLC state released to date – and thus the devs at SCS Software aren’t quite sure when the state will launch.

Texas is currently “very early in development,” the devs say in the announcement. “Being one of the largest U.S states, it will bring its own challenges during the various stages of production. Whilst we know many of you are very excited about this HUGE addition to American Truck Simulator, we cannot commit to a release date that is within the year.”

Don’t expect Texas to launch any time soon, but there are plenty of gorgeous early images in the blog above, as well as on the expansion’s newly-listed Steam page. Wyoming is still set to arrive before Texas, so your virtual US will be getting a little bit bigger in the relatively near future.

Over in the world of Euro Truck Simulator 2, the devs are heading to Russia – though not all at once.

Howdy, partners! We've got some very exciting news to share with ya'll 🤠

It is our pleasure, to officially announce the development of Texas for American Truck Simulator! 🇺🇸

Take a stop by our blog for exclusive images: https://t.co/z1u17OGSfb pic.twitter.com/ps9CuzLmIW

For more truck games or simulation games, you can follow those links.