Looking for tips on how to play each Among us map? Once you’ve got intimate knowledge of each Among Us map, your chances of winning will rapidly increase. The very first thing a new Among Us player must learn is the name and location of every room on the map – if you’re trying to figure out which one of your friends is leaving a trail of bodies in their wake, you need to know what it means when they claim to have been doing tasks in electrical while a body was found in medbay? Hint: that’s suspicious. Hella sus, as they say. If you don’t know why, then you need this guide.

It goes without saying that as an impostor, you need to know where all the emergencies take place, so you can direct your unwitting victims accordingly. Not only that, but knowing which vents lead where is instrumental in figuring out suspects’ potential escape routes, as well as planning a robust alibi if you’re an impostor.

Even for experienced Amongers (that’s not what they’re called) who already know these basics, it’s also important to know which parts of the map the security cameras can see, and where the second stages of common tasks like wiring could end up. There are currently four Among Us maps, including The Airship. 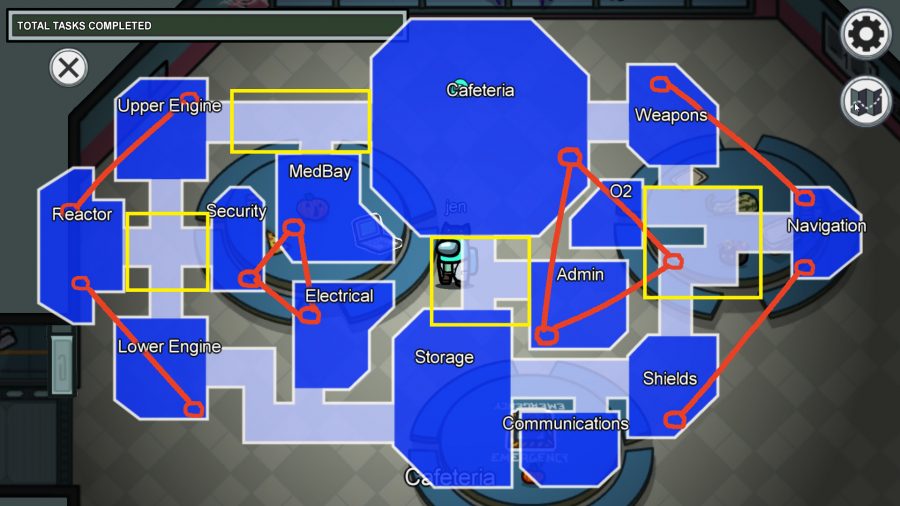 The Skeld is the original Among Us map, so it’s a great place for Among Us beginners to start. It’s a large map with lots of hallways and ample venting opportunities, marked in red on the map. There are security cameras throughout the map, which can be viewed from the security room; the yellow boxes on the map denote the areas that are in vision of these cameras. The emergency button in The Skeld is in the middle of the cafeteria, where you spawn at the beginning of the game.

When enabled, the visual tasks on The Skeld are the second stage of Empty Garbage/Empty Chute, which ends up in Storage, Submit Scan in MedBay, Clear Asteroids in Weapons, and Prime Shields in Shields. If someone has already turned on the shields, there will be no visual indicator for subsequent users, so this can only clear one player.

Even if visual tasks are turned off, players can clear each other in MedBay as only one crewmate can scan at a time; so if two players have the task, they will be able to confirm if another genuine scan is in progress. The sabotages available on The Skeld are Reactor, Communications, Lights, Doors, and Oxygen. The console in the Admin room displays how many players are in each room – it does not display players in corridors, and dead bodies show up as well. 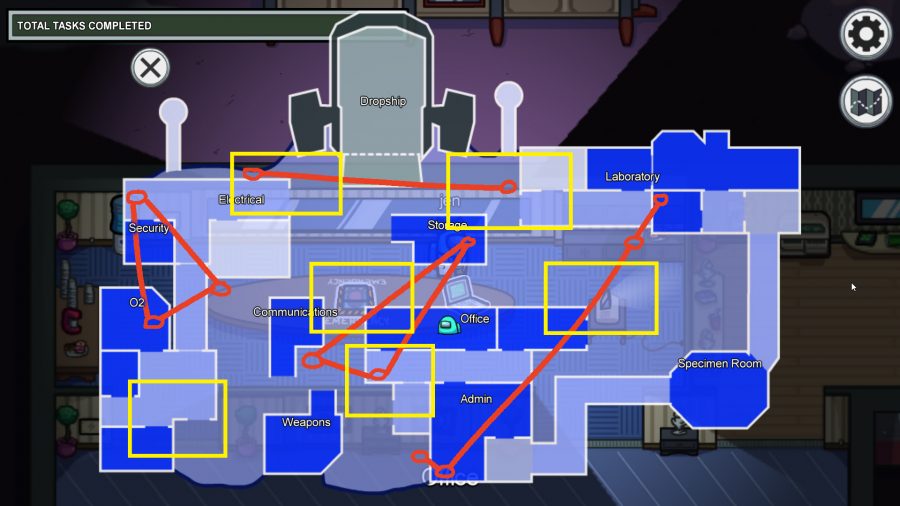 Polus is a large map, with several vent locations (seen above in red) and two decontamination rooms to slow crewmates down. Cameras – marked by the yellow boxes – cover a large proportion of the map, but there is a vent just by the Security room, so it’s not particularly safe to sit on cameras. The emergency button in Polus is located in the office.

The visual tasks on Polus are Clear Asteroids in Weapons, and Submit Scan in the MedBay – as mentioned above, you can verify someone using the MedBay scanner even if visual tasks are turned off. The sabotages available on Polus are Seismic Instability (which is functionally identical to Reactor, though the interfaces are at the top left and right hand sides of the map instead of in a dedicated room) Communications, Lights, and Doors. Doors work a little differently in Polus; their sabotage cooldown is independent of the other sabotage timers; however, locked doors can be opened by players pressing the disabled buttons.

Betray all day: the best social deduction games like Among Us

Polus also has a vital signs machine in the office on the right hand side; this shows the status of each player in the game – green if they’re alive, grey if they died in previous rounds, and red if the player has been killed since the last meeting. There’s also a sneaky way to find the impostor through the key common tasks; each crewmate will have a different key slot, so if two players claim they used the same slot, one of them must be faking it. 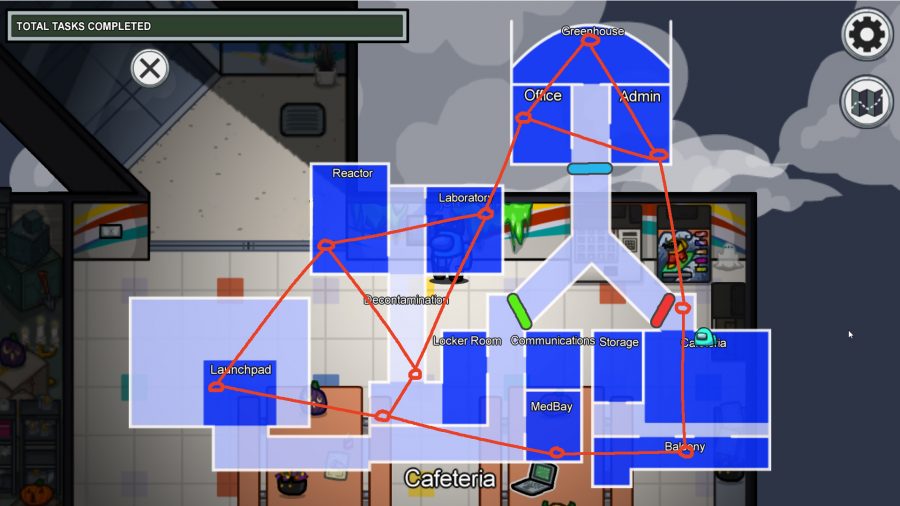 Mira is a smaller map, with an incredible vent system that is all interconnected, as you can see in the diagram above. Someone catch you venting? No need to chase them – hop back in and cut them off before they make it to the cafeteria, where the emergency button is. There aren’t any security cameras in Mira HQ – instead, there’s a door log, which is notoriously difficult to use.

Here’s how to use Among Us door logs in Mira HQ. There are three sensors in Mira HQ, at the three entrances and exits to the skywalk: green/southwest, red/southeast, and blue/north. When a player walks past one of these sensors, an entry will appear in the log. However, each player can only trigger an individual sensor once every five seconds, so if someone walks through it and then immediately back the other way, it won’t show another entry. Regardless, it’s still a useful tool to gather information to cross reference with players’ claims in order to find the impostor.

There’s only one visual task on Mira HQ, which is Submit Scan in MedBay. There are Empty Garbage, Clear Asteroids, and Prime Shields tasks, but these do not have any visual components in Mira HQ. Mira HQ sabotages are Oxygen, Reactor, Communications, Lights, and Doors. Unlike other maps, Communications on Mira HQ requires players to enter PINs at two separate locations on the map to get it working again. It’s also important to note that the windows in the Laboratory are actually one-way glass. If you’re inside, you can’t see out; but if you’re outside, you can see in. A more detailed map of Mira HQ has been made by Reddit user u/Vici_Finis. 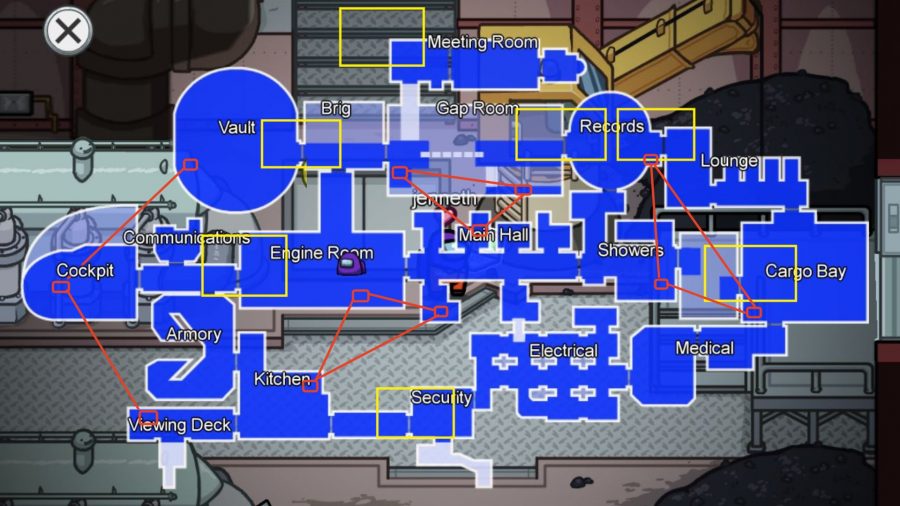 The Among Us new map is The Airship. It’s the biggest map yet, with several new room types and tasks. There are also a couple of new movement mechanics; there are ladders between certain rooms, and there’s a floating platform which you need to stand on to traverse the aptly named ‘gap room’.

At the start of each round, you’re given a choice of three spawn locations, to make your journey a little easier – if you can remember where your tasks are, of course. The map is so large, it’s difficult to get caught as an impostor, as the vent network allows you to escape to somewhere nobody will see you. However, crewmates have a useful camera network, vitals, and admin tools to monitor the situation.

There are currently no Airship visual tasks. The Airship sabotages are: Communications, Lights, Doors, and Avert Crash Course, which requires two people to enter the same code in two separate interfaces, either side of the gap room.

Now you should be able to masterfully navigate your way through all the Among Us maps – the next step in your training is to check our Among Us crewmate guide and Among Us impostor guide so you’re prepared for victory – and we’ve also got a guide to the best Among Us settings for a fair game. Happy stabbing and/or sleuthing.