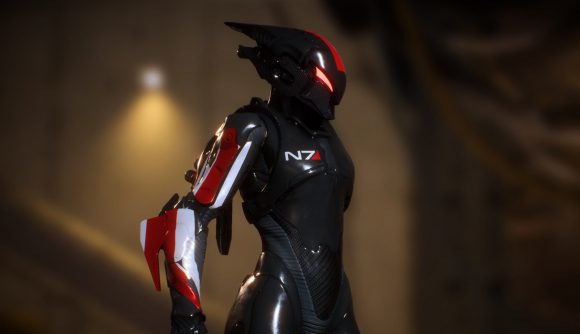 BioWare’s focus is squarely on Anthem right now, but the studio’s taken time to give a bit of love to Mass Effect here on November 7 – or N7 Day. Those considerations will go into Anthem itself, too, and the studio has given us a closer look into one particular detail: an N7 armour look to bring some Shepard-approved flavour to your Javelin.

Producer Mike Gamble tweeted an image of the N7 look earlier today, saying “they celebrate N7 Day in Fort Tarsis too!” It appears to be customization option for the Interceptor class, though that likely won’t be the only one.

If you’ve been following Anthem closely, you may recall that this tweet isn’t the first time we’ve seen an N7-themed armour customization. One showed up for the Ranger during a stream, and it seems likely that this option will be available no matter which Anthem Javelin you want to play. (And don’t worry about paying extra, since Mark Darrah confirmed all such options can be earned in-game.)

Crossover armour options have been around for years in BioWare games, going back to Dragon Age’s Blood Dragon armour showing up in the latter parts of the Mass Effect trilogy.

It’s no replacement for a new Mass Effect game, but BioWare has plans on that front, too. Just don’t expect to see the fruits of those labours for many years to come.