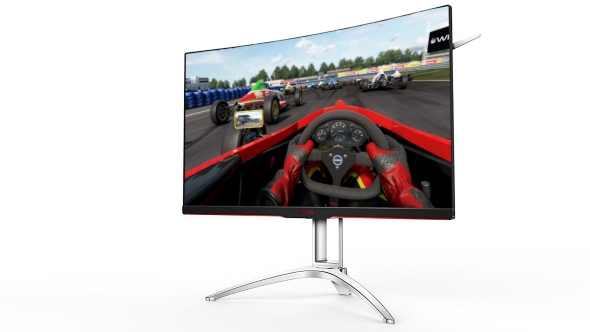 Ultra HD, 4K, call it what you will, I can pretty much guarantee that most of the people stopping by PCGamesN on any given day will not own a gaming rig capable of delivering a satisfying experience at 3840 x 2160. You probably will be able to nail 1440p, however, and that’s where AOC’s brilliant new big-screen AGON comes in.

Read more: check out our pick of the best gaming monitors around today.

I’ve been using a 30-inch, 2560 x 1600, Dell IPS monitor on my desktop rig for the past decade (that’s why it’s worth spending the money on a quality monitor – they should last longer than any of your PC builds) and the extra immersion that comes with big-screen gaming, where your face is almost pressed up against the panel, is tough to beat.

But, despite my display being over ten years old now, finding a monitor with a diagonal display over 27-inches has long been a real challenge. For whatever reason panel manufacturers haven’t felt confident they could sell enough big-screen displays to justify their creations. It’s largely the same now, and the few large scale panels you can find are generally given over to the dubious promise of 4K and it’s frame-rate-killing native resolution.

Thankfully, AOC have stepped into the breach with their 32-inch AGON AG322QCX – a 16:9 VA monitor with a 1440p native resolution, adaptive-sync support, a 144Hz refresh rate, and a price tag that might make you question dropping nigh on $800 on a smaller Asus ROG Swift. 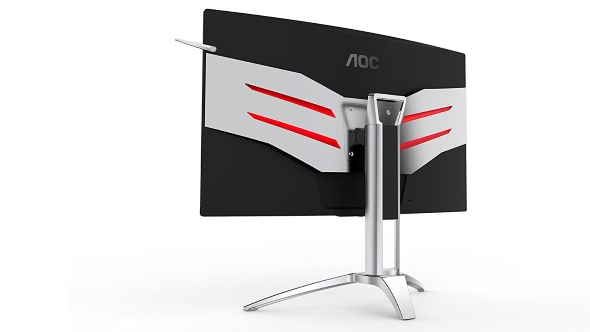 At $430 (£470), the AGON is considerably cheaper and arguably gives a more arresting gaming experience, especially if you’re rocking AMD graphics silicon inside your PC. Given the price tag you can probably guess there’s no G-Sync module lurking inside this AGON monitor, but the FreeSync support is there to give 144Hz of frame smoothing for your gaming pleasure.

Given the choice between a 32-inch native 1440p display with a high refresh rate, and a similarly priced 27-inch 4K screen stuck resolutely at 60Hz, the gaming choice is surely obvious. The extra fidelity of 4K gaming only just starts to become visible at this scale, but having a much smoother frame rate is always going to deliver a far more pleasurable experience in your favourite games.

Unless, of course you’re rocking a pair of GTX 1080 Ti cards, in which case I’d be saving my cash for a 4K G-Sync HDR panel. Whenever they turn up…

Now, the VA panel inside the 32-inch AGON isn’t perfect. While the colour contrast is excellent the black levels leave a little to be desired. At the darker end of the spectrum, the panel’s blacks get crushed together, meaning you’ll miss a little detail down there. You can improve that with the classic AOC Bright Frame setting, but while that does lighten things up, it also washes the screen’s image out. It’s a little odd for a VA panel as they’re normally a lot better at dealing with different levels of black, this looks more like an IPS in that regard. The white saturation is a different story, allowing some clear distinctions between the brightest tones. 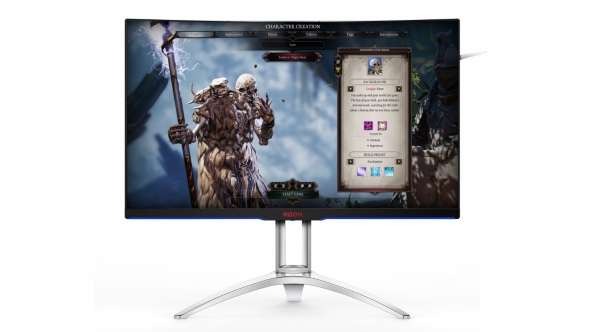 The viewing angles aren’t perfect either, which can be a little bit of an issue on a curved monitor like this. It’s not hugely noticeable in general use, but when there are large, uniform blocks of colour on the screen you can see a discolouration at the extreme edges of the panel.

But no monitor panel is perfect… well, ok the one used by the likes of Asus, Acer, and Viewsonic in our favourite gaming screens is close, and what I’ve seen of the next-gen HDR displays has had me salivating, but then we’re talking about monitors which cost close to twice, or even three or four times, as much.

If you’re after an affordable, immersive big-screen PC gaming experience then the AOC AGON AG322QCX has definitely got to be part of the conversation. You don’t have to spend a fortune on some ultra-enthusiast graphics card to have this sort of impact, just a mid-range card and this vibrant 1440p 32-inch panel will see you right.